Challenges of delivering High Speed 2 and other major infrastructure projects

Professor Douglas Oakervee, regarded as one of the United Kingdom’s most distinguished civil engineers with vast international experience in the delivery of major projects, will be speaking.

No matter where in the world major infrastructure projects are needed for the operation of a society or enterprise, they often face major challenges from their conception to operational service. Despite the importance that governments, developers or sponsors may attach to their scheme, most meet resistance from groups within society at some point in their development.

This talk will examine the tensions that have to be managed between the three key areas of politics, analysis/evidence and delivery together with behavioural cultures. Although I shall be focusing largely on the delivery of High Speed 2 (HS2) I will also briefly consider other major projects both in the UK and overseas to draw comparisons and parallels.

In 2019 The Prime Minister invited me to undertake a review of HS2 before he was prepared to give HS2 Limited the “Notice to Proceed” which he did in April 2020. The review had to be completed within a short period but nevertheless made some 63 recommendations to Government, most of which have been, or are, in the throes of being adopted. I will highlight some of the key issues and challenges that emerged from the review.

Major projects of the past have not had to contend with the environmental demands that recent legislation demands and which HS2 is currently endeavouring to meet. Therefore, these new challenges present a learning curve in some areas, which will determine standards that will either be adopted or bettered on subsequent phases of HS2, as well as other major projects in the future. Further, I will attempt to explore some of the major construction reforms needed to take full advantage of innovation and the development of smart construction methods currently being driven by the digital twin, robotics and artificial intelligence.

At this point in time this lecture cannot ignore the fact that since HS2 was conceived in 2008 the UK has moved on and circumstances are now very different. Brexit is behind us, but the full extent of its impact has yet to be understood. In addition, along with the rest of the world we are fighting a global pandemic. In the light of these events many wish to challenge the purpose and continuation of HS2 and would prefer to see the huge investment involved redirected into other important sectors.

However, transport connectivity is vital to economic growth, job creation, building housing, and social cohesion. This government has recognised this with its commitments to ‘building back better’ and to the levelling up agenda. In this context, I believe Government see HS2 to be a key component in reaching its goals. 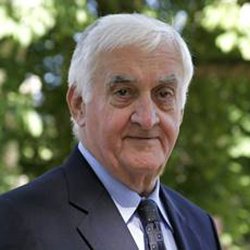 Douglas Oakervee regarded as one of the United Kingdom’s most distinguished civil engineers with vast international experience in the delivery of major projects.

He has had an exciting career since he first started in the industry in 1957 as an apprentice carpenter. In 1963, he grasped the opportunity to join Charles Brand & Sons Limited where he undertook his professional training as a civil engineer under the late James Rennie and became chartered in 1969. During this period Douglas was involved in the design and construction of major tunnel and marine projects in both the UK and Ireland.

He joined the Hong Kong Mass Transit Railway Authority in 1975 and supervised the design and construction of the Railway in North Kowloon and the Tsuen Wan Extension from Yau Ma Tei to Lai King. He left the MTR in late 1981 and after a short spell with Kumagai Gumi of Japan started his own company, Oakervee Perret & Partners, and later EHC Project Management Co.Ltd.

The major works undertaken in Hong Kong were the Tai Po Gas Reforming Works and associated submarine pipelines, the Eastern Harbour Crossing for both road and rail and the elevated Kwun Tong bypass. The company also designed part of London’s Jubilee Line Extension in a joint venture with Babtie, who in 1991 purchased the companies upon Douglas’s appointment to the Hong Kong Airport Authority as project director. In this position he was responsible for planning, design, procurement and construction of Chek Lap Kok International Airport - on a man made island in the South China Sea. He returned to the UK in 1999 after its completion.

In February 2004, he became Director for P&O’s London Gateway Port and from December 2005 he was appointed Executive Chairman of Crossrail Ltd until his retirement in May 2009. Under his leadership Crossrail, the new railway across London linking east with west, obtained its £15.9 billion funding package, gained parliamentary approval, became a wholly owned subsidiary of Transport for London and he laid the foundations for the critical construction and delivery phase.

In July 2009, Laing O’Rourke Construction Hong Kong Ltd was established and as its chair he successfully established the business in South East Asia retiring in April 2017. The UK Secretary of State for Transport in 2012 appointed Douglas as non-executive chairman of High Speed 2 Limited and was charged with delivering the Hybrid Bill for HS2 phase 1, once achieved he stepped down from office on 31 December 2013. He has also advised Boris Johnson the Mayor of London on the Thames Estuary. He was until 31 December 2010 Chairman of Engineers Against Poverty and was the International President of the Lighthouse Club, the Construction Industry Charity from 2011 until April 2017. He is also the Institution of Civil Engineers Special Representative for China.

Currently he is a visiting professor to the University of Leeds and is chair of the Advisory Board of the University’s Institute of High-Speed Rail and System Integration. Until recently he was an expert witness on a major dispute over the design and construction of a mega airport in the Middle East. Currently he is advising two groups who have responded to the UK Government's call for new railways to be developed and funded by the private sector.

In 2019, the UK Prime Minister Boris Johnson asked him to lead an independent review into the High Speed 2 Project. The PM has accepted and is to implement 60 of the 63 recommendations included the OAKERVEE REVIEW.

He was awarded the OBE in 2000 and the CBE in 2010, made a fellow of the Royal Academy of Engineering in 2001 and in 2002 he was elected a fellow of the Smeatonian Society of Civil Engineers and in 2020 was installed as its president. In 2003, he was installed as The Institution of Civil Engineers 139th President. The institution awarded him the prestigious Gold Medal in 2008, the Baker Medal in 1994 and the Telford Medal in 1998; in 2014 he was elected Honorary Fellow, the highest honour that the Institution can bestow on an individual. Douglas was also inducted into the Hong Kong Institution of Engineers “2010 Hall of Fame”. In November 2013, he received a Hon DEng from Herriot Watt University.

If you have any questions about this keynote lecture then please contact Boulent Imam at b.imam@surrey.ac.uk.

This will be an online event held on Zoom.