New student accommodation ‘topped out’ by the Mayor

The University celebrated an important construction milestone during the ‘topping out’ ceremony of its new student residences, which brought the £75m development on its Manor Park campus closer to completion. 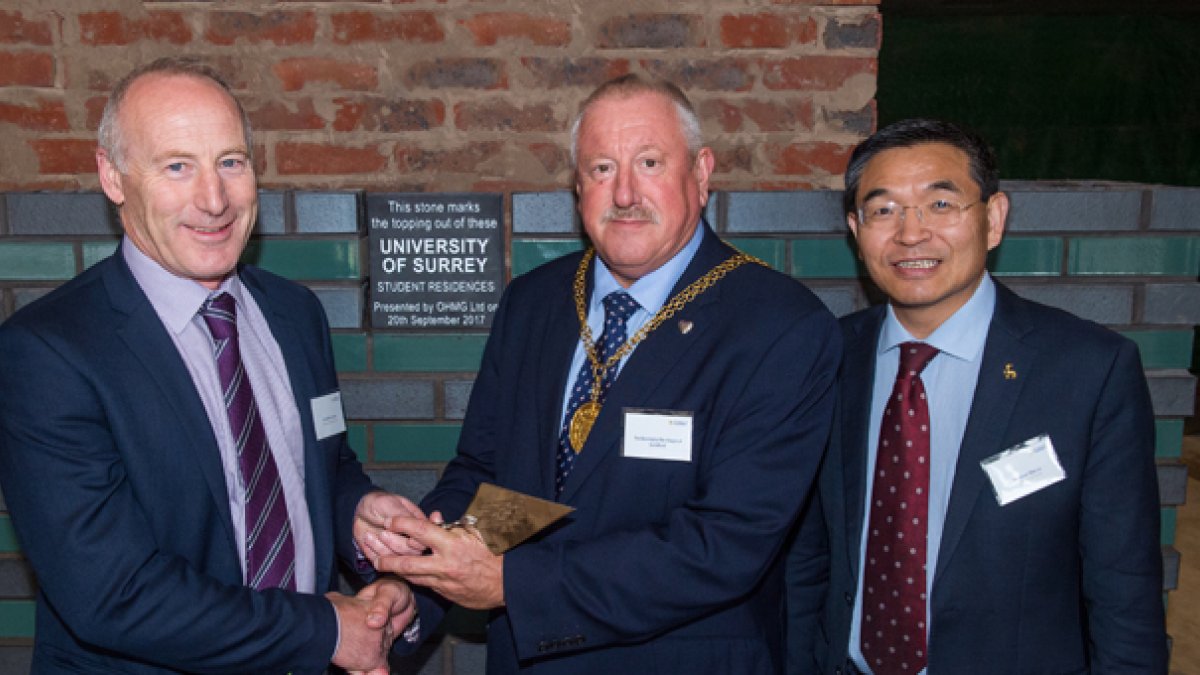 The ‘topping out’ ceremony is believed to originate from ancient Scandinavian religious ritual, where new buildings would need to appease the tree spirits displaced during construction. Today, these ceremonies are held to mark the structural completion of a building and to bring it good fortune. The University was delighted to welcome the Mayor of Guildford, Councillor Nigel Manning, to lay the final stone in the accommodation block and officially mark its external construction work as finished.

Among those attending the ceremony in September were representatives from the contractors, O’Hare McGovern Ltd, and the building’s architects, MJP Architects. Their design was shaped through consultation with local residents and will deliver a series of ‘barn style’ buildings arranged around interlinked courtyards, which will give a collegiate feel to the new student homes.

Speaking at the ceremony, Professor Max Lu, Vice-Chancellor of the University, thanked the Mayor for performing the ceremony and also the many people involved in bringing the project to fruition. Professor Lu said: “These new residences demonstrate the University’s commitment to high-quality accommodation for our students. They also help the local community by reducing housing pressure in Guildford.”

Construction of these high-quality student residences began in October 2016 next to the existing accommodation. The development brings the University’s investment in accommodation on its Manor Park campus to over £150m in campus since construction began in 2005.

The latest construction work is in line with the University’s plan to provide just over 4,000 rooms on the Manor Park campus by 2020. The University will be providing accommodation for more than 7,000 of its students across its Stag Hill and Manor Park campuses once this has been completed.