A new edition of Prosperity Without Growth – the landmark work by Professor Tim Jackson – was launched at a special event on 19 December at the University of Surrey, which also celebrated his appointment as 2016 Hillary Laureate. Professor Jackson is a leading figure in sustainability and the founder and Director of the Centre for the Understanding of Sustainable Prosperity (CUSP) at the Univers 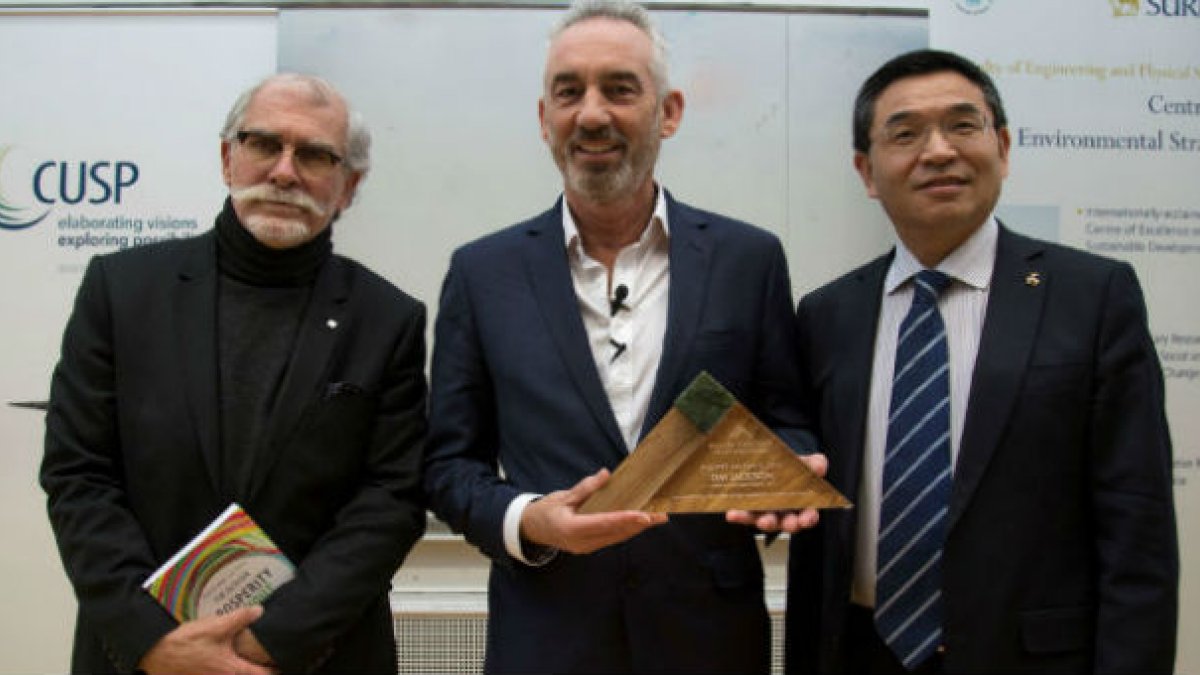 Prosperity Without Growth caused widespread controversy when it was first published in 2009. Outlining a vision for lasting prosperity on a finite planet, it openly questioned the most highly prized goal of politicians and economists alike: the continued pursuit of exponential economic growth.

In the new edition, Professor Jackson expands on his earlier principles, outlining how the economy of tomorrow could be built in ways which protect employment, facilitate social investment, reduce inequality and delivery both ecological and financial stability. He demonstrates that building a ‘post-growth’ economy is a precise and definable task, and sets out how this would affect the nature of enterprise, the quality of our working lives, the structure of investment and the role of the money supply.

Professor Jackson has been appointed 2016 Hillary Laureate in recognition of his exceptional leadership in the sustainability debate and his embodiment of the humanitarian commitment of Sir Edmund Hillary, founder of the Hillary Institute. The seventh global Hillary Laureate, Professor Jackson will be the first since the Institute moved its focus from ‘Climate Change and Climate Equity’ to ‘Capital for Change’.

Professor Jackson said: “I’m delighted that the Hillary Institute wishes to acknowledge my work with this award. I have a long-standing admiration for New Zealand’s ‘most famous son’ so it’s a particular honour to be recognised in this way.

“The success of Prosperity Without Growth was a real surprise back in 2009. Back then it was a radical narrative whispered by a marginal fringe. Today it’s an essential vision for social progress in a post-crisis world. Fulfilling that vision is simply the most urgent task of our times.”

In the seven years since Prosperity Without Growth was originally published, Professor Jackson’s ideas have gained a strong foothold not only among sustainability experts but also economists. Conventional economists have themselves begun to question whether economic growth can be sustained, while in 2014 Thomas Piketty’s book Capital in the 21st Century drew attention to rising inequality. In 2015, Professor Jackson was asked to provide input to the UN’s Sustainable Development Goals, aimed at putting a wider vision of prosperity on the table. More recently, the Paris Agreement on Climate Change has intensified the need to find economic solutions to environmental challenges.

Professor Jackson published the 2009 edition of Prosperity Without Growth when he was Economics Commissioner on the UK Sustainable Development Commission. He is currently Professor of Sustainable Development at the University of Surrey and Director of CUSP and – in addition to his scientific work – is a prize-winning dramatist with numerous radio writing credits for the BBC. Prosperity Without Growth – Foundations for the Economy of Tomorrow is published by Routledge.