NPL scientist, Robert Shearman, has been awarded the 2019 Institute of Physics Early Career Award for Nuclear Physics Research. Dr Shearman's research started during his time as a PGI student and involved a collaboration between NPL and the University of Surrey to design and build the National Nuclear Array, enabling NPL scientists to carefully characterise radioactive decay processes linked to nuclear fuel waste products and medical applications. 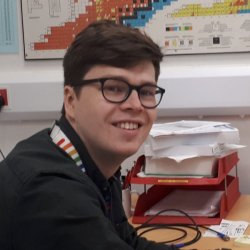 Robert also led, with Dr Giuseppe Lorusso, the data analysis portion of the first spectroscopic measurement of short-lived silver isotopes which are produced following nuclear fission at the RIKEN laboratory in Japan. This aspect of his work has applications both in understanding how nuclear fuel waste cools down and how the elements heavier than iron were created in explosive astrophysical explosions.

The resulting characteristic decay spectra have been published in the journal Physical Review C: Nuclear Physics as a Rapid Communication.

Early Career Awards are given annually by the IOP to the UK's most promising early-career researchers for their outstanding contributions in the field of nuclear physics. Following his PhD, Dr Shearman was appointed as a Higher Research Scientist in the Nuclear Metrology Group at NPL.

“It was great to be presented with the IOP Early Career Prize for my thesis work on nuclear metrology prior to my presentation in the 27th International Nuclear Physics Conference (INPC 2019), the biggest conference in the world for fundamental nuclear physics."