Surrey students have contributed to the European Space Agency’s ESEO (European Student Earth Orbiter) Mission which was launched in December 2018 in collaboration with the AMSAT-UK amateur radio organisation. 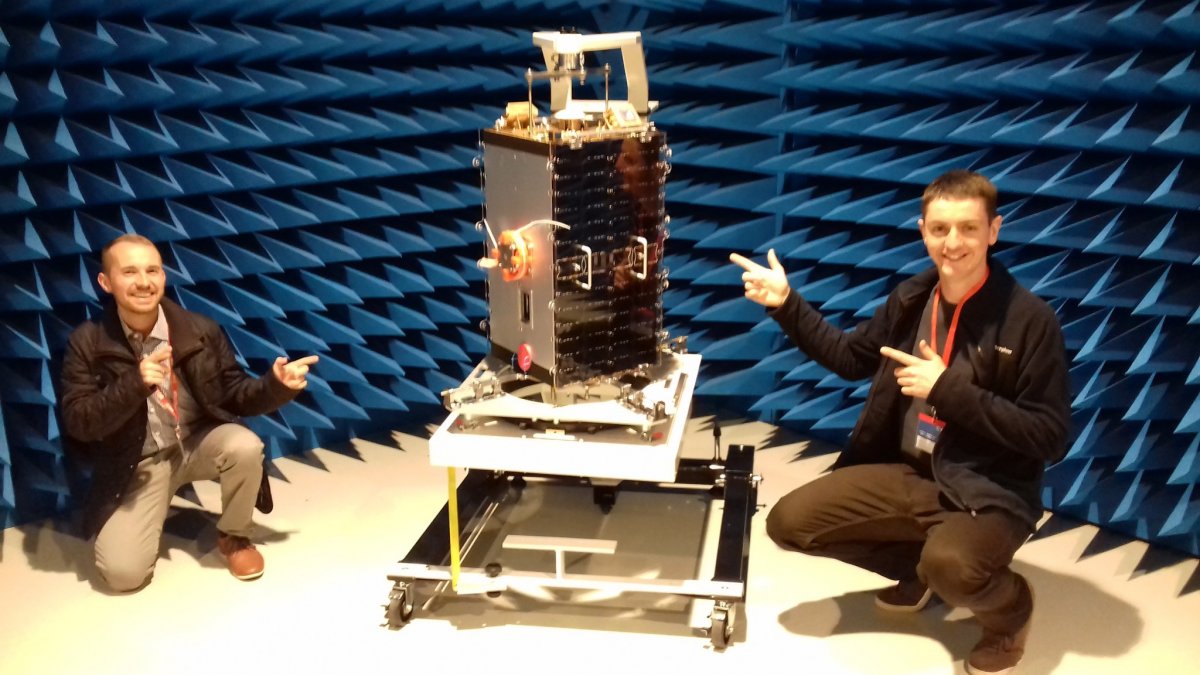 Jonas Holstiege and Peter Bartram with the final satellite.

Six students – who were studying for undergraduate and masters degrees at the time – took part in the work as part of their final year or masters projects, conducting research within the Surrey Space Centre (SSC) under the supervision of Dr Chris Bridges. The project has resulted in several research papers being published in prestigious journals including IEEE Xplore, with the students named as co-authors or contributors.

SSC’s part in the ESEO mission was to design and operate an educational communication payload using a transceiver which enables schools and colleges to receive data. On 12 April 2019, the transmitter was enabled for a period of nearly three hours in orbit and the data was successfully received by over ten stations around the world.

The Surrey students who participated in the ESEO project were Victor Lopes de Castro Martinelli, Eduardo Theves Lourenco, Ben Clewer and Ben Chapman (who all studied for a degree in Electronic Engineering with Space Systems), and Jonas Holtstiege and Peter Bartram (who studied for an MSc Space Engineering). Since completing their courses, three of the students are now undertaking PhDs, while Jonas Holtstiege has become payload systems engineer at Airbus Defence and Space.

Reflecting on his time at Surrey, Jonas said: “I was very fortunate to get the opportunity to work on this fascinating and meaningful project that allowed me to gain a lot of hands-on experience, publish my first scientific paper, and get an excellent job to start my career in the space industry. Knowing that the equipment we worked on day and night is now floating through space and working as planned is a fantastic feeling of success.”

Peter added: “I chose to study at Surrey because of the university's tight ties with industry but never expected to get the chance to work on actual flight hardware. Seeing the payload that we had all worked so hard on put into orbit and then receiving the first data transmissions from it made it all worthwhile though: not only was it a great feeling watching the rocket launch and receiving those first data packets but it also meant that we had successfully applied all of the theory we spent our masters learning.”

Dr Bridges said: “This was a great opportunity from ESA that’s rarely available to university students and I’m very proud of what they have achieved. Our part of the project worked perfectly, which is largely thanks to our dedicated Surrey staff, partners in AMSAT-UK, and the meticulous work of our students. Well done to all!”

Discover our courses in electrical and electronic engineering, including our BEng (Hons)/MEng Electronic Engineering with Space Systems and MSc Space Engineering.