Visit by Lord Neuberger to the School of Law

On Wednesday 13 March 2019, the School of Law was honoured to welcome Lord Neuberger of Abbotsbury, former President of the UK Supreme Court. The address - 'The Role of the Supreme Court in Turbulent Times' - marked the inaugural Toulson Law Lecture. 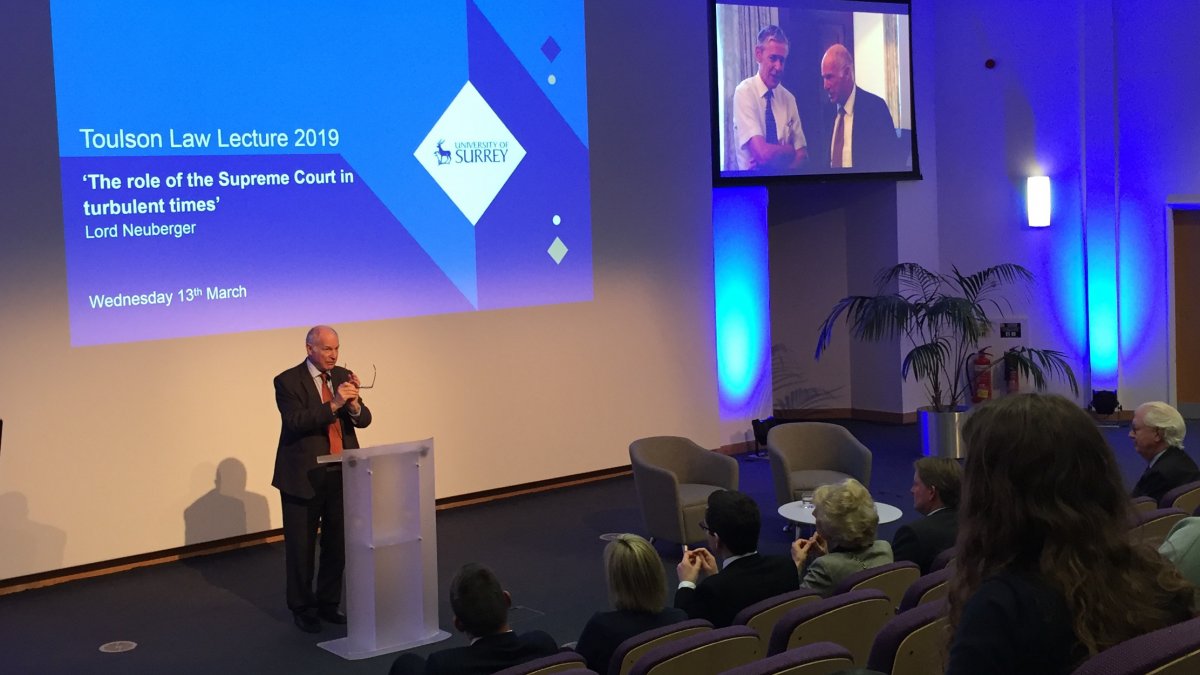 Lord Neuberger explained the role of the judiciary in interpreting and applying the law and referred to the Miller case to clarify this. Lord Neuberger also explored the changing landscape of the law, power of the supreme court and differences between the US and the UK judiciary systems.

Prior to the inaugural lecture at the Rik Medlik building, Lord Neuberger addressed the undergraduate and post-graduate students at the Toulson Law Library. Students were privileged with the opportunity to ask questions, learn from and be inspired by Lord Neuberger and Lady Elizabeth Toulson CBE DL.

Lord Neuberger had also worked alongside Lord Roger Toulson, a Distinguished Visiting Professor at the University of Surrey School of Law. Lord Toulson was notable for his superlative career at the Bar and on the bench. He was one of Britain’s foremost lawyers, and an intellectual leader within the Supreme Court.

He excelled in more than one area of the law and was well regarded for his work in criminal law, which had a major influence at the Law Commission, and in the senior courts in England and Wales. He published influential works in a number of areas including the law of complicity and the law of confidentiality. More generally, he was a defender of the importance of common law development, in the interests of human rights and dignity.

Having graduated as a scientist and spent three years as an investment banker, David Neuberger became a barrister in 1975, and in 1987 was appointed Queen’s Counsel. In 1996, he was appointed a High Court Judge, in the Chancery Division. In 2004, he was promoted to the Court of Appeal, and in 2007 he became a Law Lord. In 2009, he was appointed Master of the Rolls. In 2012, he became the President of the United Kingdom Supreme Court, from which he retired in September 2017.

Since 2010, Lord Neuberger has been a Non-Permanent Judge of the Hong Kong Court of Final Appeal; in January 2018, he became a Judge of the Singapore International Commercial Court. Lord Neuberger practises as an arbitrator from One Essex Court in the Temple, London. He is an honorary Fellow of the Royal Society, and an honorary member of the Royal Institution of Chartered Surveyors.

You can watch the video of Lord Neuberger's lecture here: