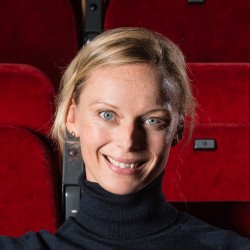 I joined the Guildford School of Acting at the University of Surrey in 2016. Before that I was a Research Fellow at Kingston University, where I was a lead organizer of the ‘Shakespeare and Scandinavia Conference’ at the Rose Theatre, Kingston and helped to set up the ‘Kingston Shakespeare Seminar in Theory’ for postgraduate and Early Career researchers. I gained my PhD in 2015 from Aarhus University, Denmark, where I taught on courses in the Departments of Dramaturgy and English. My PhD research was on cultural-historical conceptions of compassion in performances of Shakespearean and Early Modern drama and was awarded the Aarhus University Research Foundation PhD Award for extraordinary results. My current research continues to focus on Shakespeare, and particularly ways in which Shakespearean performance addresses current challenges related to intercultural dialogue, diversity and otherness, at global as well as local levels. I am interested in how creative practices and cultural institutions across the globe employ and transform Shakespeare’s works and cultural status, and in how we might think about ‘Global Shakespeare’ as an academic field and methodology. My close collaboration with HamletScenen, resident theatre at Kronborg Castle in Elsinore and host of a long-standing international theatre festival, has also sparked a strong interest in Shakespeare as a vehicle for cultural diplomacy and ‘soft power’.

My forthcoming collection of essays and interviews, Eating Shakespeare: Cultural Anthropophagy as Global Methodology was co-edited with long-term collaborators Dr Vinicius Mariano de Carvalho (KCL) and Dr Marcel Alvaro de Amorim (Federal Institute, Rio de Janeiro) and will be the first in a new book series by Arden/Bloomsbury entitled ‘Global Shakespeare Inverted’. The collection brings together scholars and creatives from across the globe to explore the Brazilian cultural theory of ‘Cultural Anthropophagy’ as a hermeneutic and creative model for shaping and understanding ‘Global Shakespeare’. It is thus not a book about Shakespeare in Brazil, as it were, but a book which applies a Brazilian way of transforming (or eating!) Shakespeare to case studies in, for example, Spain, Singapore and the UK. One of our key concerns is to explore a cultural theory from the so-called ‘Global South’, which challenges more Euro-centric ways of regarding Shakespeare and issues of otherness.

I am also preparing a monograph on Shakespeare, compassion and xenophobia, which draws on my doctoral research, but looks closely at ways in which contemporary Shakespearean performance praxis, trying to grapple with questions related to otherness and compassionate encounters, is appropriating and reconfiguring Shakespeare for the present.

I continue my close collaboration with HamletScenen and its international Shakespeare Festival in Elsinore; a collaboration which began in 2016, when I produced and curated an exhibition on the history and identity of the festival and Elsinore’s links with Hamlet and Shakespeare, supported by the Danish Embassy in the UK. The history, which goes back to the nineteenth century, is a unique example of Shakespearean performances at the centre of intercultural relations, involving trade and diplomatic alliances, not least during the twentieth century and World War II. The exhibition was shown at King’s College London in 2016 as part of the Shakespeare400 Festival and World Shakespeare Congress. It was shown in Elsinore later the same year, and in 2017 as part of the York International Shakespeare Festival. In 2019, the exhibition will be shown in Washington DC in collaboration with the Danish Embassy to the US.

Refskou A, Thomasen LS (2014) Handling the Theme of Hands in Early Modern Cross-over Contexts, Early Modern Culture Online 5 pp. 31-51
Early modern culture incorporated the human hand
into a large number of different visual-textual
contexts: in religious imagery, in scientific
illustrations, in manuals of various disciplines, as
manicules in manuscripts and printed books, and
with several functional and/or figurative
significances in the literature and drama of the
period. Hands seem to be thrusting themselves into
these contexts as powerful reminders of a human
agency, which is often both somatic and spiritual at
the same time: in the human hand, relations
between body and mind converge and contest in
complex and multiple ways. As described by Claire
Sherman in the exhibition catalogue Writing on
Hands: Memory and Knowledge in Early Modern
Europe, the early modern hand is ?a meeting place
of matter, mind, and spirit?. This meeting
place is, in several different ways, the implied
setting for the following article. Some hands, such as
Albrecht Dürer?s Praying Hands (1508) or
Michelangelo?s meeting hands of God and Adam on
the Sistine Chapel ceiling (1508-1512), have
become enduring and familiar icons of visual
culture; and of course, Dürer?s and Michelangelo?s
hands are found within religious contexts in which
the hand has always played vital roles related to
matter, mind and spirit. However, besides the vast
field of religious studies, there are more and other
hands offering rich sites for exploring early modern
chiasms of body and mind. In the following
analyses of examples from early English cross-over
contexts, our purpose is to highlight and discuss the
ways in which the hand and in particular two of its most familiar functions ? pointing and touching ?
may illuminate wider epistemological discourses
that shift back and forth throughout the period:
discourses on what a human being is and how
humans perceive and understand the world they
live in. Central here are questions as to how and
where human perception and cognition take place;
in the mind or in the body; or to be more precise:
how bodies and minds are understood in relation to
each other by early modern thinkers. We present an investigation of a selection of
examples which span the dramatic writing of the
period: from issues of the hand in two early
Shakespearean tragedies, Titus Andronicus (c. 1594)
and Romeo and Juliet (c. 1597), to Hamlet (c. 1602);
to the medical sciences, William Harvery?s de Motu
Cordis (1628); and to John Bulwer?s manuals on
gesture, Chirologia and Chironomia (1644). Extracts
from Bulwer?s manuals are a
Refskou A (2015) Compassionate Perception and Touching Experiences in Shakespearean Drama, Critical Survey 27 (1) pp. 60-84 Berghahn Journals
DOI: 10.3167/cs.2015.270104
This article explores examples of emotion and perception in a number of Shakespearean dramas. It discusses compassionate perception as a process of synaesthesia, referring to recent theoretical strands from fields such as the cultural history of emotions and historical phenomenology, and consults early modern sources, such as Thomas Wright?s The Passions of the Minde in Generall (first published in 1601). Focusing especially on the relation between compassion ? here literally defined as shared emotion ? and tactility, it discusses what the familiar notion of being emotionally ?touched? (or ?moved?) implies in an early modern context. Locating ?touching experiences?, potentially produced by performances of plays such as Titus Andronicus, the article, at the same time, places such experiences in the context of contemporaneous contesting cultural discourses on whether such experiences might be considered beneficial and instructive to the minds and bodies in the auditorium or whether they might have the reverse effect as both morally and physically corruptive.
Refskou Anne-Sophie (2017) Whose castle is it anyway? Local/global negotiations of a Shakespearean location, Multicultural Shakespeare 15 (1) pp. 121-132 De Gruyter Open
DOI: 10.1515/mstap-2017-0009
Kronborg Castle in the Danish town of Elsinore is a location strongly associated with Shakespeare thanks to the setting of Hamlet. It is a place where fiction currently eclipses history, at least in the context of a cultural tourist industry where Shakespeare?s name is worth a great deal more than Danish national heritage sites. Indeed, Kronborg is now widely marketed as ?Hamlet?s Castle? and the town of Elsinore has acquired the suffix ?Home of Hamlet?. This article examines the signifiers implied in the naming and renaming of Kronborg as a Shakespearean location, while also looking at its unique international Shakespearean performance tradition, which spans two centuries. It describes how the identity of the castle has been shaped by its Shakespearean connection against the backdrop of changing ideologies in the twentieth and twenty-first centuries, and poses questions as to how this identity may continue to develop within the current contexts of renewed nationalism in Europe and the world.

‘“Not where he eats, but where he is eaten” : Rethinking Otherness in (British) Global Shakespeare’ (chapter, forthcoming April 2019). Author: Anne Sophie Refskou