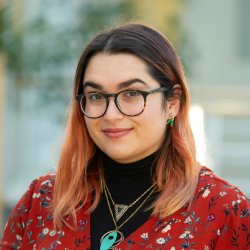 I am currently a postdoctoral researcher in the CoGDeV Lab on a project with Emily Farran and Camilla Gilmore. We are studying the relationship between Lego construction ability, spatial thinking, and numeracy achievement.

​I'm passionate about methods for studying development, and how we can do better, more transparent, reproducible, and diverse science.

​I spend my time between Surrey (where I work), London (where I live), and Preston (where my wife lives). So, the best place to find me is on a train. I enjoy walking in nature, watching trashy TV, and cooking.

Marina Bazhydai, Priya Silverstein, Eugenio Parise, Gert Westermann (2020)Two-year-old children preferentially transmit simple actions but not pedagogically demonstrated actions, In: Developmental Science Wiley
DOI: DOI: 10.1111/desc.12941
Children are sensitive to both social and non-social aspects of the learning environment. Among social cues, pedagogical communication has been shown to not only play a role in children's learning, but also in their own active transmission of knowledge. Vredenburgh, Kushnir and Casasola, Developmental Science, 2015, 18, 645 showed that 2-year-olds are more likely to demonstrate an action to a naive adult after learning it in a pedagogical than in a non-pedagogical context. This finding was interpreted as evidence that pedagogically transmitted information has a special status as culturally relevant. Here we test the limits of this claim by setting it in contrast with an explanation in which the relevance of information is the outcome of multiple interacting social (e.g., pedagogical demonstration) and non-social properties (e.g., action complexity). To test these competing hypotheses, we varied both pedagogical cues and action complexity in an information transmission paradigm with 2-year-old children. In Experiment 1, children preferentially transmitted simple non-pedagogically demonstrated actions over pedagogically demonstrated more complex actions. In Experiment 2, when both actions were matched for complexity, we found no evidence of preferential transmission of pedagogically demonstrated actions. We discuss possible reasons for the discrepancy between our results and previous literature showing an effect of pedagogical cues on cultural transmission, and conclude that our results are compatible with the view that pedagogical and other cues interact, but incompatible with the theory of a privileged role for pedagogical cues.
Priya Silverstein, Gert Westermann, Eugenio Parise, Katherine Twomey (2019)New evidence for learning-based accounts of gaze following: Testing a robotic prediction, In: Proceedings 2019 Joint IEEE 9th International Conference on Development and Learning and Epigenetic Robotics (ICDL-EpiRob)pp. pp 302-306 IEEE
DOI: 10.1109/DEVLRN.2019.8850716
Gaze following is an early-emerging skill in infancy argued to be fundamental to joint attention and later language. However, how gaze following emerges has been a topic of great debate. The most widely-accepted developmental theories suggest that infants are able to gaze follow only by understanding shared attention. Another group of theories suggests that infants may learn to follow gaze based on low-level social reinforcement. Nagai et al. [Advanced Robotics, 20, 10 (2006)] successfully taught a robot to gaze follow purely through social reinforcement, and found that the robot learned to follow gaze in the horizontal plane before it learned to follow gaze in the vertical plane. In the current study, we tested whether 12-month-old infants were also better at gaze following in the horizontal than the vertical plane. This prediction does not follow from the predominant developmental theories, which have no reason to assume differences between infants’ ability to follow gaze in the two planes. We found that infants had higher accuracy when following gaze in the horizontal than the vertical plane (p = .01). These results confirm a core prediction of the robot model, suggesting that children may also learn to gaze follow through reinforcement learning. This study was pre-registered, and all data, code, and materials are openly available on the Open Science Framework (https://osf.io/fqp8z/).
Priya Silverstein, Teodora Gliga, Gert Westermann, Eugenio Parise (2019)Probing communication-induced memory biases in preverbal infants: Two replication attempts of Yoon, Johnson and Csibra (2008), In: Infant Behavior and Development55pp. 77-87 Elsevier Ltd
DOI: 10.1016/j.infbeh.2019.03.005
In a seminal study, Yoon, Johnson and Csibra [PNAS, 105, 36 (2008)] showed that nine-month old infants retained qualitatively different information about novel objects in communicative and non-communicative contexts. In a communicative context, the infants encoded the identity of novel objects at the expense of encoding their location, which was preferentially retained in noncommunicative contexts. This result had not yet been replicated. Here we attempted two replications, while also including a measure of eye-tracking to obtain more detail of infants’ attention allocation during stimulus presentation. Experiment 1 was designed following the methods described in the original paper. After discussion with one of the original authors, some key changes were made to the methodology in Experiment 2. Neither experiment replicated the results of the original study, with Bayes Factor Analysis suggesting moderate support for the null hypothesis. Both experiments found differential attention allocation in communicative and noncommunicative contexts, with more looking to the face in communicative than non-communicative contexts, and more looking to the hand in non-communicative than communicative contexts. High and low level accounts of these attentional differences are discussed.