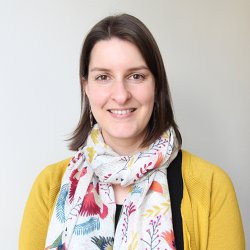 Faculty of Health and Medical Sciences, School of Veterinary Medicine.

I am currently a Research Fellow at The University of Surrey with a interest in biofilm formation on abiotic surfaces and interactions within bacterial communities. My current research project focuses on the interactions of the gut microbiota with Salmonella Typhimurium. I also have a interest in interactions between human oppertunistic pathogens, in particular Cutibacterium acnes, Staphylococcus aureus and Staphylococcus epidermidis.

I obtained my PhD at the Institute of Food Research, Norwich studying biofilm formation within the food chain by Campylobacter jejuni. I have since also worked on the use of natural antimicrobials to combat biofilm formation and the use of modified titanium surfaces to reduce bacterial attachment. Prior to starting my PhD, I worked for six years in drug development, performing cell based assays to assess biological safety and potency.

To develop a staining method for specific detection of metabolically active (viable) cells in biofilms of the foodborne pathogen Campylobacter jejuni.

Staining with TTC allows for the quantification of metabolically active Camp. jejuni and thus allows for quantification of viable cells in biofilms and food matrices. The TTC staining method can be adapted to quantify bacterial cell concentration in a food matrix model, where the accepted method of A600 measurement is not suitable due to interference by components of the food matrix.

Significance and Impact of the Study

2,3,5 Triphenyltetrazolium chloride (TTC) staining is a low‐cost technique suitable for use in biofilm analysis, allowing rapid and simple imaging of metabolically active cells and increasing the methods available for biofilm assessment and quantification.
Helen L Brown, Kate Hanman, Mark Reuter, Roy P Betts, Arnoud HM Van Vliet (2015). Campylobacter jejuni biofilms contain extracellular DNA and are sensitive to DNase I treatment
View abstract View full publication
Biofilms make an important contribution to survival and transmission of bacterial pathogens in the food chain. The human pathogen Campylobacter jejuni is known to form biofilms in vitro in food chain-relevant conditions, but the exact roles and composition of the extracellular matrix are still not clear. Extracellular DNA has been found in many bacterial biofilms and can be a major component of the extracellular matrix. Here we show that extracellular DNA is also an important component of the C. jejuni biofilm when attached to stainless steel surfaces, in aerobic conditions and on conditioned surfaces. Degradation of extracellular DNA by exogenous addition of DNase I led to rapid biofilm removal, without loss of C. jejuni viability. Following treatment of a surface with DNase I, C. jejuni was unable to re-establish a biofilm population within 48 h. Similar results were obtained by digesting extracellular DNA with restriction enzymes, suggesting the need for high molecular weight DNA. Addition of C. jejuni genomic DNA containing an antibiotic resistance marker resulted in transfer of the antibiotic resistance marker to susceptible cells in the biofilm, presumably by natural transformation. Taken together, this suggest that eDNA is not only an important component of C. jejuni biofilms and subsequent food chain survival of C. jejuni, but may also contribute to the spread of antimicrobial resistance in C. jejuni. The degradation of extracellular DNA with enzymes such as DNase I is a rapid method to remove C. jejuni biofilms, and is likely to potentiate the activity of antimicrobial treatments and thus synergistically aid disinfection treatments.
Mark Reuter, Paula Maria Periago, Francis Mulholland, Helen Louise Brown, Arnoud HM Van Vliet (2015). A PAS domain-containing regulator controls flagella-flagella interactions in Campylobacter jejuni
View abstract View full publication
The bipolar flagella of the foodborne bacterial pathogen Campylobacter jejuni confer motility, which is essential for virulence. The flagella of C. jejuni are post-translationally modified, but how this process is controlled is not well understood. In this work, we have identified a novel PAS-domain containing regulatory system, which modulates flagella-flagella interactions in C. jejuni. Inactivation of the cj1387c gene, encoding a YheO-like PAS6 domain linked to a helix-turn-helix domain, resulted in the generation of a tightly associated “cell-train” morphotype, where up to four cells were connected by their flagella. The morphotype was fully motile, resistant to vortexing, accompanied by increased autoagglutination, and was not observed in aflagellated cells. The Δcj1387c mutant displayed increased expression of the adjacent Cj1388 protein, which comprises of a single endoribonuclease L-PSP domain. Comparative genomics showed that cj1387c(yheO) orthologs in bacterial genomes are commonly linked to an adjacent cj1388 ortholog, with some bacteria, including C. jejuni, containing another cj1388-like gene (cj0327). Inactivation of the cj1388 and cj0327 genes resulted in decreased autoagglutination in Tween-20-supplemented media. The Δcj1388 and Δcj0327 mutants were also attenuated in a Galleria larvae-based infection model. Finally, substituting the sole cysteine in Cj1388 for serine prevented Cj1388 dimerization in non-reducing conditions, and resulted in decreased autoagglutination in the presence of Tween-20. We hypothesize that Cj1388 and Cj0327 modulate post-translational modification of the flagella through yet unidentified mechanisms, and propose naming Cj1387 the Campylobacter Flagella Interaction Regulator CfiR, and the Cj1388 and Cj0327 protein as CfiP and CfiQ, respectively.
Victoria L Marlow, Tristan MacLean, Helen Brown, Taryn B Kiley, Nicola R Stanley-Wall (2013). Blast a biofilm: a hands-on activity for school children and members of the public
View abstract View full publication
Microbial biofilms are very common in nature and have both detrimental and beneficial effects on everyday life. Practical and hands-on activities have been shown to achieve greater learning and engagement with science by young people. We describe an interactive activity, developed to introduce microbes and biofilms to school age children and members of the public. Biofilms are common in nature and, as the favored mode of growth for microbes, biofilms affect many parts of everyday life. This hands-on activity highlights the key concepts of biofilms by allowing participants to first build, then attempt to ‘blast,’ a biofilm, thus enabling the robust nature of biofilms to become apparent. We developed the blast-a-biofilm activity as part of our two-day Magnificent Microbes event, which took place at the Dundee Science Centre-Sensation in May 2010. This public engagement event was run by scientists from the Division of Molecular Microbiology at the University of Dundee. The purpose of the event was to use fun and interesting activities to make both children and adults think about how fascinating microbes are. Additionally, we aimed to develop interactive resources that could be used in future events and learning environments, of which the blast-a-biofilm activity is one such resource. Scientists and policy makers in the UK believe engaging the public with research ensures that the work of universities and research institutes is relevant to society and wider social concerns and can also help scientists actively contribute to positive social change. The activity is aimed at junior school age children (9–11 years) and adults with little or no knowledge of microbiology. The activity is suitable for use at science festivals, science clubs, and also in the classroom, where it can serve as a tool to enrich and enhance the school curriculum.