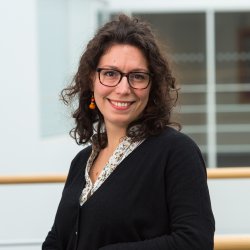 Lara joined Surrey Business School as a PhD student enrolled in a 4-year PhD programme in 2015.

She holds a MA degree in Intercultural Communication with International Business from University of Surrey (Distinction).

Lara is a PhD student in Management, Organisational Behaviour, at Surrey Business School.

Her PhD project deals with doctors’ ethical dilemmas in End-of-Life decision-making processes and she is interested in evaluating antecedents, dynamics and consequences of such dilemmas at the individual and organizational level.

Her supervisors are Dr. YingFei Heliot and Prof. Steve Woods.

Lara is a member of the European Association of Work and Organizational Psychology (EAWOP) and of the British Academy of Management (BAM).

She has finished the Graduate Teaching Certificate to become a Fellow of Higher Education Academy.

Carminati Lara, Heliot YingFei (2018) Doctors? Professional and Religious Identity Conflict: Micro and Macro Dynamics in End-of-Life Circumstances,British Academy of Management Conference 2018 BAM
This developmental paper reports a work in progress study. It aims at investigating microand macro-level processes related to doctors? professional/religious identity conflict in critical situations, such as End-of-Life (EoL) circumstances, and the consequences of such conflict on doctors? psychological well-being (PWB). It achieves this by testing in a multilevel, moderated mediation analysis four hypotheses in a two-wave study of doctors working in 30 NHS Trusts in England. By providing a holistic framework on identity conflict dynamics (its emergence, unfolding and individual consequences), this developmental paper has the potential to make two key contributions to the literature on identity and identity conflict as experienced by doctors in EoL circumstance. First, it clarifies micro-level conditions and mechanisms of professional/religious identity conflict in doctors and its impact on PWB. Second, by including ?extra-individual? forces as macro-level boundary conditions, namely organisational ethical climate, it extends identity theories with social information processing theory.
Carminati Lara (2018) Between ethics and law:: TNCs? behaviour in modern economic globalisation,Society and Business Review Emerald
DOI: 10.1108/SBR-04-2018-0032
Purpose -

The purpose of this article is to offer a critical and broad perspective on how transnational companies (TNCs) behave in the global context, focusing its attention on the controversial issue of tax avoidance in the UK. It pursues this aim by taking into account not only economic globalisation, mobility of capital and tax havens, but also ethics and corporate social responsibility.

This article seeks to provide an interdisciplinary viewpoint drawing not only from well-established scholarly literature but also from real cases and evidence, such as the scandals involving corporate giants, such as Starbucks, Google and Amazon in the UK.

This article highlights the fundamental interplay and mutual aid of ethics and international laws, underlining the increasing importance of corporate social responsibility principles in todays? business practices. However, it also emphasises the need of reinforcing these principles with either regional or universalistic legal approaches to tackle TNCs? misconduct in the international arena.

This article suggests that by establishing and enforcing international business laws, increasingly aligned with ethical principles, the gap between ethics and legislation can be consistently bridged. Hence, TNCs? behaviour could be more efficiently controlled.

The paper contributes to the literature on modern economic globalisation by providing a comprehensive and integrative perspective on TNCs? behaviour, accounting for the interplay of socio-ethical, legal and business principles.

Carminati Lara (2018) Generalizability in Qualitative Research: A Tale of Two Traditions,Qualitative Health Research28(13)pp. 2094-2101 SAGE Publications
DOI: 10.1177/1049732318788379
Generalizability in qualitative research has been a controversial topic given that interpretivist scholars have resisted the dominant role and mandate of the positivist tradition within social sciences. Aiming to find universal laws, the positivist paradigm has made generalizability a crucial criterion for evaluating the rigor of quantitative research. This positivist echo has led generalizability to acquire a quantitative meaning, inappropriate for describing qualitative studies. The purpose of qualitative research has thus been directed towards providing in-depth explanations and meanings rather than generalizing findings. Through a critical review of empirical and theoretical studies, this commentary seeks to show that in qualitative domains generalizability is possible provided that: first, generalizability is the main objective of the study; second, due precautions concerning the philosophy and terminology selected are taken. Hence, this commentary contributes to the literature on qualitative research by making suggestions for more consistent and unanimous procedures to adopt in qualitative inquiries.
Carminati L., Héliot Y. (2018) Between Multiple Identities and Ethical Dilemmas: Healthcare Professionals' Identity Conflict Perception and Ethical Behaviour in End-Of-Life Circumstances,The European Conference on Psychology & the Behavioral Sciences 2018: Official Conference Proceedings The International Academic Forum (IAFOR)

Therefore, through an interdisciplinary perspective integrating theoretical and empirical works in management/organisation studies and medical literature, this paper explores healthcare professionals? ethical identity conflicts perception and behaviour in EoL circumstances. To pursue this aim, a qualitative research methodology has been chosen. Semi-structured interviews (N=54) are conducted among healthcare professionals, implementing both theoretical sampling, to strengthen the rigour of the study, and random sampling, to ameliorate any potential selection bias. The tradition of thematic analysis is followed to analyse the data. Hence, by offering an in-depth understanding of how ethical conflicts are experienced by doctors and nurses and bringing new insights on healthcare professionals? behavioural consequences in terms of decision making and clinical practice, this paper enriches current works on ethical identity conflicts proposing findings and themes related to spiritual/religious identity, moral identity, procrastination of duties and absenteeism.