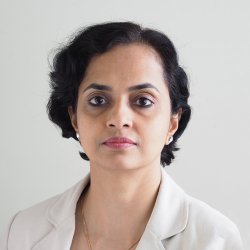 Dr. Mini C. Saaj is a Reader in Robotics, founder and head of the Robotics and Control research group and Ex-Director of Postgraduate Research (Ph.D.) Programme at the Surrey Space Centre (SSC), University of Surrey. Prior to taking up the academic position in 2007, she was a Post-Doctoral Research Fellow at SSC. Mini was a Visiting Research Associate at King's College London from 2005 to 2007 and a Post-Doctoral Research Fellow at the Technical University Hamburg-Harburg, Germany from 2002-2003.

Since starting her lectureship at the University of Surrey in 2007, Mini has coordinated and authored many successful research proposals, as Principal Investigator and Co-Investigator, in collaboration with over forty leading national and international research groups. She has raised over £3.8M, as PI and Co-I, on Robotics research funded by European Commission, Airbus Defence and Space, Surrey Satellite Technology Ltd, Engineering and Physical Science Research Council, European Space Agency, CEOI, Royal Society, Royal Academy of Engineering, the Nigerian Space Agency and other sources. She has successfully supervised 10 full-time post-doctoral Research Fellows, 11 PhD students and 2 MPhil students, in addition to serving as PhD internal and external examiner. She has published over eighty-eight peer-reviewed journals and conference papers. She is an external evaluator for various funding agencies, a Chartered Engineer with the Engineering Council UK, Fellow of the British Interplanetary Society UK, Senior Member of IEEE, Senior member of AIAA, a member of IEEE Robotics and Automation Society, IEEE Control Systems Society and IEEE Women in Engineering and a member of IET. Since 2002, she has been a reviewer of IEEE and IET journals and various international conferences. Mini is an invited speaker at various international conferences and workshops.

Mini is a Fellow of the Higher Education Academy, UK and she has several years of undergraduate and postgraduate teaching experience in subject areas like the Space Robotics, Control Systems, Power Electronics, Electrical Machines, Power System and Analogue Electronics. She has extensive experience in curriculum development and as the Electrical and Electronic Engineering (EEE) Pathway leader, she played the lead role in setting the Departmental strategy for “power” that enabled the University of Surrey to launch the EEE degree programme in 2014. In November 2013, she won the prestigious Vice Chancellor's Teaching Excellence Award. Prior to receiving this highest honour in teaching, she was also awarded the Learning and Teaching Award for the Faculty of Engineering and Physical Sciences in September 2013. In 2010, she won the EngineeringUK Flying Lecturer award and she has more than ten years of experience in public speaking and outreach projects. Since 2007, she is serving as a Science, Technology, Engineering and Mathematics (STEMNET) ambassador for the schools and colleges in the UK and continues to actively promote engineering and space education in the UK.

Mini received her BTech first class honours with distinction in Electrical and Electronics Engineering from the College of Engineering Trivandrum, India. She was awarded Masters degree in Control Systems with distinction and first rank by the same institute. In 2003, the Indian Institute of Technology Bombay, awarded a PhD for her work in the field of discrete-time sliding mode control.

Towards Innovative Surface Mobility Systems for Next Generation Planetary Rovers (funded by the Engineering and Physical Science Research Council and Airbus Defence and Space, UK)

'Active connector for spacecraft docking and self-assembly of small satellites'

'Nonlinear Bayesian Filtering Based on Mixture of Orthogonal Expansions'

- Forward acquisition of soil and terrain data for exploration rover

- Innovation in Teaching and Learning

Mini has established links with the following leading international groups: 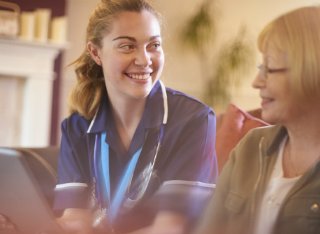 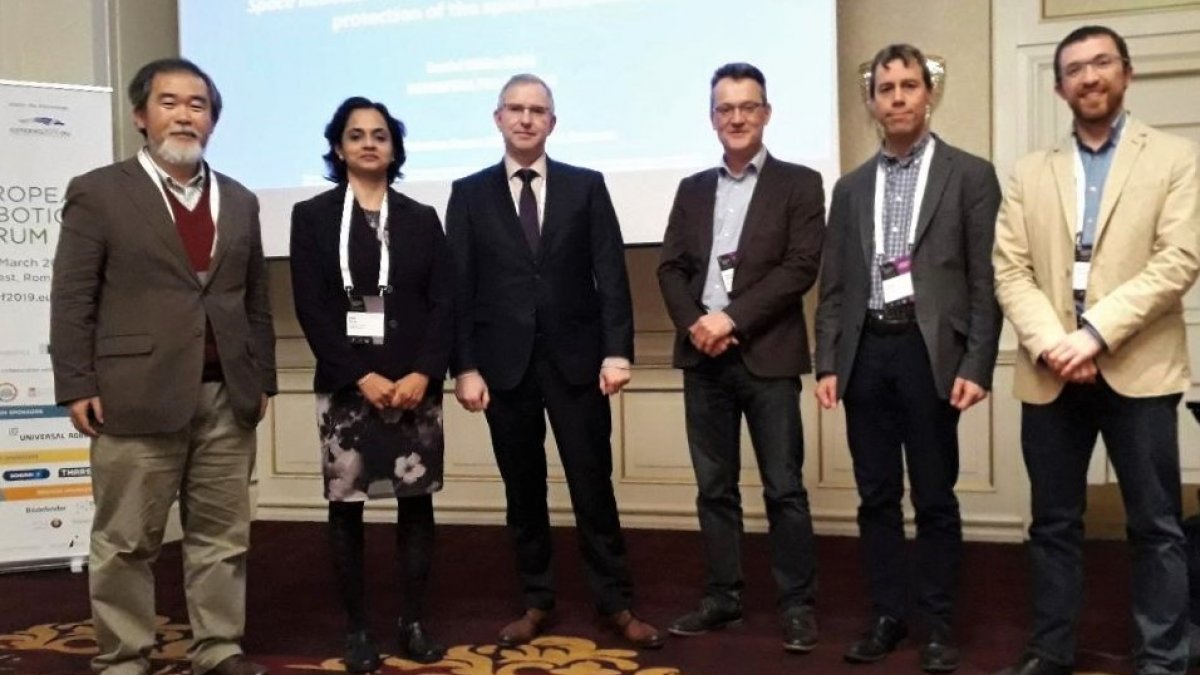 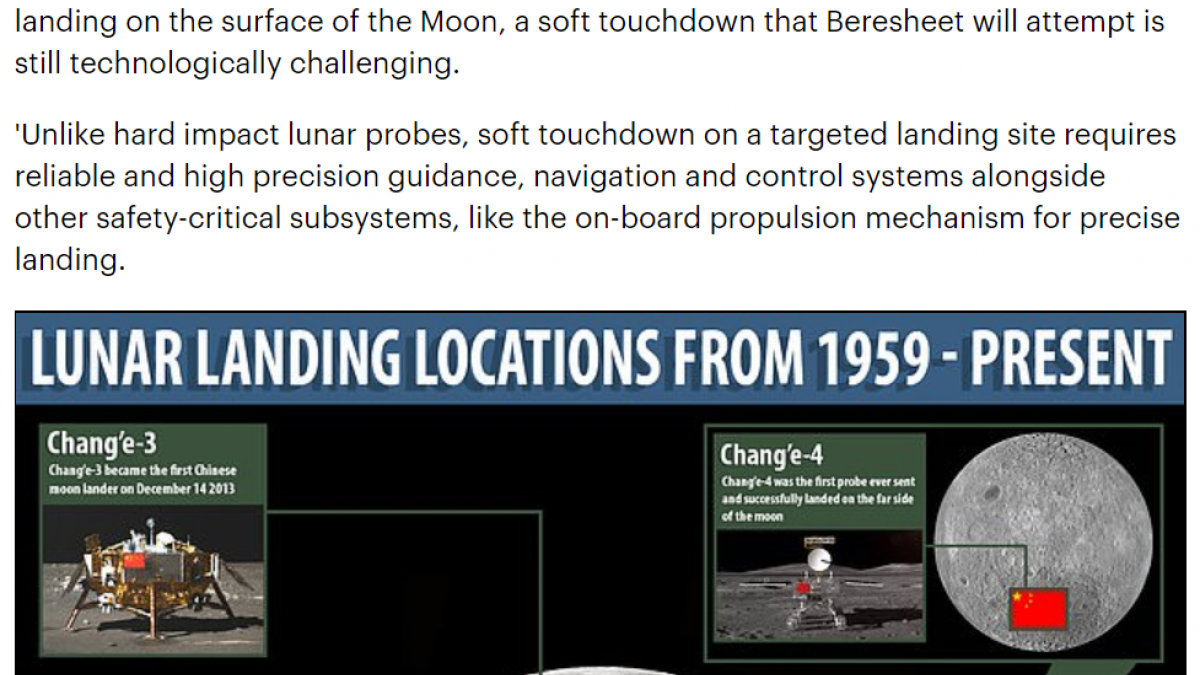 The use of soft robotics technology for practical applications requires modelling of the shape, movement and dynamics of the robot. Based on the literature, efforts in modelling the behaviour of this manipulator have focused mainly on kinematic modelling, while dynamics of the system is poorly studied which restricts the full potential of the technology. Another aspect that remains open is robust or stiffness control design of this pneumatically driven soft tube. Variable stiffness control is of prime importance to achieve the accuracy required to satisfy the desired position and force commands. Therefore, this research focused on the development of material-based dynamic modelling, a novel approach to embody the inherent nonlinearity exhibited by soft continuum manipulator as well as the design of real-time tunable stiffness control. Semi-empirical approach was used, which combined both theoretical modelling and experimental analysis of data obtained in laboratory to develop the model and the control architecture. Finally, the proposed modelling approach and control architecture were implemented into the prototype of GENTLER. The working prototype was validated in real-time using ex-vivo testing.

Seddaoui A, Saaj C M (2018) H INFINITY CONTROL FOR A CONTROLLED FLOATING ROBOTIC SPACECRAFT, ESA Bulletin International Symposium on Artificial Intelligence, Robotics and Automation in Space (i-SAIRAS)
A robotic spacecraft, that can be used for a variety of
missions in-orbit, is highly challenging to control due to
the dynamic coupling between the arm and the spacecraft
base. In addition to the dynamic coupling, there are internal
and external disturbances that require a robust controller
to be tackled. In this paper, the mission concept of
a chaser controlled floating robot used for the capture of
a target in-orbit is introduced where the dynamical model
of the system is derived with respect to the target frame.
An H? controller is designed for this system to first reduce
the relative range between the chaser and the target
then track the pre-designed trajectory for the robotic
arm. The simulation results are based on a 12 degree of
freedom robotic spacecraft in the presence of internal and
external disturbances
Nanjangud Angadh, Blacker Peter C., Young Alex, Saaj Chakravarthini M., Underwood Craig I., Eckersley Steve, Sweeting Martin, Bianco Paolo (2019) Robotic architectures for the on-orbit assembly of large space telescopes, Proceedings of the Advanced Space Technologies in Robotics and Automation (ASTRA 2019) symposium European Space Agency (ESA)
Space telescopes are our ?eyes in the sky? that enable unprecedented
astronomy missions and also permit Earth
observation integral to science and national security. On
account of the increased spatial resolution, spectral coverage,
and signal-to-noise ratio, there is a constant clamour
for larger aperture telescopes by the science and surveillance
communities. This paper addresses a 25 m modular
telescope operating in the visible wavelengths of the electromagnetic
spectrum; such a telescope located at geostationary
Earth orbit would permit 1 m spatial resolution of
a location on Earth. Specifically, it discusses the requirements
and architectural options for a robotic assembly
system, called Robotic Agent for Space Telescope Assembly
(RASTA). Aspects of a first-order design and initial
laboratory test-bed developments are also presented.