The discoveries of the role of reactive oxygen species (ROS) and Ncf1/NOX2 in autoimmune conditions represent one of the major achievements of Redoxis (Hultqvist et al., 2009; Olofsson et al., 2003). The hypothesis that ROS inducers, operating via NOX2, could have therapeutic potential as anti-inflammatory drugs through mechanisms reducing the activity of inflammatory T-cells and neutrophils opens up a multitude of technological and innovative research challenges alongside commercial drug development (Hultqvist et al., 2014).

The discovery of NOX2-produced ROS as regulators of immunity and the hypothesis that autoimmune diseases can be prevented and treated using activators of the NOX2 complex stem from the finding that the Ncf1 gene encoding the NOX2 organizing subunit p47phox/Ncf1, regulates autoimmune arthritis in animals (Gelderman et al., 2007; Hultqvist et al., 2006; Hultqvist et al., 2004; Pizzolla et al., 2011). The fact that altered levels of ROS influenced the T cell reactivity was first shown in the adoptive T cell transfer model in rat where disease can be transferred by CD4+ T cells to naïve recipients (Holmberg et al., 2006; Olofsson et al., 2003). In humans, RA T cells are deficient in intracellular ROS following cell surface activation (Phillips et al, 2010). In addition, the rescue of NOX2 function in CD68 expressing macrophages on a Ncf1 deficient background resulted in protection from severe arthritis or MS symptoms and also rendered the T cells less auto reactive (Gelderman et al., 2007), however, the molecular immunological mechanism for this is still not known. The suggested mechanism underlying the observed protection against autoimmunity is that ROS influence signalling through the T cell receptor (TcR) (Gelderman et al., 2006; Griffiths, 2005).

The use of NOX2 agonists for treatment of autoimmune conditions is extremely challenging and represents a new field in treatment of inflammatory conditions  (Hultqvist et al., 2009). To identify NOX2 activators, the SME Redoxis has developed cell-based models of NOX2 activation. Further characterisation and development of Redoxis-patented lead NOX2 compounds (Hultqvist et al., 2014) will, in the time-frame of the project, take advantage of knowledge and unique technologies of  ROS analyses (ASTON), thiol oxidation and biomarker identification developed by SURREY, and animal models of chronic immunological disease research from FAU. Thus, we will be able to investigate and describe activation pathways of NOX2 activation and unravel the T cell regulating role of ROS, for joint purposes of academic interest in publication and commercial interest in drug development. 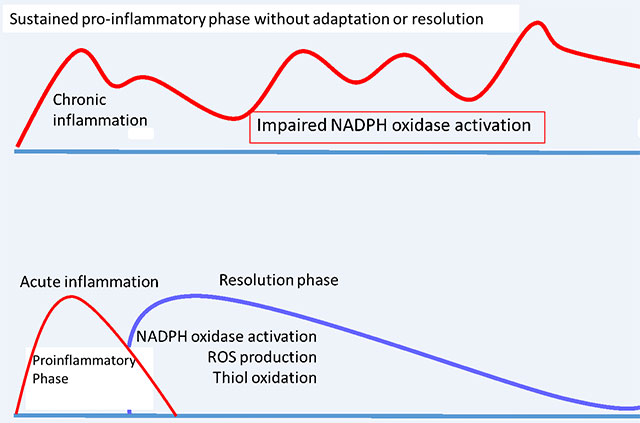