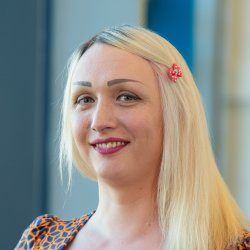 I am a cultural geographer researching more-than-human cultures of scenography, climate crisis, and architecture. My current research focuses on how 'world imaginations' are practiced in an era of climate crisis, which draws upon Global South epistemologies and ideas associated with 'new materialism'. My first monograph entitled Beyond Scenography (Routledge 2019) was shortlisted for the Prague Quadrennial 2019 Best Publication Prize. It presents the first theory of 'scenographics' in relation to the place orientating traits of staged material cultures: from gardening to visual merchandising, installation art to theatre. I have published several chapters and peer-reviewed articles on subjects such as costume politics and architectural performativity. In 2013, I co-founded the research network Critical Costume and co-edited a special issue of Scene (Intellect) on costume practices. My work in the formation of this network was shortlisted for the Theatre and Performance Research Association (TaPRA) Early Career Prize 2017 for 'leadership in costume and practice research'.

In terms of university leadership, I have held the roles of (acting) Associate Dean (2016-2017) and thereafter Deputy Associate Dean (2017 - present) in the founding years of the Surrey's Doctoral College. I am also the Director of Postgraduate Research for the Guildford School of Acting (2016 - present) having previously held the same role for the School of Arts (2015 - 2016). From 2013-2018, I was an Executive Officer for TaPRA after having been co-convenor of the Scenography working group (2010-2013).

Focused on the contemporary Anglophone adoption from the 1960s onwards, Beyond Scenographyexplores the porous state of contemporary theatre-making to argue a critical distinction between scenography (as a crafting of place orientation) and scenographics (that which orientate acts of worlding, of staging). With sections on installation art and gardening as well as marketing and placemaking, this book is an argument for what scenography does: how assemblages of scenographic traits orientate, situate, and shape staged events. Established stage orthodoxies are revisited - including the symbiosis of stage and scene and the aesthetic ideology of 'the scenic' - to propose how scenographics are formative to all staged events. Consequently, one of the conclusions of this book is that there is no theatre practice without scenography, no stages without scenographics. Beyond Scenography offers a manifesto for a renewed theory of scenographic practice.

Critical Costume is an international platform to promote research and practice on the interdisciplinary study of costume. The principal activity of Critical Costume is a biennial conference and exhibition, with the provision for smaller events where appropriate. The purpose of the organization is to support practitioners and researchers to debate the status of costume within contemporary and historical cultures.

At the heart of Critical Costume is the drive to argue the case for costume in an interdisciplinary and multi-faceted research environment. Costume is approached as a varied practice that is inclusive of communities from dance, theatre and performance, film and television, sociology and fashion, as well as museology and anthropology among other disciplinary contexts. Equally, Critical Costume is not exclusively an academic forum. The organization is conceived as a platform for a range of different professions to share approaches to costume, alongside and with researchers from universities.

Contemporary scenography is a crafting of material and technological
stagecrafts that orientates performers and spectators within a staged
atmosphere. The term scenography derives from the Ancient Greek for
skene (?hut or tent?) and the action of graphos (?etching or scribing?).
?Scenography? in English only becomes directly associated with theatre
making in the 1960s. Variants on the original Greek as it pertains to
theatre making are, nevertheless, represented in the majority of
continental European languages: such as scénographie (French) and
scénografie (Czech). All of the continental European variants before the
1960s had a strong association with ?stage design? or ?set design?. The
contemporary English usage, and a number of continental variants, now
exceed a purely physical construction of scenery, to account for how the
material and immaterial qualities of a stage atmosphere are composed
and experienced.

The collaborative practice of scenography as a crafting of stage
atmospheres often exceeds the authorship of a named professional,
such as a designer or director. Accordingly, a scenographer is a
particular kind of theatre maker who sustains a distinct focus on how
the material and technological elements of performance come together
as a felt atmosphere. In this regard, certain directors are also
scenographers, such as Robert Wilson (1941- ) and Robert Lepage (1957-
), along with designers of lighting, sound, set and costume. A
scenographer is typically a lead collaborator, practiced in a number of
stagecrafts that, more often than not, transcend the strict conventional
production hierarchies of author, director, designer and performer.

Hann Rachel (2017) Edward Gordon Craig, Digital Theatre+
Edward Gordon Craig (1872-1966) is known as one of the 20thcentury?s most influential theatre theorists and makers; he was also a trained actor. The broad scope of ?theatre maker?, albeit not a term Craig would have used himself, aptly captures how his ideas on the fusion of ?technical stagecrafts? (conventionally seen as set construction, stage management, lighting and sound) and ?creative stagecrafts? (acting, music, literature, and dance) inform approaches to directing and anticipate collaborative models of authorship. While this relates to the role of a director, the notion of a theatre maker is also inclusive of the collaborative roles and practices of a contemporary scenographer or dramaturg, actor or choreographer. Accordingly, Craig?s practicalexperiments and theoretical arguments positioned the material and spatial elements of theatre as complementary and integral, rather than in service to performers or as superficial decoration. Influenced by the staging principles of Ancient Greek drama, Craig argued that theatre had become too focused on literary texts and needed to rediscover an art of staging that embraced the experiential qualities of light and sound. The ideas that inform contemporary approaches to theatre making are partly in debt to Craig through his argument for a renewed harmony between the individual stagecrafts.
Hann Rachel (2010) Computer-based 3D Visualization for theatre research: Towards an understanding of unrealized Utopian theatre architecture from the 1920s and 1930s,
This research project examines the dramaturgical implications of three historically significant unrealized theatres. The objective was to form new insights on these seldom examined theatres through the process of computer-based 3D visualization. The three case studies draw upon a wide range of source material: including architectural plans, sketches, performance manifestos as well as significant productions and artistic trends that informed 1920s theatre practice.
Hann Rachel, de Guevara Victor Ladron (2015) Addressing practice: introducing a new section for STP, Studies in Theatre and Performance 35 (1) pp. 3-6 Taylor & Francis
DOI: 10.1080/14682761.2015.1006833
This article announces the creation of a new section in STP dedicated to the dissemination of Practice-as-Research (PaR) projects. The authors argue the need for a sustainable archive for PaR outcomes, which embraces a range of media formats and curational strategies.
Hann Rachel (2012) Theatre has Left the Building: Theatre and Performance Architecture in the 21st Century, Australasian Drama Studies (61) pp. 159-161 La Trobe University
Hann Rachel (2015) Practice Matters: Arguments for a ?Second Wave? of Practice Research, Wordpress.com

Dr Rachel Hann, Lecturer in Scenography in the School of Arts at University of Surrey invites your submissions to ?Practice Matters?, an online section of Studies in Theatre & Performance (STP):

My attendance at the Goldsmiths event confirmed two things. Firstly, that I was not alone in wanting to move on from the defensive positions cultivated over the last 20 years. The proposal to focus on the future chimed with my own belief that the argument that ?practice matters? had been won (at least administratively). Secondly, the move away from the micro-politics of practice as/through/based/led was particularly welcome. I am therefore an out and out convert. ?Practice Research? works for me. It focuses on the wider issues related to how researchers share, apply and critique knowledge borne of practice.

Hann Rachel (2011) Hellerau Returned, ERA21 10 (2) pp. 50-51 ERA Média, s. r. o.
Hann Rachel (2018) Beyond Scenography, Routledge
Focused on the Anglophone adoption from the 1960s onwards, Beyond Scenography explores the porous state
of contemporary theatre-making to argue a critical distinction between scenography (as a crafting of place
orientation) and scenographics (that which orientate acts of worlding). With sections on installation art and
gardening as well as marketing and placemaking, this book is an argument for what scenography does: how
assemblages of scenographic traits orientate, situate, and shape staged events. Established stage orthodoxies are
revisited ? including the symbiosis of stage and scene and the aesthetic ideology of ?the scenic? ? to propose how
scenographics are formative to staged atmospheres. Consequently, one of the conclusions of this book is that
there is no theatre practice without scenography, no stages without scenographics. Beyond Scenography offers a
manifesto for a renewed theory of scenographic practice.
Addey Melissa (2020) The garden of perfect brightness & playing in the garden of perfect brightness: historical fiction as a ?playframe.?,
DOI: 10.15126/thesis.00853730
Creative: The Garden of Perfect Brightness
Set in 1700s China, at the court of the Qing dynasty, this historical novel focuses on the life of Giuseppe Castiglione, a painter recruited by the Jesuits to serve in their Mission in Beijing. As Castiglione struggles artistically in an unfamiliar culture, he finds himself drawn to Niuhuru, concubine to a prince and mother to a future emperor, who lives in the Yuan Ming Yuan, the Garden of Perfect Brightness, a country estate. Told in alternate chapters, the novel follows the relationship between the two and the changes made to the Garden. Castiglione is tasked with being the architect who will turn the simple country retreat into an imperial wonderland as Niuhuru sees her home turn into a place she no longer recognises.

Critical: Playing in the Garden of Perfect Brightness
David Harlan asks why reviewers of historical novels ?almost never (venture) beyond the most obvious questions of factual accuracy.? In this thesis I propose that historical fiction can be seen as a ?playframe?, an idea transposed from Jackson and Kidd?s work in heritage performance (e.g. setting a play about slavery within a museum on the topic), where the framework of a historical setting and the playful exploration of a fictional element combine to create what author Hannah Kent calls ?work(s) of possibility,? resulting in strong audience/reader engagement.

I propose the word playframe as a hybrid concept for a hybrid genre. Using the framework of history, the fictional element of the narrative can then be seen as a playful engagement with the past, whereby an author pursues their own concept or vision. Rather than exclusively focusing on factual accuracy, I suggest that we should also pay attention to what an author has chosen to ?play? with, rather than potentially dismissing the fictional element as a historically inaccurate intrusion. I have identified three types of authors and named them the Ventriloquist, the Mosaic-Maker and the Magician, for their different approaches to playing with the past.

Whatever their choice, my argument is the same: in choosing to write or read a novel in this hybrid genre rather than, say, a textbook of history, the experience should be one of playful engagement and exploration rather than exclusively interrogating for accuracy. ?The museum does not have all the answers. The museum plays a potentially far more important role& it has questions,? suggests Bradburne. I would argue that the same is true of historical fiction, and that we should value and explore the fictional element as well as the historical in this hybrid genre.