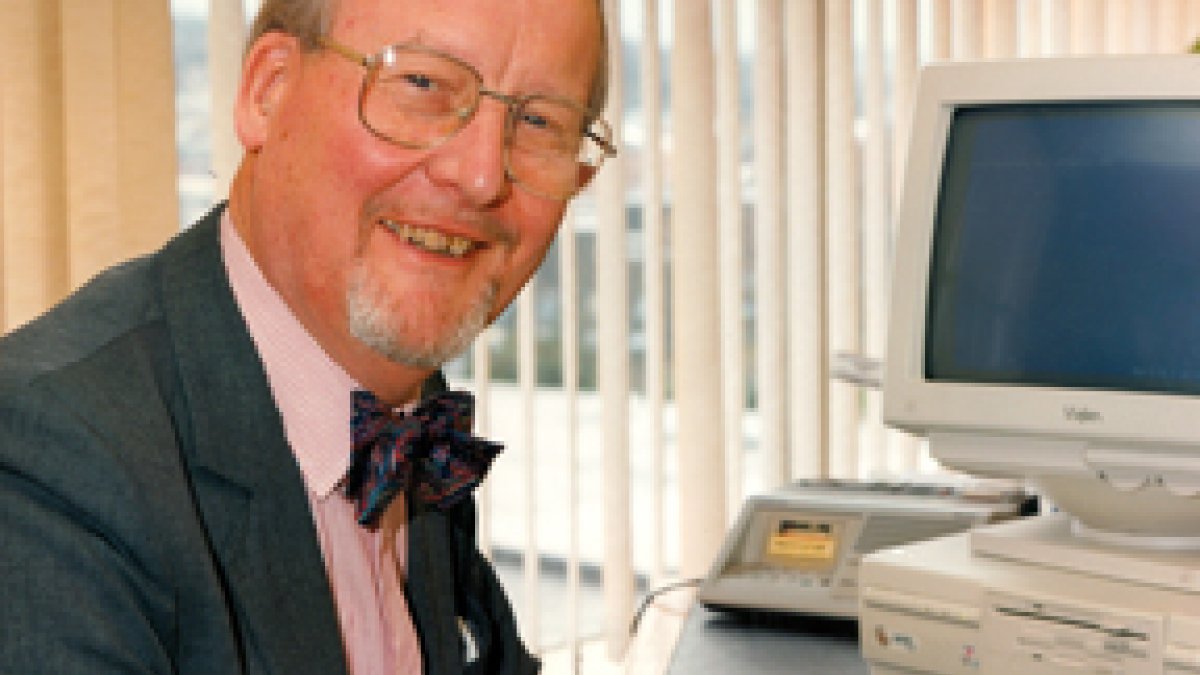 Anthony Kelly (known to his friends as ‘Tony’, but invariably addressed in the University as ‘Vice-Chancellor’ or simply VC) was born in Hillingdon, Middlesex in 1929. By the time he was attracted to Surrey by Lord Robens (then Chancellor of the University) to become the University’s second Vice-Chancellor, he had an international reputation as a scientist with experience in universities, government and industry. Undergraduate study at Reading University, where he obtained two first class honours BSc degrees - General and Special (Physics) - was followed by a PhD at Trinity College Cambridge in 1953. He then worked at the University of Illinois and at Birmingham University before spending three years as an Associate Professor of Metallurgy and Materials Science at Northwestern University, Chicago. He returned to Cambridge in 1959 to take up an appointment as a University Lecturer and as a Founding Fellow of Churchill College where he was Director of Studies in Natural Sciences until 1967. He then moved to a number of roles in government science for eight years, becoming Deputy Director of the National Physical Laboratory in 1969. He received an ScD from the University of Cambridge in 1968 and was elected a Fellow of the Royal Society in 1973 at the age of 43.

During the tenure of Professor Kelly’s vice-chancellorship from 1975-1994, the number of full time students at Surrey increased from 3,000 to 7,000 with a significant increase in the proportion of postgraduate students. During the 1980s, the University developed a large network of associated institutions awarding Surrey degrees (notably the Roehampton Institute and St. Mary’s College Twickenham, both now universities in their own right) and at that time it became one of the foremost validating universities in the country.

Although Surrey’s annual income rose from £6 million to £63 million between 1975 and 1994 – a significant real increase – the 1980s were not an easy time to be a vice-chancellor. In the infamous University Grants Committee (UGC) cuts of 1981, Surrey suffered one of the highest reductions in government funding, in spite of being at the forefront of establishing links between higher education and industry. Professor Kelly responded to the situation with characteristic determination, closing a number of academic departments (rather than spreading the pain evenly which would not have been in the long term interests of the University) and further increasing the University’s income from non-government sources.  At this and other times, conversations in the Vice-Chancellor’s office could be challenging but, as Sir Austin Pearce (then a Pro-Chancellor and a former Chairman of British Aerospace) said many years later, when presenting Anthony Kelly for the degree of DUniv honoris causa “when he digs his heels in he is invariably right”.

A notable feature of the University’s strategy in the 1980s was the development of the Surrey Research Park. Anthony Kelly had first conceived the idea during a sabbatical term in Switzerland in 1979 and a small group (including in particular Jerry Leonard, University Treasurer and Leonard Kail, University Secretary) took the development forward. It was at around the same time that Anthony Kelly became the first Chairman of Surrey Satellite Technology. It is fitting that the building at the entrance to the Research Park which accommodates start-up companies is named the Anthony Kelly Technology Centre.

Surrey was one of the first universities to introduce a staff appraisal scheme in response to the 1985 Jarratt Report on the management of higher education and was also one of the first to draw up a strategic plan, long before all universities were required to do so by the Funding Council. Anthony Kelly was a strong advocate of the Professional Training year which has made a major contribution to Surrey’s consistently high graduate employment record. He had the interests of students at heart and he was meticulous in developing good relationships with the Students’ Union. He was a champion of student sport and could often be found on the Manor Park sports fields on a Saturday afternoon cheering on one of the University’s teams. He encouraged the development of a broader range of subjects in the University – for example the introduction of Dance Studies, a controversial move at the time.

Unusually among vice-chancellors, Professor Kelly continued to make a significant contribution to his own discipline. He was elected to the Fellowship of Engineering (now the Royal Academy of Engineering) in 1979, to the National Academy of Engineering of the USA in 1986 and to the Academia Europaea in 1990. He received many international prizes and awards and honorary doctorates from Birmingham, Reading and Surrey, Hanyan University in South Korea and Navarra University in Spain. He is regarded by many throughout the world as the “father of composite materials” and received the President’s Award of the Royal Academy of Engineering in 2011 in recognition of a lifetime of significant achievement throughout a career spanning more than sixty years. His major book, Strong Solids (first published in 1965, third edition 1986) is still regarded as the seminal work in the field. An international symposium Advanced Materials in the Marketplace (organised by Professor Michael Kelly and Professor Jim Castle) was held at the University in 1994 to mark his retirement. He was Chairman of the Joint Standing Committee on Structural Safety of the Institutions of Civil and Structural Engineering from 1988 to 1998.

At another event held to mark Anthony Kelly’s retirement, HRH The Duke of Kent (Chancellor of the University) commented on his ability, as an experienced yachtsman, to chart a course through choppy waters – an ability which helped to steer the University through a difficult period following the 1981 UGC cuts. At the same event Professor Graeme Davies (Chief Executive of the Higher Education Funding Council for England) proposed a toast to the continued success of the University, concluding: “Professor Kelly has had the vision to set about one of the most difficult tasks in higher education – to change irreversibly the culture of an institution. I believe that during the thirty years since the Robbins report only two of the former colleges of advanced technology have made it into the top grouping of our best international research universities: Surrey and Bath” -  a judgement surely amply borne out in current university league tables.

On his retirement from the University, Tony and his wife Christina (who sadly died in 1997) returned to live in Cambridge. He soon became actively involved as a Fellow of Churchill College (having been elected as an Extraordinary Fellow of the college in 1985) and as an Emeritus Professor and Distinguished Research Fellow in the University’s Department of Materials Science and Technology. He became a well-known and respected figure at Churchill, editing the college’s Review for many years.  He served as President of the Institution of Materials in 1996-97.

Professor Kelly was for a number of years a Vice-President of the Royal National Institute for the Deaf. He was appointed CBE in 1988 and a Surrey DL in 1993. Although from a devout Roman Catholic background, he did not allow his faith to intrude on his role as the head of a secular institution, while nevertheless encouraging the development of an ecumenical approach to the university chaplaincy. He was appointed a Knight of St Gregory in 1992.

Anthony Kelly died peacefully in his sleep at home on 4 June 2014. The University extends its sincere condolences to the members of his family, Marie-Clare, Paul, Andrew and Steve.