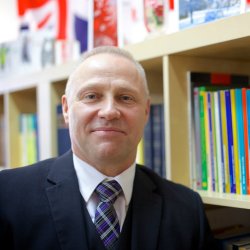 Dr Gary Rivers is the University of Surrey’s (UoS) Dean (Operations) posted at the Surrey International Institute (SII), which is located on the partner campus of Dongbei (north-east) University of Finance and Economics (DUFE) in Dalian city, China. As the senior UoS representative in situ he covers a broad array of management and leadership functions and is the sole foreign member of the SII Senior Management Team and a member of the joint DUFE-UoS Executive Group.

Dr Rivers has extensive transnational education (TNE) experience gained over 25 years of international engagement at various levels and roles and with different institutions. He has taught on degree programmes delivered in Australia, China (Hong Kong and mainland), Kuwait, Malaysia and Singapore. Similarly, he has managed distance education, led several multi-country under- and postgraduate study tours, worked with exchange programmes and negotiated company-sponsored programmes. He has introduced modules into curricula, been a convener, undertaken leadership and management of a TNE programme in a Singapore partnership and Head of Business Programmes in Kuwait that partnered with the University of Tasmania, Australia.

Moreover, Dr Rivers has spent most of his career and TNE time in senior management roles, such as, the Deputy Head of International Programmes at Curtin University of Technology, Australia, and worked with their TNE operations then covering 16 partnerships and 28 programmes, primarily in the Asian region. Later, he specialised in the development of TNE partnerships in China, as the Director of China Projects, and worked with numerous Chinese universities. As part of these endeavours Dr Rivers has engaged with various related TNE agencies such as Australia Education International (AEI), the British Council (BC) and professional services in the areas of law and accounting.

Dr Rivers has participated in several quality and accreditation audits at the senior level conducted by the Quality Assurance Agency UK (QAA), China Academic Degrees and Graduate Education Centre (CDGDC), China Education Association for International Exchange (CEAIE) and Association to Advance Collegiate Schools of Business (AACSB), with reference to the University of Surrey’s TNE engagement.  In all cases, so far, the outcomes have been positive and/or led to accreditation.

Dr Rivers holds a Bachelor of Arts (Social Sciences), Postgraduate Diploma in Business and a Master of Business with Distinction in Human Resource Management from Curtin University of Technology, a Graduate Certificate in Learning and Teaching from the University of Surrey and a Doctor of Philosophy degree (PhD) in Consumer Behaviour from the University of Western Australia – a top 100 ranked university (Rankings of World Universities 2017 and Q&S 2018).

Moreover, he has undertaken a variety of development/interest courses over the years, including certificates in Executive Leadership and Financial Management from Cornell University through eCornell, and individual courses in Managerial Economics from Tuck School of Business at Dartmouth College – Online Bridge Program, Customer Relations Management, Industry Scan and Managing for Shareholder Value at INSEAD Online.

Previously, he held State Councilor roles for both the Australian Human Resource Institute (WA) and the Industrial Relations Society of WA.

Gaur, S., Khan, J., Quazi, A., Rivers, G. and Bhatia, S. (submitted). Role of fellow-feeling and organizational harmony in the relationship between market orientation and performance for logistics firms, Journal of Services Marketing