I graduated from Oxford in Chemistry in 1967 and started my career as a graduate trainee in the National Coal Board - at that time 700,000 people were employed in over 700 coal mines. One of my assignments as a trainee was as Staff Officer to the Chairman - Lord Robens, at the time the first Chancellor of the University of Surrey.

I soon found myself in the industrial relations department - dealing with the National Union of Mineworkers - then arguably the most powerful in the country. From there I moved into the coke manufacturing side of the NCB and soon found myself as Personnel Manager of the Aberaman Phurnacite plant in South Wales.

Next followed two years in HR management consulting for one of the UK's major firms and then 14 years with Schlumberger, the world's biggest oilfield service company. Ten years were spent in Paris as I progressed from Personnel Manager North Sea to Personnel Director of a subsidiary jointly owned by Schlumberger and Dow Chemical. I spent many happy years visiting employees working on rigs in some 80 countries around the world. Back in the UK I became Personnel Director of a merchant bank - which went into administration barely a year later!

My last corporate job was Human Resources Director of Thorn EMI, for eight years until the business was demerged into two separate companies - THORN and EMI. Thorn EMI employed 50,000 people and was one of the largest FTSE 100 companies. I stayed with THORN which was then bought by Nomura, a Japanese bank. I was given a “golden goodbye” and started to draw my pension.

Thinking about what to do next, it occurred to me that I would like to do something different from personnel and decided on teaching. I had always been fascinated by Maths, so a new career path began.

In 2001, aged 56, I started my Mathematics BSc at Surrey and had three marvellous years with nothing else to do than study mathematics. I did a PhD with Prof. Stephen Gourley on modelling bovine tuberculosis in badgers and cattle.

Since 2007 I have been a member of the Department Staff as lecturer, tutor and currently Tutor for Employability and Professional Training. 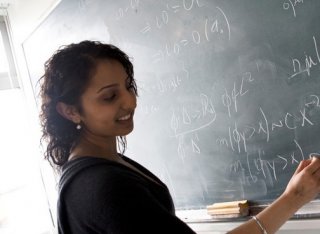