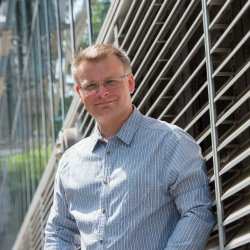 Matt is proud to lead the Digital Media Arts degree, supporting the learning of a diverse cohort of visual content creators. He began his career as a user interface artist, designing animations, icons and visual themes for Xerox and others, though was always keen to move into entertainment design. Teaching himself 3ds Max in his spare time, he eventually joined a London-based games developer as their 2D / 3D artist. In a wide-ranging role, he built and animated 3D characters, designed racing track layouts, contributed to pitches and edited video. Following a time spent freelancing and studying illustration, he began teaching comic book art at Chelsea College of Arts, later joining Brunel University full time to lead the art modules of their Games Design BA. Matt joined Surrey’s Digital Media Arts BA in 2016, to help students tell stories across a range of screen media. In 2018 he was delighted to receive the student-led SHOUT teaching award.