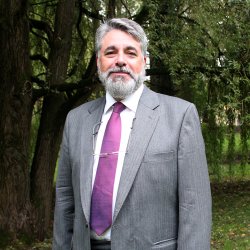 Alan began his academic career as a physicist. However, he developed an interest in computing early on through signal processing for gamma ray burst detectors, and so switched to engineering after being an undergraduate at the Department of Physics & Astronomy. His post graduate research at the Institute of Sound and Vibration Research (ISVR), University of Southampton, was in adaptive filtering, and novel methods of recovering corrupted signals. Alan also worked on novel methods of noise cancellation, both passive and active.

After leaving the ISVR Alan worked for the UK government for many years.  He continues to provide advice to governmental organisations such as Europol through the European Centre for Cyber Crime (EC3), as well as private sector organisations as an independent consultant.

Alan has been involved in some of the most significant advances in computer technology which have seen him elected as a Fellow of British Computer Society, Institute of Physics and the Royal Statistical Society.  He is also a Chartered Engineer, Chartered IT Practitioner, and a Chartered Physicist.

In addition to his academic and government work, Alan has filled senior management roles in businesses focussed on various aspects of Information Technology (IT). In 2000 Alan was pivotal in the flotation of Charteris plc on the London Stock Exchange. He remained a director until 2008 at which point he began to focus back on his academic interests. Alan continues to be a director of businesses involved in IT.

Although Alan has been at the leading edge of technology development for many years, he is primarily a particularly good communicator. He is known for his ability to communicate complex ideas in a simple, yet passionate manner. He spends an increasing amount of his time on public engagement in STEM. Alan not only publishes in the academic and trade journals but has articles in the national press and comments on TV and radio.

Just a sample of the stories Professor Woodward has contributed to includes:

British Airways breach: How did hackers get in? – BBC

If you say your device is ‘unhackable’, you’re just asking for it – The Register

Is your computer slower than normal? – The Daily Mail

The rise of ‘Deep Fakes’