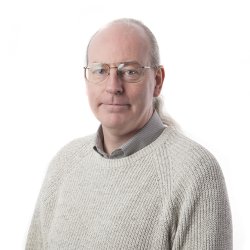 John Doherty is based within the Centre for Aerodynamics & Environmental Flow at the University of Surrey. His research interests cover aerodynamic and multidisciplinary design optimisation, novel air-vehicle conceptual design, propulsion installation aerodynamics and hybrid/electric aircraft and UAS.

John’s research career began within the Aerodynamics Department at RAE Farnborough, where he initially developed novel geometry modelling and CFD approaches for supporting novel aircraft conceptual design. This research extended into development of early 3D CFD design optimisation capabilities, which were subsequently used widely in the aerospace (MOD, BAES, Airbus) and motorsport communities. At DERA and subsequently QinetiQ, he focussed on multidisciplinary integration and optimisation, combined with novel decision support developments and systems engineering approaches. The resulting MDO capabilities played a key role in demonstrating both the feasibility and relevance of multidisciplinary design optimisation for industry. He has worked closely with a wide variety of industrial partners, through UK and international research projects. He moved to the University of Surrey in 2012.

In this thesis I have developed two novel long-term prediction methods that investigate the use of ensembles
of surrogates to perform predictions of aerodynamic data. The models are built using intermediate
computational fluid dynamic convergence data. The first method relies on a gradient based learning
algorithm to optimise the base learners and the second utilises a hybrid multi-objective evolutionary algorithm.
Different selection schemes are investigated to improve the prediction performance and the
accuracy of the ensembles are compared to the converged data, as well as to the delta change between
flow conditions.

Three challenging real world aerodynamic data sets have been used to test the developed algorithms
and insights into aerodynamic performance has been gained through analysis of the computational fluid
dynamic convergence histories. The trends of the design space can be maintained, as well as achieving
suitable overall prediction accuracy. Selecting a subset improves ensemble performance, but no selection
method is superior to any others. The hybrid multi-objective evolutionary algorithm approach is also
tested on two standard time series prediction tasks and the results presented are competitive with others
reported in the literature.

In addition, a novel technique that improves a parameter based surrogates learning through the transfer
of additional information is also investigated to address the lack of data. Transfer learning has an initial
impact on the learning rate of the surrogate, but negative transfer is observed with increasing numbers
of epochs. Using the data available for the low dimensional problems, it is shown that the convergence
prediction results are comparable to those from the parameter based surrogate. Therefore, the convergence
prediction method could be used as a surrogate and form part of an aerodynamic optimisation task.
However, there are a number of open questions that need to be addressed, including what is the best use
of the surrogate during the search?

Kob Lucas L., Doherty John J., Birch David M. (2019) Experimental and Computational Investigation for In-Line Boundary Layer Ingestion, Proceedings of the 2019 AIAA Aviation and Aeronautics Forum and Exposition (2019 AIAA AVIATION Forum) American Institute of Aeronautics and Astronautics (AIAA)
The aerodynamic characteristics of an aft-body, in-line mounted, boundary layer ingesting, electric ducted fan, propulsion installation system has been investigated through experimental and computational analysis. A modular wind-tunnel model allows variation in the geometry of the propulsion installation system to be assessed, in combination with fan speed. Various experimental measurement techniques, including LDA, seven-hole-probe and surface pressures are employed. The propulsion installation system has also been investigated using RANS CFD and comparison with experimental data is presented. An investigation of the boundary conditions for efficiently representing the fan in CFD is described. Initial results show reasonably good agreement between CFD and experiment, in terms of velocity profiles and surface pressures, but highlight remaining differences for cases exhibiting flow separation.
Pembery M., Doherty John, Mower Richard, Jorgens Chris, Hayes-McCoy Declan (2018) Electric Motor Powered Aero-engine Simulator (EMPAS), Proceedings of the 2018 RAeS Applied Aerodynamics Conference, "The Future of Aerodynamics, Research, Development, Simulation & Applications" Royal Aeronautical Society
The potential use of electric motors to power engine simulators on wind tunnel models of commercial aircraft has been studied for some years at the QinetiQ 5m Wind Tunnel at Farnborough. Recently, motors with the required power density have become available, and design and production of a prototype engine simulator is currently being undertaken. The background, potential advantages of the system, design considerations and a progress report on the project is given within this paper.