The spacecraft structure is the physical platform that supports and integrates subsystems and payload and as such it is of fundamental importance for any spacecraft.

The dynamics of the spacecraft structures is of fundamental importance to guarantee the appropriate performance, and similarly the implementation of mechanisms to enable specific functions, ranging from attitude control to deployment of various elements and it is interlinked with the spacecraft structural design.

Our research group is working on projects in collaboration with major aerospace companies in the UK including:

The Spacecraft Structures and Mechanisms group is led by Professor Guglielmo S Aglietti and the details of the various activities described below can be found in his publications.

Micro-vibration produced by the functioning of on board equipment including reaction wheel assemblies, cryo-coolers and pointing mechanisms, and propagating through the spacecraft structure can seriously degrade the performance of accurately targeted payloads. Examples of this include high resolution cameras or telescopes and interferometers.

On this subject the group is a leading centre of expertise in Europe and has carry out projects for ESA and SSTL, contributing to European Cooperation for Space Standardization standards and Surrey Space Centres missions, particularly tackling the following issues:

Details of the work are described in Prof. Aglietti’s publications. 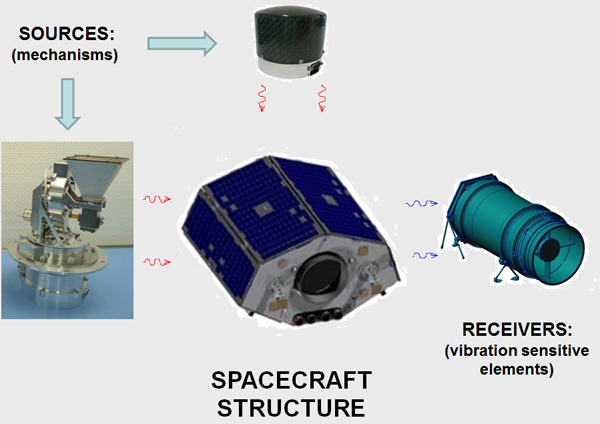 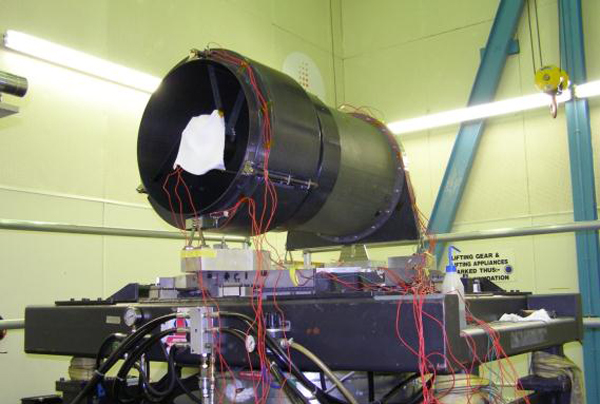 Multi-functional structures are a particular type of structure that integrates other functions such as electrical power storage, in addition to their typical mechanical load bearing function.

The overall aim is to: 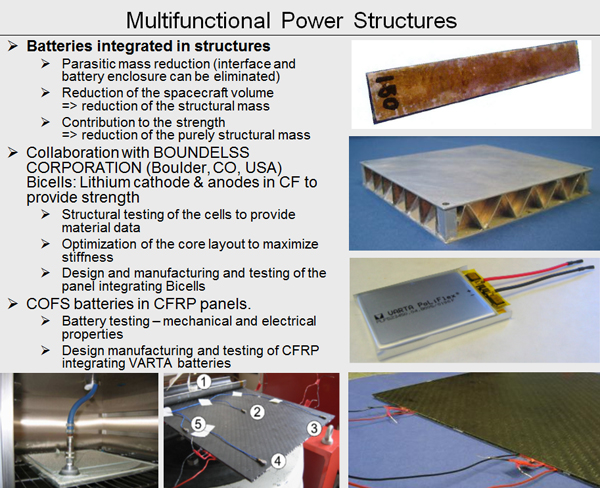 We investigate the mechanical design of electronic hardware, in particular enclosures for Printed Circuit Boards with emphasis on modelling their capability to withstand harsh vibration environments.

We work on modelling the response of packages and appropriate failure criteria to assess the suitability of the design and allow further optimisation (see publications of Amy and Professor Aglietti).

We developed the first mechanical system with SSTL, that has allowed standard computer HDDs to be used onboard satellites. The hardware was successfully flown on the Beijing-1 and has functioned correctly for the whole duration of the mission. 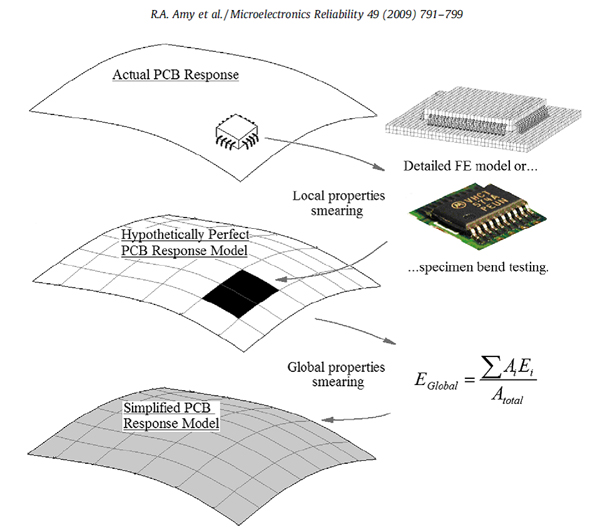 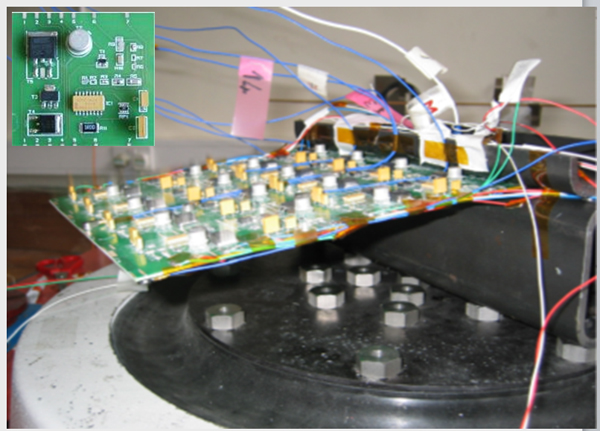 The correlation and validation of finite element models (FEM) against physical test results is particularly important in the space industry because the loads experienced by a satellite during launch can only be accurately predicted by analysing the FEM of the satellite coupled with that of the launch vehicle.

The work focuses on various aspects including:

This work was carried out in support of the Aeolus and BepiColombo spacecraft developed by Airbus for the related ESA missions and the details can be found in the papers of Professor Aglietti, Mercer and Walker. 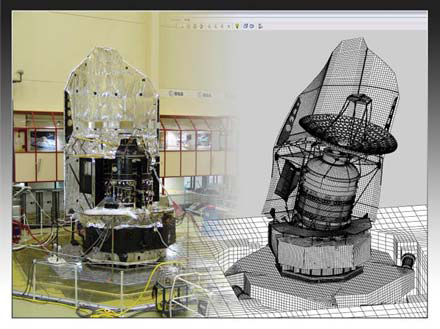 The acoustic excitation spacecrafts are exposed to during launch often results in significant mechanical loads which need to be estimated at the design stage and verified during test campaigns.

Research focus on the development of fast and robust simulation techniques, which utilises boundary element method (BEM) for modelling the acoustic field and finite element method (FEM) for the spacecraft structure include:

Details in the papers of Professor Aglietti and Yotov. 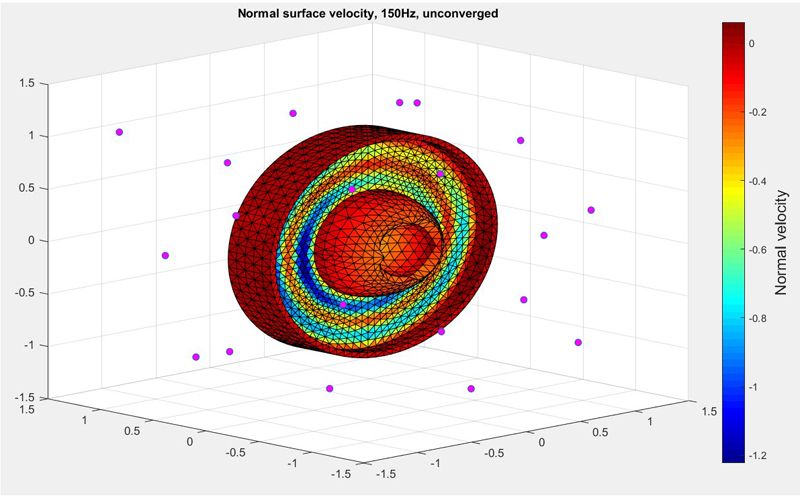 The premise of a universal failure criterion is impractical given the number of adherent-adhesive configurations available. However, for a finite number of joint configurations, design rules can be developed based on experimental test data and detailed FE modelling.

The objective of this project is to develop a novel methodology for verification of adhesive joints typically used on low cost satellite structures. 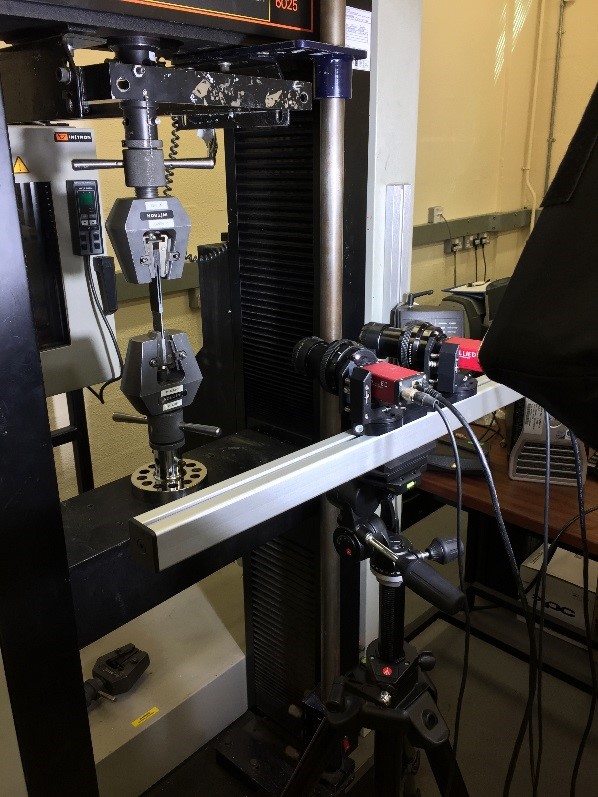 Finite element correlation is based on the comparison between physical test results and computational data, but, especially when dealing with testing of large spacecraft, the test facility is affected by many factors (e.g. dynamic coupling between shaker/slip table and test item or non-perfect control) which may produce discrepancies between numerical analysis and test results.

A virtual testing approach for vibration testing of spacecraft structures is under investigation for improvement of pre-test predictions and post-test correlation activity.

This work is in collaboration with Airbus Defence and Space and ESA, and details are in the paper Remedia and Aglietti. 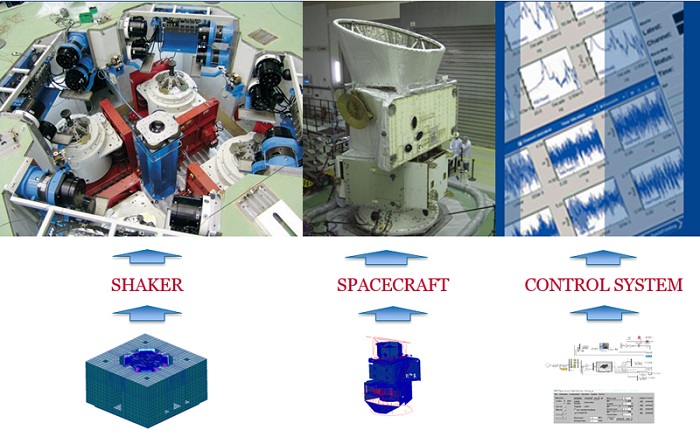 There are several approaches to tackling the issue of on-board micro-vibrations. The main being the use of isolation systems aimed at dynamically decoupling either the sensitive payload or the disturbance source from the satellite structure, was proved to effectively counteract this issue without requiring too expensive, time-consuming design and modification of the satellite bus.

Nevertheless, although isolators have been extensively studied and implemented for the last few decades, their application is far from being ideal due to the several drawbacks that they present, such as limited low-frequency attenuation for passive systems or high-power consumption and reliability issues for active systems.

A novel semi-active isolation system is under development at the Surrey space Centre. This system is capable of combining the advantages of both passive isolators due to the complete elimination of the resonance peak and the response versatility, and active isolators because its linear behaviour is not determined by a control algorithm or large power supply. Thus making this technology a strong candidate for future space missions. 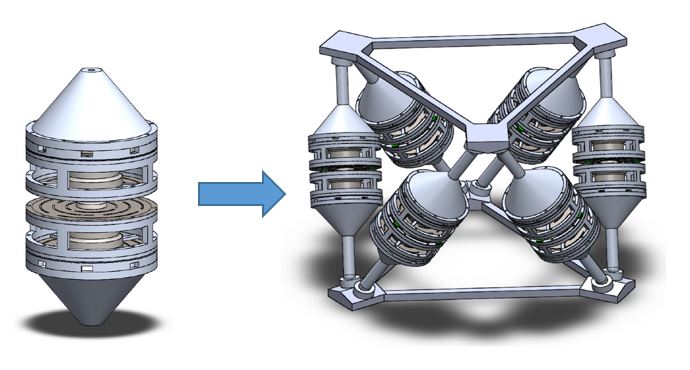