Researchers from the University of Surrey have worked together to prove a 40-year-old hypothesis behind the development of spinal cord disease, syringomyelia. The paper, published in the journal LIFE, is a collaboration between the Centre for Biomedical Engineering Sciences and the School of Veterinary Medicine. 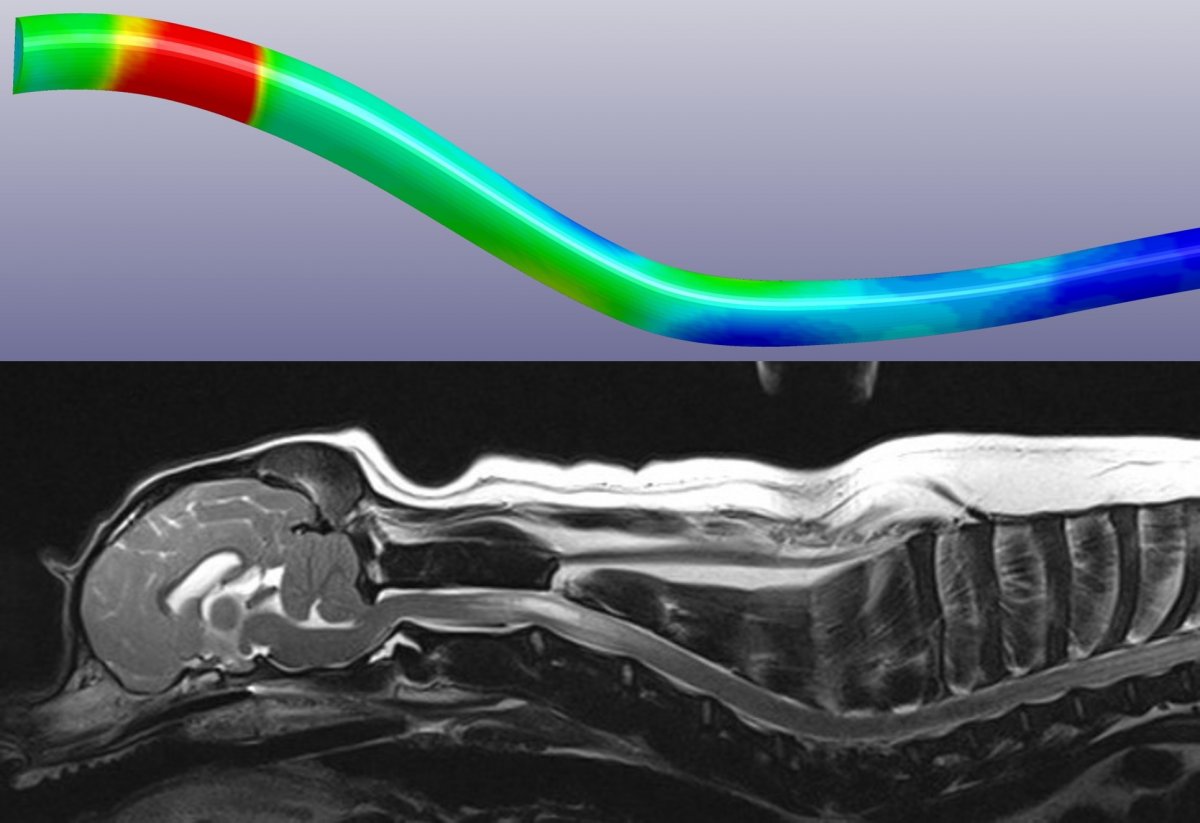 Syringomyelia is a spinal cord disease characterised by fluid-filled cavities within the spinal cord tissue, which was first described over 400 years ago. However, the mechanism by which these cavities are formed is still not fully understood. In 1980, neurosurgeon Bernard Williams hypothesised that pressure changes due to coughing, sneezing, and straining, caused fluid in the cavity to “slosh” thus generating stress in the spinal cord tissue, and allowing the cavity to slowly expand over time.

Syringomyelia is common in brachycephalic (flat-faced) toy breed dogs. In humans, the disease can be painful and disabling, often seen alongside Chiari malformation, a condition where the lower part of the brain pushes down and extends into the spinal canal. In some cases, the malformation can be a direct result of serious spinal cord trauma.

Dr Srdjan Cirovic, Lecturer in Biomedical Engineering and Professor Clare Rusbridge, Professor in Veterinary Neurology have worked together to develop a computer model based on the MRI from a Cavalier King Charles spaniel with syringomyelia, showing that Bernard Williams hypothesis from 1980 is likely correct.

By using this model, the pair used various simulations to show that the fluid “slosh” caused small cavity to gradually expand down the spinal cord. However, when the syrinx became large, there was less focal stress which may explain why syringomyelia can develop rapidly but then remain unchanged in shape over time.

Dr Srdjan Cirovic and Professor Clare Rusbridge plan to further develop the model to improve understanding of why syringomyelia develops in both dogs and humans, and also use it as an opportunity to model potential surgeries in order to better establish means of reversing the syrinx filling in all species.

Clare Rusbridge, Professor in Veterinary Neurology at the University of Surrey said: “The results for the simulations of an expanding syrinx are broadly consistent with the homeostatic hypothesis, however, this study specifically addresses syringomyelia in dogs; more specifically in a Cavalier King Charles Spaniel. Since there are many similarities in syringomyelia in both humans and animals, it is likely the theory should hold for humans too. However, more analysis needs to be done to understand this in further detail.”

Dr Srdjan Cirovic, Lecturer in Biomedical Engineering at the University of Surrey, said: “It has been both fascinating and challenging to work on the problem of syringomyelia over the last decade. With this breakthrough, we are one step closer to understanding this puzzling neurological condition. In the future, we are looking towards using these findings to inform the improved medical treatment of syringomyelia in humans as well as animals.”

Dr Helen Williams, General Practitioner and daughter of Bernard Williams, said: “This is a significant and important piece of work, and thanks to the hard work of two researchers, I am delighted to hear that my late father’s 40-year-old hypothesis is now much closer to being proven. This is key to further understanding more about this debilitating disease and how it can be treated.”

The research paper can be found here.