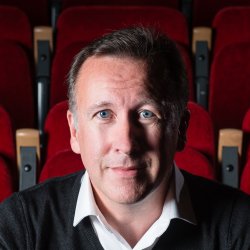 Sean was appointed Head of Guildford School of Acting in 2016 and has led on key initiatives such as restructuring the organisation and developments in the programme portfolio, including the introduction of the MFAs in Acting and Musical Theatre and the MA Theatre (Online & Distance Learning).  He trained at the Guildford School of Acting and was awarded a BA (Hons) Musical Theatre and at The Royal Central School of Speech and Drama, graduating with an MA in Actor Training. Sean is a Fellow of the Royal Society of Arts and of the Higher Education Academy.

Sean is Chair of the UK’s professional body for conservatoire training, The Federation of Drama Schools (FDS) and a founding member of the Alliance of Musical Theatre Conservatoires (AMTC). Committees include, Guildford Borough Council, Guildford First committee, a youth, training and business consortium and, Act for Change, promoting diversity and equality in the creative industries and Wellbeing in the Arts, an industry working group focussing upon mental health and wellbeing.

Internationally, he is the Project Director and member of the Steering Committee for the establishment of the Sharjah Performing Arts Academy (SPAA) in the emirate of Sharjah in the UAE.

Federation of Drama Schools
Chair of the Federation of Drama Schools (FDS). The FDS is the UK's professional body for the conservatoire training sector.
Fellow of Royal Society of Arts
The mission of the RSA (Royal Society for the encouragement of Arts, Manufactures and Commerce) is to enrich society through ideas and action.
Alliance of Musical Theatre Conservatoires
Founding member of the Alliance of Musical Theatre Conservatoires (AMTC). The AMTC is a strategic alliance of the UK's leading musical theatre conservatoires.