The first small molecule inhibitors of the DNA repair enzyme AAG for use as investigational tools and `chemoprotective` drug leads: design, synthesis and bioassay 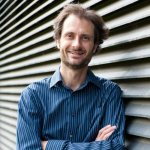 Daniel Whelligan gained a 1st class MSci degree in Natural Sciences from the University of Cambridge (Churchill College) in 2000. After graduation, he spent the summer at Université Bordeaux I, France carrying out organic synthesis in the group of Professor Stephane Quideau. He then moved to the University of Durham for his PhD with Dr Patrick Steel on the use of silenes (Si=C) in novel organic synthetic methods. In 2004, he secured an Alexander von Humboldt Postdoctoral Research Fellowship to work on the use of paracyclophanes in asymmetric catalysis with Professor Carsten Bolm at RWTH Aachen University, Germany. From 2006-7, he took time to travel around the world including a 3 month postdoctoral research placement with Professor Mark von Itzstein at the Institute for Glycomics, Griffith University, Australia. On return to the UK, Daniel worked from 2007-10 at the Institute of Cancer Research (ICR) as a Postdoctoral Training Fellow in Medicinal Chemistry in the group of Dr Swen Hoelder on the discovery of inhibitors of cancer targets. In 2011 he was appointed as Lecturer of Organic/Medicinal Chemistry at the University of Surrey.