Representatives from over 90 companies gathered for the annual Guildford games industry conference hosted by Surrey on 4 July. 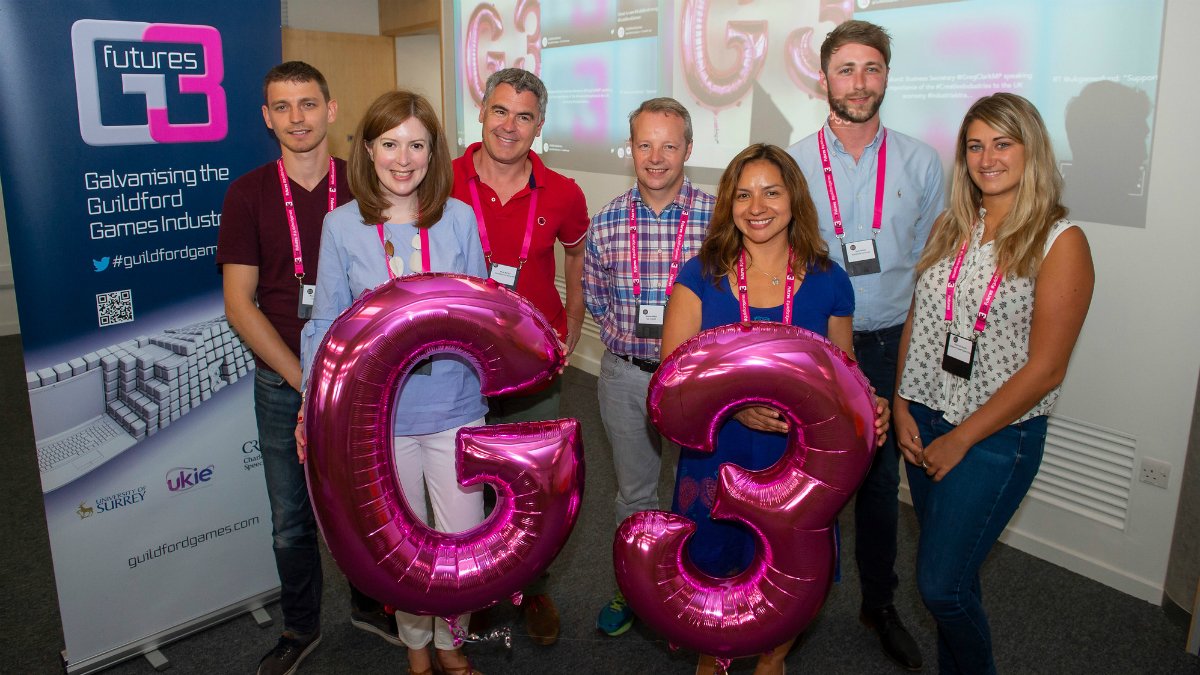 Now in its fourth year, the G3 (Galvanising Guildford Games) Futures conference is aimed at promoting the internationally-renowned Guildford digital games hub and enabling collaboration between games developers and specialists from across the industry. The G3 initiative is led by the University of Surrey’s Centre for Vision Speech and Signal Processing (CVSSP), technology law firm Charles Russell Speechlys and UKIE (the UK industry body for interactive entertainment).

G3 Futures 2018, which took place in Surrey’s 5G Innovation Centre (5GIC), was themed on ‘Games of the Future’ and focused on the impact and potential of immersive VR (virtual reality) and audio. The conference was attended by over 160 delegates representing games developers of all sizes including Electronic Arts (EA), Supermassive Games, Criterion, Figment Productions, Media Molecule and Mojiworks.

Introducing the evening, Professor David Sampson, Vice-Provost for Research & Innovation at the University of Surrey, said: “The fact that Guildford is a major digital games hub of global significance is not known as widely as it should be. I believe a more effective and comprehensive partnership between the sector and the University is a huge opportunity.” Professor Sampson outlined the many ways that Surrey can support the sector, including drawing on expertise within CVSSP, 5GIC and the Departments of Electrical and Electronic Engineering, Computer Science, and Digital Media Arts, to name but a few.

During the conference, keynote speakers Jon Francombe of BBC Research and Development spoke about the importance of immersive audio, and Jonathan Newth of Focal Point VR talked about the evolution and future of immersive VR. Two panel discussions addressed highly topical issues in the games industry: diversity, gender and safety in games; and generating revenue through new business models.

The event also included an exhibition where new technologies and locally developed games were showcased, and ‘fast forwards’ which gave delegates the opportunity to stand up for one minute and promote their studio or topic, or share something of interest with the community.

Professor Adrian Hilton, Director of CVSSP, said: "G3 is growing in strength year-on-year as a voice for the Guildford games industry to raise the profile both nationally and internationally, and strengthen links between the University and industry. We were very pleased that Professor David Sampson, our recently appointed Vice-Provost for Research & Innovation, was able to open the event this year and reinforce the message of University support for G3 engagement with the regional games industry in skills development, research, innovation, and promotion of the sector.”

Nick Hurley, Partner at Charles Russell Speechlys and Co-Chair of G3 Futures, said: “G3 Futures continues to gain momentum and we were delighted to have a record number of attendees this year. Our aim remains to galvanise the Guildford games community, provide a forum for sharing insights and to keep the Guildford games cluster strong on a national and international stage. We organise a number of smaller, more niche events throughout the year to support the local gaming community. However, G3 Futures remains our flagship event and continues to be very well supported.”

Sam Collins, Head of Commercial and Membership at Ukie, said: “Guildford and the surrounding areas are one of the biggest and most established hubs of games activity in the UK. We’ve organised this event with the University of Surrey and Charles Russell Speechlys to support this strong games community. It’s important to the UK economy that Guildford-based games studios are given the support they need to continue to produce great games with global appeal.”

[Discover our programmes in Electrical and Electronic Engineering]