Surrey biochemistry graduate Jane Stewart has created a unique celebration of 150 years of the Periodic Table of Chemical Elements – in the form of a macramé version of one of the most influential achievements in modern science. 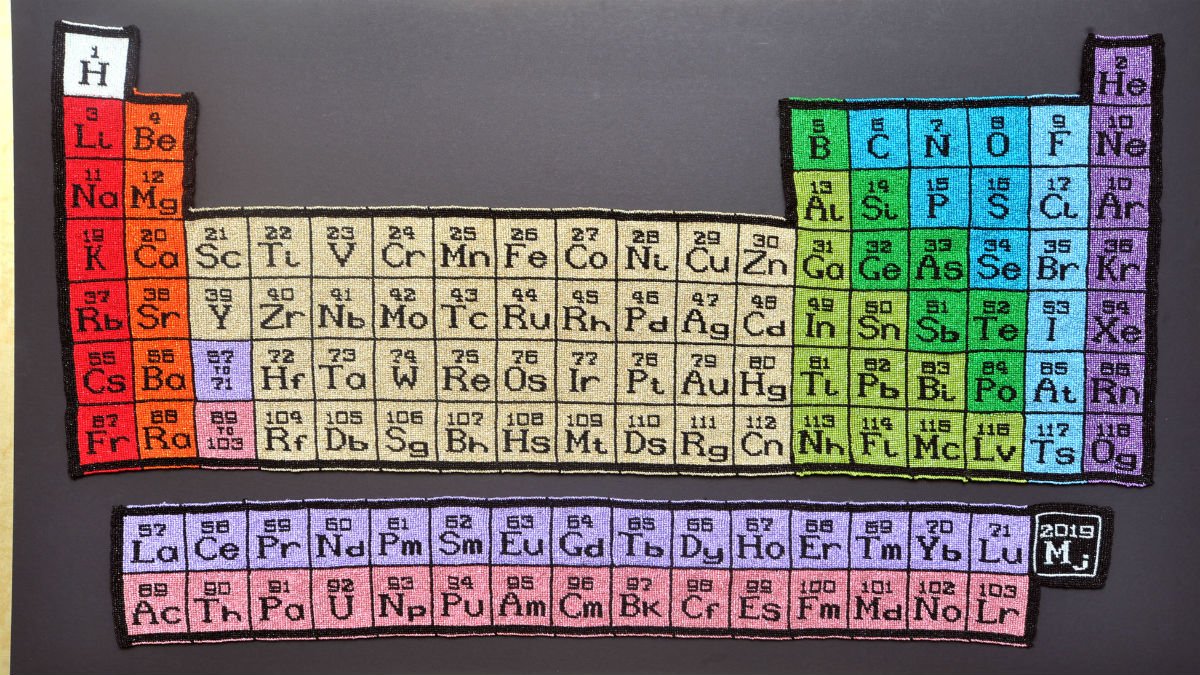 The work of art is set for a starring role in the International Year of the Periodic Table of Chemical Elements (IYPT2019), as designated by UNESCO and marking 150 years since Russian chemist Dmitri Mendeleev devised the iconic chart. But before embarking on travels that will take it to the launch of the celebrations in Paris next month, and then on to a host of events at universities and science festivals around the UK, it was unveiled for the first time at the University of Surrey’s Senate House this Monday, 21 January – where it will hang for a week.

Jane was inspired to take on the project by her father Nevin, a retired industrial chemist, after developing her hobby through the creation of increasingly intricate projects such as a set of Super Mario play blocks for her nephew.

Professor Dulcie Mulholland, Head of the Department of Chemistry at the University of Surrey, said:

“The Periodic Table is one of the most important foundation stones in modern science. It reflects the essence not only of chemistry, but also of physics, biology and other basic sciences disciplines. It is fitting that the periodic table, which maps the fabric of all of the materials that surround us in the natural and human-made world, has been captured in this intricate series of knots. We’re honoured that Jane has allowed the creation to be unveiled at her own University, before heading off on its international travels."

Jane Stewart, the creator of the work and 2007 University of Surrey biochemistry graduate, said:

“Macramé gives a sense of achievement. You get ‘in flow’ while you're working. Being creative keeps you busy and you can share the hobby with others, or work alone.

“It is very soothing, much like knitting. Individual knots don't take much thought. I enjoy designing my own patterns to follow. I'm a scientist by training and the ordered craft form reminds me of lab experiments at university. Method repeat result."

In February the work will be displayed at the Northern Ireland Science Festival, followed by St Catharine’s College, Cambridge in March. In the summer it will feature at York Festival of Ideas and at a Royal Society of Chemistry family day in Aberdeen. In September it will be exhibited at the University of Edinburgh (Nevin’s alma mater) and the University of Warwick. Jane also plans to take it into schools as part of her STEM ambassador role, promoting science to children.