An international team of astronomers has discovered the remnant of an ancient collection of stars that was torn apart by our own galaxy, the Milky Way, more than two billion years ago. 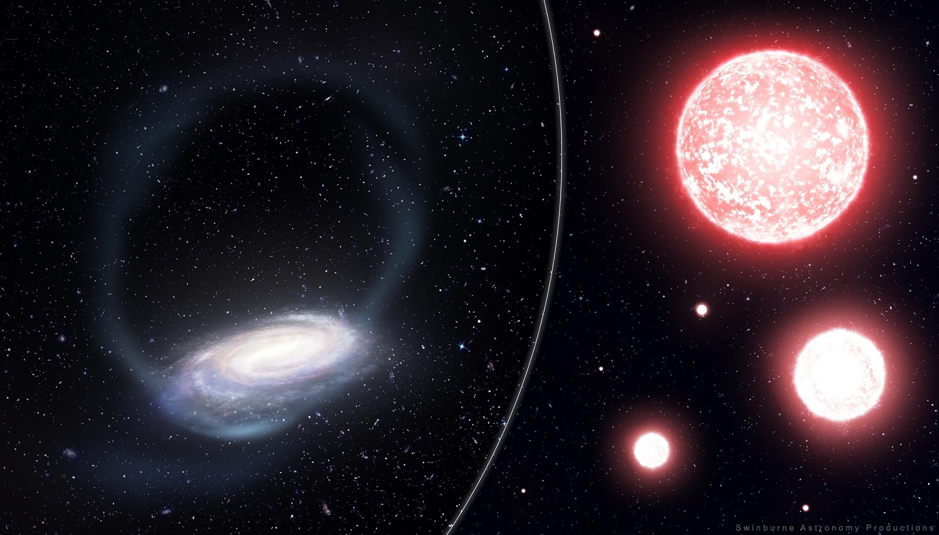 The extraordinary discovery of this shredded ‘globular cluster’ is surprising, as the stars in this galactic archaeological find have much lower quantities of heavier elements than in other such clusters. The evidence strongly suggests the original structure was the last of its kind, a globular cluster whose birth and life were different to those remaining today.

Our Galaxy is home to about 150 globular clusters, each a ball of a million or so stars that orbit in the Galaxy’s tenuous stellar halo. These globular clusters are old and have witnessed the growth of the Milky Way over billions of years.

The study, published in Nature, was led by University of Sydney PhD student, Zhen Wan, and his supervisor, Professor Geraint Lewis, as part of the S5 international collaboration.

Using the Anglo-Australian Telescope in outback New South Wales, this collaboration measured the speeds of a stream of stars in the Phoenix constellation, revealing them to be remnants of a globular cluster that was pulled apart by the gravity of the Milky Way about two billion years ago.

Mr Wan said: “Once we knew which stars belonged to the stream, we measured their abundance of elements heavier than hydrogen and helium; something astronomers refer to as metallicity. We were really surprised to find that the Phoenix Stream has a very low metallicity, making it distinctly different to all of the other globular clusters in the Galaxy.

“Even though the cluster was destroyed billions of years ago, we can still tell it formed in the early Universe from the composition of its stars.”

After the Big Bang, only hydrogen and helium existed in any substantial amount in the Universe. These elements formed the first generation of stars many billions of years ago. It is within these and later stellar generations that heavier elements were formed, such as the calcium, oxygen and phosphorous that in part make up your bones.

Observations of other globular clusters have found that their stars are enriched with heavier elements forged in earlier generations of stars. Current formation theories suggest that this dependence on previous stars means that no globular cluster should be found unenriched and that there is a minimum metallicity ‘floor’ below which no cluster can form.

But the metallicity of the Phoenix Stream progenitor sits well below this minimum, posing a significant problem for our ideas of globular cluster origins.

“This stream comes from a cluster that, by our understanding, shouldn’t have existed,” said co-author Associate Professor Daniel Zucker from Macquarie University.

S5 team leader, Dr Ting Li from Carnegie Observatories, said: “One possible explanation is that the Phoenix Stream represents the last of its kind, the remnant of a population of globular clusters that was born in radically different environments to those we see today.”

While potentially numerous in the past, this population of globular clusters was steadily depleted by the gravitational forces of the Galaxy, which tore them to pieces, absorbing their stars into the main body of the galactic system. This means that the stream is a relatively temporary phenomenon, which will dissipate in time.

“We found the remains of this cluster before it faded forever into the Galaxy’s halo,” Mr Wan said.

As yet, there is no clear explanation for the origins of the Phoenix Stream progenitor cluster and where it sits in the evolution of galaxies remains unclear.

Professor Lewis said: “There is plenty of theoretical work left to do. There are now many new questions for us to explore about how galaxies and globular clusters form, which is incredibly exciting.”

Is the Phoenix Stream unique? “In astronomy, when we find a new kind of object, it suggests that there are more of them out there,” said co-author Dr Jeffrey Simpson from the University of New South Wales. While globular clusters like the progenitor of the Phoenix Stream may no longer exist, their remnants may live on as faint streams.”

S5 modelling coordinator, Denis Erkal from the University of Surrey, said: “The Phoenix stream is likely the tip of the iceberg. As we study more streams with S5 and future surveys, we will hopefully find similar fossils to help us understand the conditions in the early Universe.”