Movement of German Shepherd Dogs is dependent on their shape

New research from the School of Veterinary Medicine at the University of Surrey, has shown for the first time that the movement of German Shepherd Dogs is dependent upon  their shape, particularly their back slope. 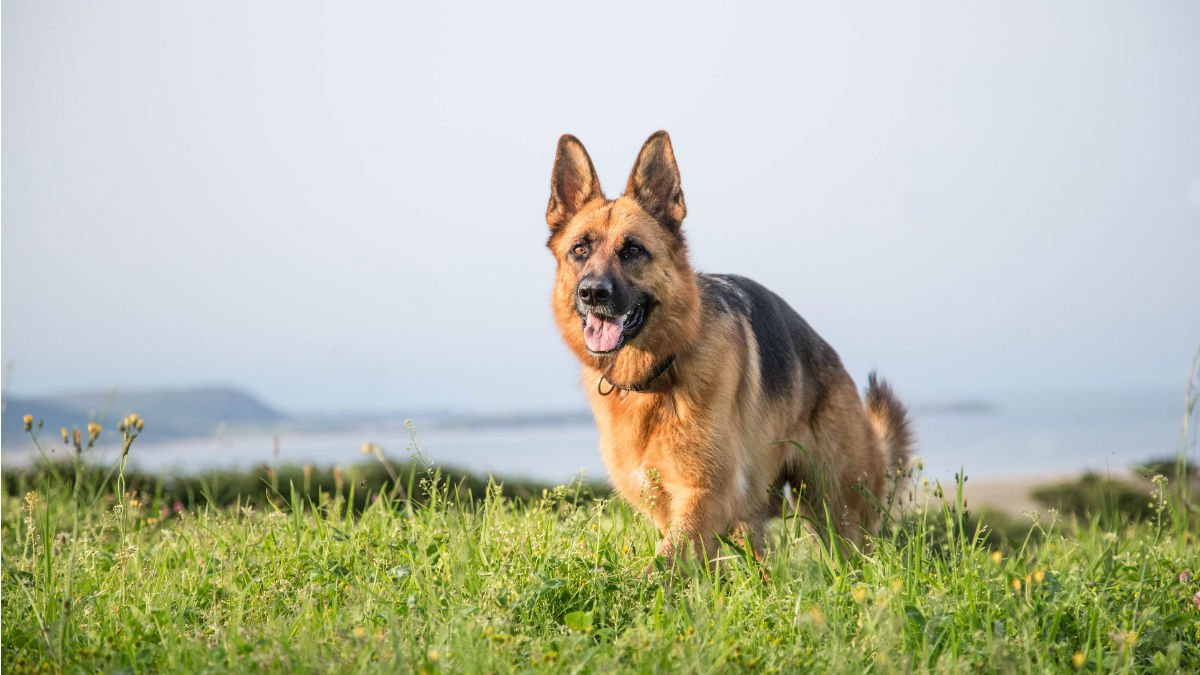 During this unique study, funded by the Kennel Club through the Kennel Club Charitable Trust, researchers examined the body shape of one of the UK’s most popular breeds, the German Shepherd Dog. Commonly observed variations in its body shape include differences in the slope and curvature of the back and the posture of their hind legs.

To evaluate the impact of these variations on the way the animals move and stand, researchers invited 60 German Shepherd Dogs and their owners into the Biomechanics Laboratory at the University of Surrey. They used infrared motion capture cameras and light-reflecting sensors to examine the dogs’ movements, and a high-resolution foot pressure platform to observe foot loading.

Researchers found that the movements of this breed were significantly affected by their body shape. It was found that those with sloped backs support more weight on their forelimbs and place the limbs closer together whilst standing. The study found that unilateral (one-sided) differences in the movement of joints in the back limbs of the dogs, in particular, stifle flexion, hock flexion and hock adduction and external rotation, suggesting greater motion lop-sidedness in dogs with a more sloped back. Externally rotated hocks on any dog are known to be linked to lack of muscle balance in the hindlimbs in dogs with a spread stance. This suggests that maintaining a healthy muscle mass in the hindlimbs can be essential in this breed.

Dr Constanza Gómez Álvarez, former Lecturer in Musculoskeletal Biology at the School of Veterinary Medicine at the University of Surrey, Honorary Senior Lecturer of Brunel University London and a Visiting Research Fellow in the Department of Veterinary Medicine of the University of Cambridge, said: “A common feature of some German Shepherds is a distinct sloping and/or curvature of their spine. It was previously thought such differences were purely aesthetic and had no impact on the animal’s motion but what we have found dispels such notions”.

“Those with a sloping back move differently, and not always in a symmetric way. These results highlight a link between sloping backs and the biomechanics of German Shepherd Dogs that may go some way in explaining the prevalence of clinical conditions in some dogs but not others, like hip and elbow dysplasia. Further investigations resulting from the 200 dogs with signs of musculoskeletal pain will show if there is any correlation between joint pain and shape or not at all.”

Bill King, Chairman of the Kennel Club Charitable Trust which has invested more than £10 million into health research over the past decade, said: “These are the first publications of an important research project which the Kennel Club Charitable Trust commissioned and funded to help clarify understanding of the impact  varying body shapes can have within the German Shepherd Dog breed.

“These studies will help us to plan further investigations and to work in an informed way with breed clubs and other experts to protect the health and welfare of this wonderful breed.”

Dr Aliah Shaheen, Senior Lecturer in Biomechanics in Brunel University London, said: “The state-of-the-art technology and methods that we used in this study allow us to get an objective (unbiased) measure of the posture and movement of these dogs in 3D and the resulting forces experienced by their musculoskeletal system. These methods are also used in other applications in Biomedical Engineering, including the assessment of human gait and movements for clinical and sports performance purposes.”