AVS is an emerging international company specialised in the design, development and production of mechanical, opto-mechanical, thermal and propulsion systems for space and scientific applications. AVS UK, its UK subsidiary, is the most commercial arm of the company for new products for in-space applications, in particular related to propulsion: thrusters, diagnostics, fluidics, power subsystems and thruster pointing mechanisms. 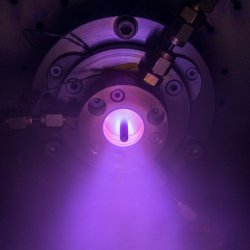 The Surrey Space Centre and AVS UK Ltd are working on the development on novel technologies for advancing the state-of-the-art of space propulsion for satellites applications.

The partnership between Surrey Space Centre an AVS started in 2017 in the form of two UK Space Agency NSTP funded projects aimed at the development of a non-intrusive diagnostic method for plasma propulsion characterisation and a novel Electron Cyclotron Resonance (ECR) plasma thruster for satellites orbit control. Both the projects were successful and paved the way to further opportunities. The outcome of the former has enabled AVS to obtain a new grant from the European Space Agency to investigate the direct application of the new diagnostic technology in a satellite platform for the real-time monitoring of plasma thrusters’ performance. The latter resulted in an extensive performance characterisation of the ECR thruster technology in the facilities of the Surrey Electric Propulsion Laboratory, one of the most equipped in the UK. The promising performance data have underpinned the success in obtaining a new UK Space Agency Flagship grant, the most prestigious of the NSTP programme, to further advance the thruster development and extend its working envelope to unprecedented propellants such as water and ammonia, a first worldwide.

Another AVS-Surrey collaborative project led to development of a thrust balance for measuring the performance of plasma-based satellite propulsion systems. The project had origin in a brainstorming meeting and developed throughout a UK Space Agency grant. The combination of AVS’ mechanical design and precision manufacturing capabilities together with Surrey’s experimental know-how has produced an accurate measurement device that has attracted interest from space propulsion market players. AVS has recently received the first commercial order for a thrust balance from one major space Prime: another success of this fruitful collaboration.