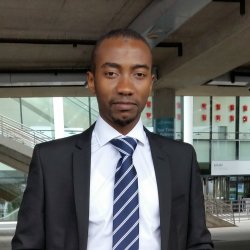 Sani Abubakar Kawuwa, Singh Rao Martand (2018) Response of unsaturated soils to heating of geothermal energy pile,Renewable Energy Elsevier
DOI: 10.1016/j.renene.2018.11.032
Geothermal energy piles (GEPs) are an environmentally friendly heat exchange technology that dualizes the role of structural foundation pile for load support and in meeting the building heating/cooling need. Energy loops made from high-density polyethylene which allow heat carrier fluid circulation, are fitted into the pile foundation elements to extract or inject and store heat energy in the soil surrounding the pile. This paper reports the results of a numerical study investigating the response of an energy pile embedded in unsaturated soils (sand, silt and clay) to natural thermal recovery, after heat injection process. It was found that the increase in soil saturation, duration of heating operation i.e. intermittent (8 or 16 h heating) or continuous mode, magnitude of the heat injection rates influences the temperature changes in the soil surrounding the pile, consequently impacting on the system performance. Similarly, it was observed that temperature at all location approached initial state in a duration equal to about twice that of the heating time. In addition, it was found that imposing excessive heat flux on the pile results in the drying up of the surrounding soil leading to lower thermal conductivity thus decreasing the overall GEP system performance.
Sani Abubakar Kawuwa (2019) Thermo-hydraulic behaviour of geothermal energy piles in unsaturated soils,
DOI: 10.15126/thesis.00853228
Geothermal energy pile (GEP) system harnesses and exchanges low-grade heat energy between the building and the shallow earth surface, via the circulation of heat carrier fluid (HCF) contained in energy loops fitted into the pile foundation elements, for seasonal heating and cooling purposes. The system relies upon moderately-constant ground temperature at some depth, in comparison to the atmospheric air temperature which greatly varies with season. In summer, air temperature is higher than the ground temperature. So the hot air in buildings can be extracted and transferred into the ground to achieve space cooling. Conversely, in winter, the air temperature is lower than the ground temperature. The heat energy from the ground is transferred to the building, and amplified by the heat pump system, to achieve space heating operation. Several past efforts focused on the behaviour of GEPs installed in dry or fully saturated soils, however, that may not be the true representative of all case scenarios. This is especially important considering that the amount of heat energy to be exchanged between the building and the ground depend on several factors. These include number and location of the installed energy loops within the GEP, thermal conductivity of the concrete pile and the surrounding soil, degree of soil saturation, soil type and soil grain size, duration and magnitude of the thermal load applied, and the spacing between geothermal energy piles when installed in a group etc. Thus, this study utilises numerical and laboratory experimental methods to investigate the performance of GEPs embedded in unsaturated soil in order to understand the factors that influence the efficiency of the system. This study used finite element modelling (FEM) and investigated first, the heat flow behaviour within the GEP and the possibility of thermal interaction between the energy loops installed owing to several factors (number and location of energy loops, thermal conductivity etc.). Second, an innovative laboratory experimental setup was developed to study the thermo-hydraulic behaviour of a GEP in dry, unsaturated and saturated Leighton Buzzard sand. Additionally, the experimental results were numerically simulated to investigate the thermo-hydraulic behaviour of a laboratory scale GEP in unsaturated conditions. Third, FEM was used to investigate the heat and mass transfer due to the cyclic heating and cooling of a GEP embedded in soil having different initial degree of saturation. The soil saturation varied between dry, unsaturated and saturated conditions. Fourth, the response of different soil types (sand, silt and clay) to natural recovery under geothermal energy application was investigated. The study also explored the recovery pattern and how it varies with degree of saturation (i.e. having 0%, 20%, 60% and 100% degree of saturation conditions) for sand, silt and clay soils. Fifth, the long-term behaviour of group of GEPs subjected to heating and cooling cycles was investigated. The duration of the simulations were carried out for 10 years (10 cycles) of continuous heat injection and extraction process. The GEPs were thermally activated by subjecting the piles to 6 months of heating followed by 6 months of cooling in each thermal cycle. Similarly, the effect of thermally activating all the GEPs in the group or selecting specific GEPs, to increase the spacing between the piles, was also investigated. The study presented in this dissertation found out that GEPs offer an economical and sustainable solution of achieving space heating and cooling needs in buildings. Specifically, it was observed that the heat transfer mechanism within the GEP depend on several factors i.e. number, location and configuration of energy loops installed, thermal conductivity of the GEP and soil, specific heat capacity etc. These factors, if effectively accounted for in design, maximises the heat transfer on the GEP unit and consequently enhancing the overall therma