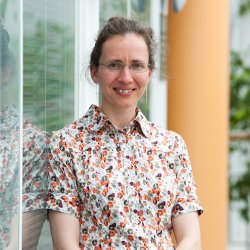 Annika Lohstroh studied for her undergraduate Diploma in Physics in Germany. She developed an interest in nuclear solid state physics during a 6 month exchange programme with the Catholic University Louvain (Belgium). Subsequently, she continued to study this area of physics that uses techniques originating in nuclear physics to investigate semiconductor properties, like hyperfine interaction methods and ion beam analysis. She obtained her PhD at the University of Surrey in 2006, researching charge transport properties in wide band gap semiconductors for radiation detection applications, with a particular emphasis on chemical vapour deposited diamond. She extended these studies as a Research Fellow to a wide range of radiation detector development projects and was appointed as Lecturer in 2008, promoted to Senior Lecturer in 2013.

Her scientific aim is to understand and overcome the limitations of current radiation detector performance.

She lead the team that established the Surrey MSc Physics programme in 2014 and is a member of the Institute of Physics and Engineering in Medicine (IPEM) Course Accreditation Committee.

She lead the newly established departmental Equality and Diversity and Inclusion (EDI) Committee, resulting in the department being awarded Juno Practitioner status by the Institute of Physics (IoP) 2015 and continues to be involved in this work.

In 2017/18, Dr Lohstroh worked as a consultant for the International Atomic Energy Agency (IAEA). In summer 2019, she left the academic staff of Surrey University to pursue a new opportunity at The Open University. 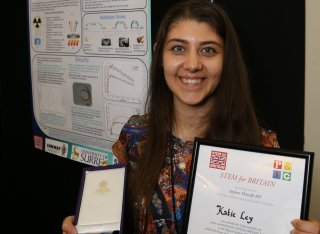 Research and development of sensors for ionising radiation, in particular

The work is carried out collaboratively with a number of industrial partners, often supported by joint supervision of research students. Examples are the Rutherford Appleton Laboratory, the International Atomic Energy Agency, Culham Centre for Fusion Energy as well as industrial Partners.

Doctoral students that have completed their theses: