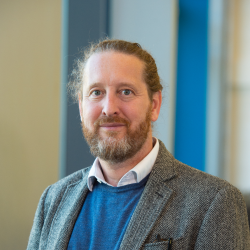 Carl joined Surrey in September 2017, having previously been at St Mary's University, Twickenham. Prior to that (2003-2016) Carl was Reader in English Literature and Travel Culture at Nottingham Trent University, and from 2000-2003 Junior Research Fellow in English at Trinity College, Oxford.

Carl completed his DPhil at Oxford University in 2001. This became the basis of his first book, The Suffering Traveller and the Romantic Imagination (Oxford University Press, 2007). Since then he has published extensively across a range of research areas. He is the author of Travel Writing (2011) in Routledge's New Critical Idiom series, and more recently edited The Routledge Companion to Travel Writing (2016). His main research focus in recent years has been on women travel writers in the 18th and 19th centuries. He has just completed a scholarly edition of Jemima Kindersley's Letters from Teneriffe, Brazil, the Cape of Good Hope and the East Indies (1777) and Maria Graham's Journal of a Residence in India (1812) for the Chawton House Library / Taylor and Francis series Women's Travel Writings in India and is currently completing a monograph on Maria Graham (1785-1842) for Oxford University Press.

Carl also maintains an interest in maritime culture and the literary depiction of the sea in this period, with a particular focus on representations of shipwreck. His principal publications in this area have been two edited collections, one of primary materials - Romantic-Era Shipwreck Narratives: An Anthology (Trent Editions, 2007) - and one of critical reflections - Shipwreck in Art and Literature: Images and Interpretations from Antiquity to the Present Day (Routledge, 2013).

Carl welcomes enquiries from potential doctoral students or research collaborators in all these areas.