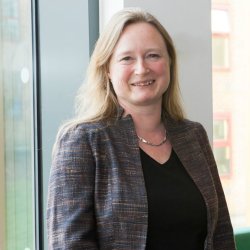 Christine Hine is a sociologist of science and technology who has a particular focus on the role played by new technologies in the knowledge construction process. She has a major interest in the development of ethnography in technical settings and in "virtual methods" (the use of the Internet in social research). In particular, she has developed mobile and connective approaches to ethnography that combine online and offline social contexts. In common with many scholars in Science and Technology Studies, Christine has a scientific and technical background herself. She studied Botany (BA, Oxon) and Biological Computation (MSc, York) and completed her DPhil in the Biology Department at York before making a transition to Sociology of Science and Technology.

Christine Hine has taken a lead role in promoting discussion of methodologies for sociological understanding of the Internet, publishing widely on qualitative methodologies for study of online cultures in everyday life. Her research is located within sociology of science and technology. She is author of Virtual Ethnography (Sage, 2000); Systematics as Cyberscience (MIT, 2008) and Ethnography for the Internet (Bloomsbury, 2015). Substantively, her research includes ethnographic studies of scientific culture, information technology and knowledge infrastructures. She has also carried out research into digital work and particularly digital volunteering; local online groups and sustainability initiatives; and knowledge construction in online spaces. She was President of the European Association for the Study of Science and Technology, 2004 to 2008.

New smart technologies offer great promise to improve care for people living with long-term conditions such as dementia and to enable them to live in their own homes for longer. Engineers work with healthcare professionals, patients and carers to develop technologies to monitor wellbeing and support people to live well at home. Significant ethical challenges arise, however, as decisions are made about what features the technology should contain, who has access to data collected by monitoring devices and what actions should be taken in response. Smart technologies can take decisions on our behalf, and sometimes this can be troubling. In this project, Christine Hine, as a social scientist is working with Prof Payam Barnaghi, an expert in machine learning and Internet of Things who is developing smart technologies for care settings. Together they will explore how ethical challenges arise and are managed in everyday practice.

The research will entail  interviewing engineers, healthcare professionals, carers and patients who are involved in development of smart technologies for care settings. The aim of these interviews is to identify from each participants’ perspective when and how they become aware of ethical challenges, how they distinguish the ethical challenges from other kinds of issue such as a technical hitch or a misunderstanding, and how they deal with the various kinds of issue to negotiate acceptable outcomes. As a result we will learn more about whether ethical issues can be anticipated in
advance and develop ways to build ethical decision-making into the lifespan of a project.

This research is funded by the APEX award scheme.  In partnership with the British Academy, the Royal Academy of Engineering and the Royal Society (‘the Academies’) and with generous support from the Leverhulme Trust, the APEX award (Academies Partnership in Supporting Excellence in Cross-disciplinary research award) scheme offers established independent researchers, with a strong track record in their respective area, an exciting opportunity to pursue genuine interdisciplinary and curiosity-driven research to benefit wider society.

I supervise doctoral students in sociology of science and technology and studies of digital culture. Past students have included:

Enacting Controversy: An Ontological Study of the Development of Computer Encryption. Richard Fletcher

Understanding the use of social networking sites by professional employees in the UK. Acheinu Iseko

IAN KINCHIN Concept mapping and pedagogic health in higher education (a rhizomatic exploration in eight plateaus) University of Surrey
DOI: 10.15126/thesis.900003
This submission presents a portfolio of 50 outputs (3 books, 7 book chapters and 40 journal articles) that were published between 2000 - 2020. This accompanying narrative offers a frame for these outputs to place them in the context of the wider literature and to highlight connections and developments in the underpinning thought processes. Here I exploit the Deleuzian figuration of the rhizome to present the portfolio to emphasise the non linear nature of this body of work and provide a novel conceptual framework for analysis. This corpus emerged from my initial exploration of Novakian concept mapping as a tool to support and document learning. From my early studies that built on the dominant discourse of the field, I examined concept mapping as a study aid. From this my interests diverged into the visualisation of expertise and the implications of variation in the structure of knowledge as depicted by students and as promoted in the curriculum. I started to use concept mapping to explore educational theory and have combined the tool that is strongly linked to its origins in educational psychology (particularly the work of David Ausubel) with other theoretical positions that might inform teaching in higher education. These have included ideas from the sociology of education (particularly the work of Basil Bernstein and Karl Maton); ideas from evolutionary Biology (Stephen Jay Gould’s concept of exaptation); ideas from health sciences (particularly the work on Salutogenesis by Anton Antonovsky), and the post-structuralist ideas of Gilles Deleuze (especially the concept of the rhizome). These ideas offer an opportunity to revise and refresh the assumptions that underpinned Joe Novak’s work on concept mapping – that might increase the level of criticality in continuing research. This work raises questions about the methodological conservatism of the field of concept mapping (and perhaps of higher education research more broadly). The observed methodological and conceptual conservatism of the concept mapping literature is seen as a consequence of its linear (arborescent) development from science education. Through this work, the reader can trace the development of the researcher from his roots in Biological Sciences towards a greater appreciation of post-structuralist perspectives – challenging the conservatism mentioned above.
Jo Smith (2020)Feminist women's experiences of online gendered hate. University of Surrey
DOI: 10.15126/thesis.00852351

This thesis explores feminist women's experiences of online gendered hate: abusive, threatening or upsetting acts or comments which are often sexual, violent, or gendered in content, and which target women in public online spaces. This work draws directly on the experiences of feminist women in England and Wales, using data gathered during focus groups and interviews, and analysed within frameworks offered by feminist and hate crime scholars. The participants were feminist women who had directly received abuse themselves, or had experienced online gendered hate indirectly: through reading about this or seeing other women being targeted.

Accounts given by participants showed the importance of the internet as a space in which they could practice, perform, and develop their feminism. However this was also a world in which women experienced a continuum of abusive acts. Setting this study apart from existing research is the finding that ‘mundane’ behaviours (often treated as trolling) were seen as abusive and harmful by many of the participants. Using these findings, this research develops a model for conceptualising online gendered hate.

Analysis revealed that feminist women's participation in online spaces was disrupted by abusive behaviours. This thesis argues that the ways in which online abuse controls women's participation in the online world is wider than has previously been understood: women did not have to experience abuse directly to be constrained by it. In this, online gendered hate sends a message to all feminist women online about what is (and is not) appropriate performance of difference (Perry, 2001). This research examined how women attempted to fight back and resist online abuse, concluding that no one strategy was successful. Reflection is given to how the findings of this research contribute to contemporary debates on the inclusion of misogyny as a strand of hate crime in England and Wales.

Robert Meadows, Christine Hine, Eleanor Suddaby (2020)Conversational agents and the making of mental health recovery, In: Digital Health6 SAGE Publications
DOI: 10.1177/2055207620966170
Background: Artificial intelligence (AI) is said to be “transforming mental health”. AI-based technologies and technique are now considered to have uses in almost every domain of mental health care: including decision-making, assessment and healthcare management. What remains underexplored is whether/how mental health recovery is situated within these discussions and practices. Method: Taking conversational agents as our point of departure, we explore the ways official online materials explain and make sense of chatbots, their imagined functionality and value for (potential) users. We focus on three chatbots for mental health: Woebot, Wysa and Tess. Findings: “Recovery” is largely missing as an overt focus across materials. However, analysis does reveal themes that speak to the struggles over practice, expertise and evidence that the concept of recovery articulates. We discuss these under the headings “troubled clinical responsibility”, “extended virtue of (technological) self-care” and “altered ontologies and psychopathologies of time”. Conclusions: Ultimately, we argue that alongside more traditional forms of recovery, chatbots may be shaped by, and shaping, an increasingly individualised form of a “personal recovery imperative”.
Nadia Haerizadeh-Yazdi (2020)Parenting a child recipient of proton beam therapy : experience, expertise and recovery. University of Surrey
DOI: 10.15126/thesis.00852303

Proton Beam Therapy (PBT) is a new type of therapy used to treat rare and complex tumours. PBT is claimed to improve patients’ quality-of-life by reducing treatment-related side effects and the risk of long-term complications; although long-term evidence for this is limited. Since 2008, NHS patients have had access to proton treatment through a government funded scheme, although access is restricted to an eligible list of users. Since the start of this scheme, the majority of treated patients have been paediatric patients. This research examines the experiences of parents of paediatric patients, treated with proton therapy. This is the first piece of research to examine users’ experiences involving proton treatment. Proton beam therapy is a new type of treatment and it is not known how users experience, perceive and make decisions involving this treatment.

This is a qualitative inquiry based on joint and single interviews, carried out with 27 parents; eight fathers and 19 mothers. Participants were recruited via an online support group, as well as charities. A total of 21 families participated in this study; two families fell into the category of ‘self-funded’, meaning they opted for proton therapy against the advice of their child’s primary team of doctors and privately raised funds for treatment. The remaining families were sponsored by the NHS. Additionally, discourse analysis of patient information documents related to proton treatment was conducted. Juxtaposing the outcome of the discourse analysis with the accounts presented by parents in their interviews sheds insight into the different perspectives and experiences, if any, and enables us to look at whether and where contrasting views are reflected and reproduced, and the implications these may have.

The way parents view and understand PBT and approach decision-making about this new therapy, and other treatments, are explored in this study. Additionally, this research situates parental knowledge and work, deployed in the management of their child’s illness and treatment, as expertise. Through attaining this expertise parents reclaim some order of control, protect their parental role and responsibility and manage some of their uncertainties. Exploration of these parents’ post-treatment accounts highlights a range of on-going health issues and uncertainties, some specific to PBT, which impede aspects of their child’s recovery. The literature on recovery is primarily focused on an individualistic adult patient perspective, however this research conceptualises recovery from childhood illnesses as a joint venture shared between parent(s) and child. Findings presented in this thesis contribute to the sociology of health and illness, and family studies, by providing insight into the experiences of parents of paediatric patients treated with proton therapy. It also contributes to sociological literature on expertise and recovery.