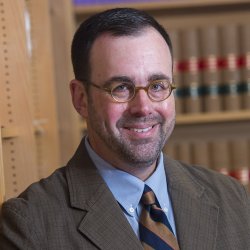 Dr Taggart was a litigation associate at Arnold & Porter LLP in New York City and is admitted to the New Jersey and New York State Bars. He is a Fellow of the Higher Education Academy.

CP Taggart (2013). How Can ‘Positivism’ Account for Legal Adjudicative Duty?, 33 OXFORD J. LEGAL STUD. 169.
View abstract
One aspiration of an analytic jurisprudential theory is to provide an account of how legal obligations arise, including the legal obligation of judges to apply only legally valid norms when adjudicating cases.  Also, any fully adequate theory should enable a solution to a ‘chicken-egg’ puzzle regarding legal authority: legal authority can exist only in virtue of rules that authorize it, but such rules require a legal authority as their source. Which came first?  I argue that it is difficult to see how a particular type of positivist theory can solve the puzzle and also account for the aforementioned adjudicative duty.  The relevant sort of positivist theory is one in which the content of a foundational norm does three things: (i) specifies the ultimate conditions for legal validity; (ii) authorizes certain individuals to create valid legal norms and certain individuals to apply those norms to resolve disputes; and (iii) imposes a legal duty on authorized norm-appliers to apply only norms that are legally valid.  The challenge can be framed in terms of the need to be able to derive a legal ‘ought’ (applying to courts) from only ‘is’-statements expressing social facts, where the requisite derivation cannot rely on what John Searle has called ‘institutional facts’.  Because some of the leading positivist theories are of the relevant sort specified above, if the challenge proves insurmountable, then those positivist theories will turn out to be either false or seriously incomplete.
CP Taggart (2016). The Limits and Significance of Kaplow and Shavell’s Pareto Argument, 99 MARQUETTE L. REV. 661.
View abstract
In a series of articles and a book, Louis Kaplow and Steven Shavell (“KS”) articulated and defended the normative approach of standard law-and-economics.  KS also argued that legal analysts should think in welfare-economic terms exclusively when advising on normative social issues of tremendous import.  This thesis generated controversy within the legal academic community, since it implied that numerous analysts were not doing an important part of their jobs the way that they should be doing it.  One of KS’s main arguments featured a very plausible version of the Pareto principle.  KS claimed that their Pareto argument demonstrated that any method of policy evaluation that gives any weight to principles independently of their effect on how well-off individuals become sometimes commits the evaluator to making everyone worse off.  This article argues that KS misstated what their Pareto argument demonstrated.  It also engages KS’s Pareto argument to reach the result that the Pareto argument provides no independent reason to endorse any part of welfare economics and thus no independent reason to adhere exclusively to welfare-economic thinking.  The article also clarifies much of what is at stake in deciding whether to adopt an exclusively welfare-economic approach to normative legal scholarship.  Finally, the article suggests that KS’s central thesis is incorrect—there is an important place at the table for forms of normative analysis that diverge from a purely welfare-economic approach.
CP Taggart (2016). Retributivism, Agency, and the Voluntary Act Requirement, 36 PACE L. REV. 645.
View abstract
The Voluntary Act Requirement (“VAR”) is the fundamental predicate for imposing legal punishment.  Punishing solely on the basis of evil thoughts or a villainous character is impermissible.  The VAR also embodies the notion that we must not punish someone for conduct over which she lacked sufficient control.  But why not punish someone for conduct that was not within her control?  One answer is retributivist—it would be unjust to do so because that defendant could not have been morally responsible for, and therefore could not deserve punishment for, what she did.  Agent causalism is a contentious view about how criminal defendants  voluntarily act according to which the defendants themselves cause their free, morally responsible actions, as opposed to events or states of affairs involving them, their brains, their circumstances, and so forth.  This article argues that for retributivist justifications of the VAR to be plausible, agent causalism must be true.  Agent causalism might be false, and if it is, then retributivism could not play any role in justifying our fundamental legal precondition for ever imposing any criminal liability upon anyone.  This article does not argue that agent causalism is false, however.  It elaborates and renders plausible an agent causalist position, and it shows how that position could handle types of cases that notoriously pose challenges to the VAR—cases involving complex unconscious conduct, cases involving crimes of omission, and cases involving habitual conduct.
CP Taggart (2019). Retributivism, Ultimate Responsibility, and Agent Causalism, 54 TULSA L. REV. 441.
View abstract
Except for limited forms of omissions liability, Anglo-American criminal law generally requires a criminal defendant, D, to perform a voluntary action before imposing criminal liability.  Further, D must be morally responsible for performing the action for D to deserve punishment for doing it.  So, a puzzle about moral responsibility connected to longstanding debates about determinism and free will, a puzzle that implies that D is never morally responsible for performing any action, must have a moral-responsibility-preserving solution for any form of retributivism to be true.  One compatibilist solution denies that moral responsibility requires what has been termed ‘ultimate responsibility’.  Whether ultimate responsibility is required for moral responsibility is a contested issue.  And, if ultimate responsibility is required for moral responsibility, then the compatibilist solution is unavailable.  This paper argues that, if ultimate responsibility is required for moral responsibility, then, unless both indeterminism and agent causalism are true, any form of retributivism is false.