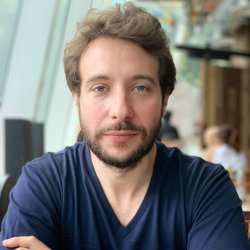 I started working as a lecturer at the university of Surrey in September 2020, after a PhD. in Universite Clermont Auvergne (France) and a postdoc in NTU (Singapore).

My main research interest in the application of AI-related techniques (in particular, constraint programming and machine learning) to assist cryptanalysts. I also work on provable security for cryptographic protocols, in particular in distance bounding.

I am currently co-supervising (with Liqun Chen) the PhD. of Parthi Parthipan.

I am responsible for the COMM046 module (Multimedia security and digital forensics).

Gerault David, Boureanu Ioana (2019)Distance bounding under different assumptions, In: Proceedings of the 12th Conference on Security and Privacy in Wireless and Mobile Networks - WiSec '19pp. 245-248
DOI: 10.1145/3317549.3319729
Distance-bounding protocols were introduced in 1993 as a countermeasure to relay attacks, in which an adversary fraudulently forwards the communication between a verifier and a distant prover. In the more than 40 different protocols that followed, assumptions were taken on the structure of distance-bounding protocols and their threat models. In this paper, we survey works disrupting these assumptions, and discuss the remaining challenges.
Boureanu Ioana, Gerault D, Lafourcade P, Onete C (2017)Breaking and Fixing the HB+DB protocol, In: WiSec '17 - Proceedings of the 10th ACM Conference on Security and Privacy in Wireless and Mobile Networkspp. 241-246
DOI: 10.1145/3098243.3098263
HB+ is a lightweight authentication scheme, which is secure against passive attacks if the Learning Parity with Noise Prob- lem (LPN) is hard. However, HB+ is vulnerable to a key- recovery, man-in-the-middle (MiM) attack dubbed GRS. The HB+DB protocol added a distance-bounding dimension to HB+, and was experimentally proven to resist the GRS attack. We exhibit several security flaws in HB+DB. First, we refine the GRS strategy to induce a different key-recovery MiM attack, not deterred by HB+DB's distance bounding. Second, we prove HB+DB impractical as a secure distance-bounding (DB) protocol, as its DB security-levels scale poorly compared to other DB protocols. Third, we refute that HB+DB's security against passive attackers relies on the hardness of LPN; more-over, (erroneously) requiring such hardness lowers HB+DB's efficiency and security. We also propose a new distance-bounding protocol called BLOG. It retains parts of HB+DB, yet BLOG is provably secure and enjoys better (asymptotical) security.
Lewis James, Gerault David, Boureanu Ioana (2019)"Here and There at Once, with my Mobile Phone!", In: Proceedings of the 16th International Joint Conference on e-Business and Telecommunications2pp. 478-484
DOI: 10.5220/0007953004780484
Whilst proximity-checking mechanisms are on the rise, proximity-based attacks other than relaying have not been studied from a practical viewpoint, not even in academia. Are the simplest proximity-based attacks, namely distance frauds, a practical danger? Can an attacker make it look like they are here and there at the same time? In this paper, we first distinguish “credible” vs. impractical distance frauds, in a quantifiable, formal manner. Second, we implement two “credible” distance frauds on off-the-shelf NFC-enabled Android phones. We present an initial evaluation focused on their feasibility.