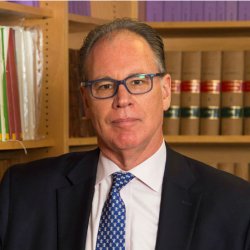 His book The New Global Trading Order (CUP) features a wide-ranging account of the evolution of global trade. He has received grants and fellowships from the American Council of Learned Societies, The Humboldt Stiftung and three Fulbrights. He is a member of the editorial board of the leading journals in legal philosophy.

From 2009 - 2017, he held the Chair in Legal Theory and Legal Philosophy at the European University Institute in Florence.

Sodersten Anna (2016) A Companion to European Union Law and International Law, Wiley-Blackwell
Pardo M, Patterson D (2013) Minds, Brains, and Law: The Conceptual Foundations of Law and Neuroscience, Oxford University Press
Patterson, Dennis M (2018) Neurolaw and Responsibility for Action: Concepts, Courts and Crimes, Cambridge University Press
Patterson D (2016) Criminal law, neuroscience, and voluntary acts,Journal of Law and the Biosciences 3 (2) pp. 355-358 Oxford University Press
DOI: 10.1093/jlb/lsw022
Patterson D (2016) Theoretical Disagreement and Interpretation,Diritto e questioni pubbliche 16 (1) pp. 201-2019 Dipartimento di Giurisprudenza - Università di Palermo
Interpretation is a fundamental feature of legal practice. Yet, we have no complete account of interpretation in
law despite the fact that interpretation has received a great deal of attention in the scholarly literature. This essay proposes a theory of interpretation for law. It presupposes and relies on Hart?s account of the nature of law and some of the fundamental concepts in his account of law.
Patterson, Dennis M (2016) Philosophical Foundations of Law and Neuroscience, Oxford University Press
Patterson D (2016) Transnational Lawmaking,In: Brölmann C, Radi Y (eds.), Research Handbook on the Theory and Practice of International Lawmaking Edward Elgar Publishing Ltd
Patterson Dennis (2016) Can We Please Stop Doing This? By the Way, Postema Was Right,In: Pawel Banas, Dyrda Adam, Gizbert-Studnicki Tomasz (eds.), Metaphilosophy of Law Hart Publishing
While legal philosophy has its own unique set of questions and problems, one activity it shares with many other areas of philosophy is the urge to find the essence of 'law'. Whether expressed as 'essence', 'necessary and sufficient' or 'nature', the enterprise is finding the features of law that set it apart from other normative phenomena.

Many philosophers have abandoned the search for the essential features of many things. The conventional wisdom now seems to be (roughly) that the world divides into natural kinds and other (social or artefactual) kinds.

Legal philosophers have not given up the search for the essence of law. In this way, they are rather different from philosophers in many other areas of the
discipline.

I will then consider Gerald Postema's effort to point to a different way of thinking about law and what legal philosophers ought to be doing when we do jurisprudence. Postema's work is a model of how to do legal theory: it is methodologically sophisticated and it solves problems not otherwise amenable to resolution.

Pardo M, Patterson D (2016) The Promise of Neuroscience for Law: 'Overclaiming' in Jurisprudence, Morality, and Economics,In: Patterson D, Pardo M (eds.), Philosophical Foundations of Law and Neuroscience. Oxford University Press
Claims for the relevance and importance of neuroscience for law are stronger than ever. Notwithstanding persuasive arguments that illustrate a wide degree of 'over­claiming' in the literature, new claims alleging the importance of neuroscience for law are common.1 This chapter discusses three examples of overclaiming how devel­opments in neuroscience can contribute to issues in legal theory. The first example fo­cuses on general jurisprudential theories about the nature of law and legal reasoning. We evaluate arguments concerning how neuroscientific evidence will contribute im­portant insights for jurisprudential debates. The second and third examples concern moral and economic decision making, respectively. We evaluate several arguments about how neuroscientific evidence will illuminate decision making in these domains and how these insights ought to be applied to issues in law and public policy.
Patterson D (2016) Rethinking Duress,Jurisprudence 7 (3) pp. 672-677 Taylor & Francis
DOI: 10.1080/20403313.2016.1237573
John Hyman makes a good case for the proposition that duress defeases what would otherwise be a voluntary act. In this article, I consider Hyman's arguments in the context of economic duress and conclude that while Hyman makes an excellent case for the proposition that duress vitiates voluntariness, there may be cases where the law might not want to allow the defence of duress.
Patterson, Dennis M (2016) Legal Insanity and the Brain: Science, Law and European Courts, Hart Publishing Ltd
Galan A, Patterson D (2013) The limits of normative legal pluralism: Review of Paul Schiff Berman, Global Legal Pluralism: A Jurisprudence of Law beyond Borders,International Journal of Constitutional Law 11 (3) pp. 783-800 Oxford University Press
DOI: 10.1093/icon/mot029
Afilalo A, Patterson D (2012) Statecraft and the Foundations of European Union Law1,In: Dickson J, Eleftheriadis P (eds.), Philosophical Foundations of European Union Law pp. 275-303 Oxford University Press
DOI: 10.1093/acprof:oso/9780199588770.003.0011
This chapter discusses the political and social philosophy of the European Union. It argues that constitutional orders are determined by historical factors encapsulated in the idea of ?statecraft.? It therefore places the European Union into a moment of transition from the ?nation state? to the ?market state.? Events such as the increased harmonization of economic policies, the Single European Act, the European Monetary Union, the creation of European citizenship, and the Schengen arrangements suggest the transition from a nation-state to a ?market-state? constitutional order. The argument moves from internal challenges to external ones and shows how the nature of the state is shaped by its international relations and choices. Ultimately, the European Union is viewed as a unique experiment, but also something that teaches us important lessons about statecraft in general.
Moratti S, Patterson D (2014) Adverse Psychological Effects to Deep Brain Stimulation: Overturning the Question,AJOB Neuroscience 5 (4) pp. 62-64
DOI: 10.1080/21507740.2014.951786
Patterson D (2014) Transnational governance regimes,In: Kammerhofer J, D'Aspremont J (eds.), International Legal Positivism in a Post-Modern World pp. 401-420 Cambridge University Press
DOI: 10.1017/CBO9781139094245.019
Patterson D, Pardo M (2014) Philosophy, Neuroscience and Law: The Conceptual and Empirical, Rule-Following, Interpretation and Knowledge,In: Araszkiewicz M, Bana[ P, Gizbert-Studnicki T, PBeszka K (eds.), Problems of Normativity, Rules and Rule-Following (111) pp. 177-188 Springer, Cham
DOI: 10.1007/978-3-319-09375-8_13
The intersection between law and neuroscience is one of the most-discussed subfields in legal scholarship. In this article, we consider fundamental issues in the field. These include: the distinction between the conceptual and the empirical, rule-following, and the nature of knowledge. We maintain that the conceptual issues are fundamental to all aspects of this enterprise.
Pardo M, Patterson D (2013) Neuroscience, Normativity, and Retributivism,In: Nadelhoffer T (eds.), The Future of Punishment Oxford University Press
We examine two recent challenges to retribution-based justifications for criminal punishment based on neuroscientific evidence. The first seeks to undermine retributivism because of the brain activity of subjects engaged in punishment decisions for retributive (as opposed to consequentialist) reasons. This challenge proceeds by linking retributivism with deontological moral theories and the brain activity correlated with deontological moral judgments. The second challenge seeks to undermine retributivism by exposing, through neuroscientific information, the purportedly implausible foundation on which retributivism depends: one based on free will and folk psychology.

We conclude that neither challenge succeeds. The first challenge fails, in part, because the brain activity of punishers does not provide the appropriate criteria for whether judgments regarding criminal punishment are justified or correct. Moreover, retributivism does not necessarily depend on the success or failure of any particular moral theory. The second challenge fails because neuroscience does not undermine the conceptions of free will or folk psychology on which retributivism depends. Along the way, we point out a number of faulty inferences and problematic assumptions and presuppositions involved in these challenges to retributivism.