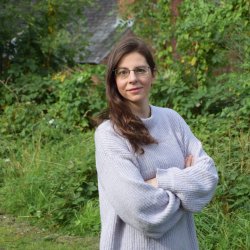 Having studied Archaeology at the Escuela Nacional de Antropología e Historia in México she went on to complete degrees in Near Eastern Archaeology and Book and Digital Media Studies at the University of Leiden in the Netherlands. In 2015 Estefania completed her PhD in Spanish and Latin American Studies at University College London.

Cultural contact between indigenous peoples of Mesoamerica and the mendicant orders during the first decades of the viceroyalty period in Mexico; Indigenous identity and agency; Language contact and dissemination

Estefania’s research focusses on the processes of transculturation between Nahuas and Franciscan missionaries in the Valley of Mexico during the sixteenth century. Her work explores in particular the fundamental role that Flemish Franciscan missionary Fr. Pedro de Gante played in the formation of early Colonial Mexico.

She is interested in exploring the liminal space that was created by the missionaries and Nahuas during the evangelization in which cultural categories were adapted, re-invented, and rejected, sowing the seeds of a new conceptualization of the world that became New Spain.

Yunes Vincke, Estefanía (2020). "Primer for a New World: Fr. Pedro de Gante's Cartilla para enseñar a leer." The Americas, vol. 77 no. 1, p. 129-140.
View abstract View full publication
The  (1569), attributed to Flemish Franciscan Pedro de Gante, was one of the most important primers from the early years of the viceroyalty of New Spain. Nevertheless, the primer's importance during the process of cultural contact has been largely ignored. As did other primers of the period, the  contained the most important prayers, but what sets the  aside is that its selection of prayers is presented in a trilingual version, in Castilian, Latin, and Nahuatl. The content of the Cartilla invites the question as to why Gante, a missionary focused on writing doctrinal works in Nahuatl, would compose a primer that is trilingual, but raises another that is perhaps more perplexing: Why were most of the prayers in Castilian? In this article, I intend to shed a light on Gante's decision to create a complex tool that could be employed by a mixed audience of Castilian, creole, mestizo and Nahua children. By doing this, Gante unwittingly started a process of cultural contact in which language played a pivotal role. The  thus presents itself as a multifaceted tool that helped shaped the culture of the Basin of Mexico during the early years of the viceroyalty.
Cartilla para enseñar a leerCartillaCartillaCartilla
Yunes Vincke, Estefanía (2018). 'La Doctrina christiana en lengua mexicana de fray Pedro de Gante: una herramienta pedagógica para el Nuevo Mundo', Estudios de Historia Novohispana, julio-diciembre, no. 59, p.118-147
View full publication