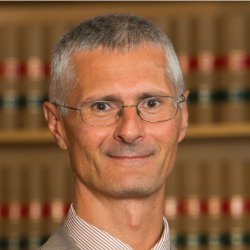 Francesco Giglio is a private lawyer with a focus on Roman law and common law from a theoretical and a doctrinal perspective. He holds degrees from La Sapienza University in Rome (dott giur – 4 year LLB), the University of Freiburg in Breisgau (LLM), the University of Osnabrück (Dr iur), and from Oxford University (MSt, DPhil). Before joining Surrey School of Law, he taught at Cambridge University and then for many years at Manchester University. In 2005, he was Professeur invité at the University of Montpellier I and Humboldt Fellow at the Freie Universität Berlin. In 2010-2014, he was Visiting Full Professor of Private Law at the University of Groningen, The Netherlands.

He has published articles and monographs in English, German and Italian on private international law, the law of obligations and Roman law. His work is characterised by an interest in legal taxonomy and in the influence of history and philosophy on legal reasoning. To further these interests, he founded in 2011 the Groningen Circle, a group of European academics who study the role of extra-systemic values in the development of legal institutions. In his recent research, he has examined the boundaries of the concept of ownership.

A keen rower, Francesco Giglio is not yet ready to acknowledge that his chances of reaching Olympic glory might be quite slim.