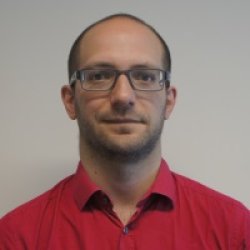 François joined the Department as a Lecturer in Secure Systems in June 2016. Before joining the Department, he was a post-doctoral researcher at the IMDEA Software Institute, working mainly with Gilles Barthe, Pierre-Yves Strub and Benjamin Grégoire (Inria Sophia-Antipolis -- Méditerranée). In 2013, he received a PhD from the Open University for his work on "Proving Cryptographic C Programs Secure with General-Purpose Verification Tools", under the supervision of Andy Gordon, Jan Jürjens and Bashar Nuseibeh. His PhD was supported by a Microsoft Research PhD Scholarship. During the course of his PhD, he worked as a research intern at the European Microsoft Innovation Center (Aachen, Germany), as well as at Microsoft Research in Redmond and Cambridge.

In the past, he briefly worked on abstract interpretation and some aspects of programming and natural languages.

In the past, he briefly worked on abstract interpretation and some aspects of programming and natural languages.

We present a high-assurance and high-speed implementation of the SHA-3 hash function. Our implementation is written in the Jasmin programming language, and is formally verified for functional correctness, provable security and timing attack resistance in the EasyCrypt proof assistant. Our implementation is the first to achieve simultaneously the four desirable properties (efficiency, correctness, provable security, and side-channel protection) for a non-trivial cryptographic primitive.

Concretely, our mechanized proofs show that: 1) the SHA-3 hash function is indifferentiable from a random oracle, and thus is resistant against collision, first and second preimage attacks; 2) the SHA-3 hash function is correctly implemented by a vectorized x86 implementation. Furthermore, the implementation is provably protected against timing attacks in an idealized model of timing leaks. The proofs include new EasyCrypt libraries of independent interest for programmable random oracles and modular indifferentiability proofs.