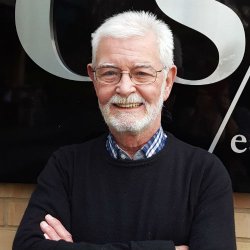 Gerry began his career as an actor in weekly rep at Shanklin Theatre performing in seventeen plays in eighteen weeks and followed this working with repertory companies up and down the country before embarking on a career in musical theatre.  In the West End he appeared in many long running productions such as The Canterbury Tales (Phoenix) Annie (Victoria Palace) Billy (Drury Lane) "Irene" (Adelphi) Strike A Light (Piccadilly) The Wizard of Oz (Victoria Palace) Gypsy (Piccadilly) Mack & Mabel In Concert (Drury Lane) The Wombles (Shaftesbury) and two Royal Variety Performances from The London Palladium. He was Associate Director of the Wolsey Theatre Company, Ipswich for ten years where he directed and choreographed many plays and musicals including the National Tour of Little Shop of Horrors starring Lorraine Chase, the European premiere of the Richard Rodgers musical Two by Two and the first regional production of Martin Sherman’s Bent.

Gerry has had a long association with the Yvonne Arnaud Theatre, Guildford and has directed and choreographed many productions on the main stage and for the last seventeen years has directed their annual pantomime. He was Head of Musical Theatre at GSA (Guildford School of Acting) from 1994 – 2011 and Head of Musical Theatre at PPA (Performance Preparation Academy) 2011 – 2015 and has guest directed at Urdang Academy, Mountview, Guildhall, Italia Conti and is currently external examiner for Royal Conservatoire of Scotland.  Gerry is now the Head of the Foundation Course in Musical Theatre at GSA, University of Surrey.