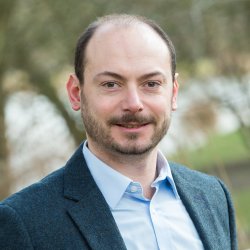 Giuseppe received both his undergraduate degree in Economics and Management of Institutions and Financial Markets (in 2004) and also his Master of Science in Finance (in 2007) from Luigi Bocconi University (Milan, Italy). He has worked in the investment banking industry as a front-office risk management analyst in the Capital Markets division of Lehman Brothers (London) in 2007-08, and then in 2009 he moved on to enrol into a PhD program in Econometrics and Empirical Economics at University of Rome Tor Vergata (second years classes and exams at EIEF in Rome). From October 2012 to December 2017, he has worked as a research fellow in the Health Policy team of the Centre for Health Economics of the University of York. Giuseppe was awarded his PhD in June 2015 from University of Rome Tor Vergata. In December 2017, he has joined the University of Surrey as a Lecturer in Economics.

I am an empirical economist, and my main areas of interest are health economics, labour economics, applied microeconometrics and causal inference. My research is focused on robust data analysis and estimation to provide policy makers the tools to decide which interventions can be beneficial to patients, workers and/or the general public. So far, my works have been published in the Journal of Health Economics, Journal of Economic Behaviour and Organization, Health Economics, Regional Science & Urban Economics, and Social Science and Medicine. In health economics, I have investigated and I am interested in: the determinants of choice of provider of care, and in particular the effect of hospital quality on the choice of provider; the effect of patient choice and competition on healthcare outcomes; the effect of socio-economic status on access to healthcare, in particular waiting times; the effect of waiting times on patient's outcomes (e.g. mortality, readmissions). My research in this area has focused primarily on the English National Health Service case, but its results can be extended to a large part of mixed or Beveridge healthcare systems. In labour economics, I am interested in the effect of education on health, for parents and their children. In causal inference, I am particularly interested in the literature tackling endogeneity bias due to selection or self-selection mechanisms, including bias due to post-treatment selection. Some of the methodologies that I have used in my research include: instrumental variables, difference-in-difference designs, matching, principal stratification, choice models estimation based on revealed preferences, principal stratification, Monte Carlo simulations.

Since July 2019, I am the PI of a 4 year project funded by The Health Foundation to investigate the determinants and effects of hospital workforce retention in the English NHS (https://www.health.org.uk/funding-and-partnerships/programmes/retention-of-the-clinical-and-ambulance-workforce-in-english-nhs-hospitals)

I am currently acting as main supervisor or co-supervisor for three PhD students at the School of Economics.

We examine whether the relaxation of constraints on patient choice of hospital in the English National Health Service in 2006 led to greater changes in mortality for hospitals which faced more rivals before the choice reform. We use patient level data from 2002 to 2010 for three high volume emergency conditions with high mortality risk: acute myocardial infarction (AMI) (288,279 patients), hip fracture (91,005 patients), stroke (214,103 patients). Since mortality risk varies by sub-diagnoses of AMI and stroke we include indicators for sub-diagnoses in the covariates. We also allow for the effect of covariates on mortality to differ before and after the 2006 choice reform. We find that the choice reform reduced mortality risk for hip fracture patients by 0.62% (95% CI: 1.22%, 0.01%), compared with the 2002/3–2010/11 mean of 3.5%, but had statistically insignificant negative effects for AMI and stroke. The reform also had heterogeneous effects across AMI and stroke sub-diagnoses, reducing mortality for 3% of AMI patients and 21% of stroke patients. The reduction in hip fracture mortality was greater for more deprived patients. Policies to increase competition and give patients greater choice are likely to have heterogeneous effects depending on details of patient case mix and market conditions.

We investigate (a) how patient choice of hospital for elective hip replacement is influenced by distance, quality and waiting times, (b) differences in choices between patients in urban and rural locations, (c) the relationship between hospitals' elasticities of demand to quality and the number of local rivals, and how these changed after relaxation of constraints on hospital choice in England in 2006. Using a data set on over 500,000 elective hip replacement patients over the period 2002 to 2013 we find that patients became more likely to travel to a provider with higher quality or lower waiting times, the proportion of patients bypassing their nearest provider increased from 25% to almost 50%, and hospital elasticity of demand with respect to own quality increased. By 2013 average hospital demand elasticity with respect to readmission rates and waiting times were −0.2 and −0.04. Providers facing more rivals had demand that was more elastic with respect to quality and waiting times. Patients from rural areas have smaller disutility from distance.

We investigate the effect on the quality of three high-volume non-emergency treatments of a reform that relaxed restrictions on patient choice of hospital. We employ a quasi difference-indifference strategy and use control functions to allow for time-varying patient selection into providers correlated with unobserved morbidity. After the reform, public hospitals facing more rivals reduced quality, increased waiting times, and reduced length of stay for hip and knee replacements. This is likely due to regulated prices implying larger losses on these treatments compared to coronary artery bypass grafts where no effects were found. Our findings are robust to estimation methods, competition measures, and allowing for entry of private providers. JEL Nos: C26, I11, I18, L22, L33.

Reimbursement of English mental health hospitals is moving away from block contracts and towards activity and outcome‐based payments. Under the new model, patients are categorised into 20 groups with similar levels of need, called clusters, to which prices may be assigned prospectively. Clinicians, who make clustering decisions, have substantial discretion and can, in principle, directly influence the level of reimbursement the hospital receives. This may create incentives for upcoding. Clinicians are supported in their allocation decision by a clinical clustering algorithm, the Mental Health Clustering Tool, which provides an external reference against which clustering behaviour can be benchmarked. The aims of this study are to investigate the degree of mismatch between predicted and actual clustering and to test whether there are systematic differences amongst providers in their clustering behaviour. We use administrative data for all mental health patients in England who were clustered for the first time during the financial year 2014/15 and estimate multinomial multilevel models of over, under, or matching clustering. Results suggest that hospitals vary systematically in their probability of mismatch but this variation is not consistently associated with observed hospital characteristics.

Long waiting times for non-emergency services are a feature of several publicly-funded health systems. A key policy concern is that long waiting times may worsen health outcomes: when patients receive treatment, their health condition may have deteriorated and health gains reduced. This study investigates whether patients in need of coronary bypass with longer waiting times are associated with poorer health outcomes in the English National Health Service over 2000e2010. Exploiting information from the Hospital Episode Statistics (HES), we measure health outcomes with in-hospital mortality and 28-day emergency readmission following discharge. Our results, obtained combining hospital fixed effects and instrumental variable methods, find no evidence of waiting times being associated with higher in-hospital mortality and weak association between waiting times and emergency readmission following a surgery. The results inform the debate on the relative merits of different types of rationing in healthcare systems. They are to some extent supportive of waiting times as an acceptable rationing mechanism, although further research is required to explore whether long waiting times affect other aspects of individuals’ life.

The implications of hospital quality competition depend on what type of quality affects choice of hospital. Previous studies of quality and choice of hospitals have used crude measures of quality such as mortality and readmission rates rather than measures of the health gain from specific treatments. We estimate multinomial logit models of hospital choice by patients undergoing hip replacement surgery in the English NHS to test whether hospital demand responds to quality as measured by detailed patient reports of health before and after hip replacement. We find that a one standard deviation increase in average health gain increases demand by up to 10%. The more traditional measures of hospital quality are less important in determining hospital choice.

Equity of access is a key policy objective in publicly-funded healthcare systems. However, observed inequalities of access by socioeconomic status may result from differences in patients’ choices. Using data on non-emergency coronary revascularisation procedures in the English National Health Service, we found substantive differences in waiting times within public hospitals between patients with different socioeconomic status: up to 35% difference, or 43 days, between the most and least deprived population quintile groups. Using selection models with differential distances as identification variables, we estimated that only up to 12% of these waiting time inequalities can be attributed to patients’ choices of hospital and type of treatment (heart bypass versus stent). Residual inequality, after allowing for choice,was economically significant: patients in the least deprived quintile group benefited from shorter waiting times and the associated health benefits were worth up to £850 per person.

We use the 2006 relaxation of constraints on patient choice of hospital in the English NHS to investigate the effect of hospital competition on dimensions of efficiency including indicators of resource management (admissions per bed, bed occupancy rate, proportion of day cases, cancelled elective operations, proportion of untouched meals) and costs (cleaning services costs, laundry and linen costs, reference cost index for overall and elective activity). We employ a quasi difference-indifference approach and estimate seemingly unrelated regressions and unconditional quantile regressions with data on hospital trusts from 2002/03 to 2010/11. Our findings suggest that increased competition had mixed effects on efficiency. An additional equivalent rival increased admissions per bed and the proportion of day cases by 1.1 and 3.8 percentage points, and reduced the proportion of untouched meals by 3.5 percentage points, but it also increased the number of cancelled elective operations by 2.6%. Unconditional quantile regression results indicate that hospitals with low efficiency, as measured by fewer admissions per bed and a smaller proportion of day cases, are more responsive to competition.

We study patient choice of healthcare provider based on both objective and subjective quality measures in the context of maternal care hospital services in Germany. Objective measures are obtained from publicly reported clinical indicators, while subjective measures are based on satisfaction scores from a large and nationwide patient survey. We merge both quality metrics to detailed hospital discharge records and quantify the additional distance expectant mothers are willing to travel to give birth in maternity clinics with higher reported quality. Our results reveal that patients are on average willing to travel 0.1–2.7 additional kilometers for a one standard deviation increase in quality. Patients respond to both objective and subjective quality measures, suggesting that patient satisfaction scores may constitute important complements to clinical indicators when choosing provider.