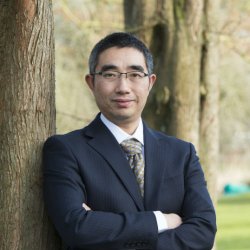 Dr G Tian joined the University of Surrey in June 2015. Prior to this, he was a Lecturer at Sir Joseph Swan Centre for Energy Research, Newcastle University from 2010 to 2015, after serving Birmingham University as a Research Fellow from 2008.He has many years of experience in internal combustion engine research. He has collaborated with a number of industrial partners including Jaguar Land Rover, Cummins, BP, Shell, JCB, Continental and Avid.

I am developing a state-of-the-art engine test bench with an FTIR based emission analyser. The test bench will be capable of conducting any up to 180kW heavy or light duty engine research in the area of alternative fuel, advanced combustion technology, waste heat recovery system or after-treatment system development. The bench can also be used as a platform for engine sub-systems research and development.

A high speed imaging system for spray and combustion research is under development, together with a supercritical injection test rig. For more information please get in touch.

This project aims to use modern engine development technologies to improve vintage Bentley engine performance without losing the original taste of the drivability.

This project is funded by Improved Cost and Efficiency. Our aim in this H2020 project is to understand and optimise the thermal energy management of an hybrid vehicle IC engine

I am interested in taking promising graduate research students in the area of vehicle powertrain system. If you need support in applying for a scholarship for a PhD studentship, including CSC scholarship, please get in touch.

In this paper the spray and combustion characteristics of HVO and its blends are investigated and compared with mineral diesel (European standard). Evidence of the reported reductions in NOx emissions has proven contradictory with some researchers reporting large reductions, whilst others measured no differences.

This paper reports the results from comparison of three different experimental tests methods using diesel/HVO binary fuel blends. The macroscopic spray characteristics have been investigated and quantified using a constant volume spray vessel. Engine performance and exhaust emissions have also been characterised using a HD diesel engine in its original configuration (mineral diesel fuel-ready) and then in a recalibrated configuration optimised for HVO fuel.

The results show that the engine injection control and also the fuel quality can influence the formation of NOx and particulate matter significantly. In-particular a potential pilot injection proved highly influential upon whether NOx emissions were reduced or not. When optimising the fuel injection, a reduction in NOx emissions of up to 18% or reductions of PN of up to 42?66% were achieved with simultaneous savings in fuel consumption of 4.3%.