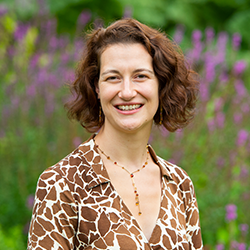 I have 2 main roles within CVSSP, the first is running research projects that are co-ordinated by CVSSP academics – currently that is the two Marie Curie ITN’s MacSeNet and SpaRTaN, with a total of 26 PhD researchers. I am responsible for the day to day management as well as organising the attached training events, summer schools and workshops.

My other role is that of Facilities Manager, co-ordinating the lab facilities within CVSSP and ensuring that the researchers have the equipment and tools they need to do their research. With my technical background combined with project management and event organisation experience I am well equipped to see that the academics and researchers in CVSSP are supported, so that they can continue to produce world leading research and train the next generation of engaged engineers and researchers.

I studied Electronic Engineering with French at the University of Surrey before staying on to do my PhD with Prof Richard Bowden in Sign Language Recognition. A brief 3 years as a post-doc on the EU funded project DictaSign quickly suggested that I was more interested in the work that surrounded research than the research itself; so when my contract ended I transitioned to a new role within CVSSP. At first this role was supported by organising the leading UK conference in machine vision, BMVC, but the long term support for the role was to come from the management of research projects.

British Machine Vision Association (BMVA)
I am part of the BMVA Executive Committee and am responsible for the memberships and meeting organisation.

MacSeNet - Marie Sklodowska-Curie Innovative Training Network
The aim of this Innovative Training Network is to train a new generation of creative, entrepreneurial and innovative early stage researchers (ESRs) in the research area of measurement and estimation of signals using knowledge or data about the underlying structure. With its combination of ideas from machine learning and sensing, we refer to this research topic as “Machine Sensing”. We will train all ESRs in research skills needed to obtain an internationally-recognized PhD; to experience applying their research a non-Academic sector; and to gain transferable skills such as entrepreneurship and communication skills. We will further encourage an open “reproducible research” approach to research, through open publication of research papers, data and software, and foster an entrepreneurial and innovation-oriented attitude through exposure to SME and spin-out Partners in the network. In the research we undertake, we will go beyond the current, and hugely popular, sparse representation and compressed sensing approaches, to develop new signal models and sensing paradigms. These will include those based on new structures, non-linear models, and physical models, while at the same time finding computationally efficient methods to perform this processing. We will develop new robust and efficient Machine Sensing theory and algorithms, together methods for a wide range of signals, including: advanced brain imaging; inverse imaging problems; audio and music signals; and non-traditional signals such as signals on graphs. We will apply these methods to real-world problems, through work with non-Academic partners, and disseminate the results of this research to a wide range of academic and non-academic audiences, including through publications, data, software and public engagement events. MacSeNet is funded under the H2020-MSCA-ITN-2014 call and is part of the Marie Sklodowska-Curie Actions — Innovative Training Networks (ITN) funding scheme
SpaRTaN - Marie Curie Initial Training Network
The SpaRTaN Initial Training Network will train a new generation of interdisciplinary researchers in sparse representations and compressed sensing, contributing to Europe’s leading role in scientific innovation. By bringing together leading academic and industry groups with expertise in sparse representations, compressed sensing, machine learning and optimisation, and with an interest in applications such as hyperspectral imaging, audio signal processing and video analytics, this project will create an interdisciplinary, trans-national and inter-sectorial training network to enhance mobility and training of researchers in this area. SpaRTaN is funded under the FP7-PEOPLE-2013-ITN call and is part of the Marie Curie Actions — Initial Training Networks (ITN) funding scheme: Project number - 607290
DictaSign
DICTA-SIGN was a three-year EU-funded research project that aimed to make online communications more accessible to deaf sign language users. My role was to research SLR technologies, a continuation of the work I did during my PhD. The development of Web 2.0 technologies made the WWW a place where people constantly interact with each other, by posting information (e.g. blogs, discussion forums), modifying and enhancing other people's contributions (e.g. Wikipedia), and sharing information (e.g., Facebook, social news sites). Unfortunately, these technologies are not friendly to sign language users, because they require the use of written language. Can't sign language videos fulfill the same role as written text in these new technologies? In a word, no. Videos have two problems: Firstly, they are not anonymous – anyone making a contribution can be recognised from the video, which holds many people back who otherwise would be eager to contribute. Secondly, people cannot easily edit and add to a video that someone else has produced, so a Wikipedia-like web site in sign language is not possible. DICTA-SIGN's goal was to develop the necessary technologies to make Web 2.0 interactions in sign language possible: Users sign to a webcam using a dictation style. The computer recognises the signed phrases, converts them into an internal representation of sign language, and then has an animated avatar sign them back to the users. Content on the Web is then contributed and disseminated via the signing avatars. Moreover, the internal representation also allows us to develop sign language-to-sign language translation services, analogous to the Google translator. In this way, DICTA-SIGN aimed to solve both of the problems that sign language videos have. The avatar is anonymous, and its uniform signing style guarantees that contributions can be easily altered and expanded upon by any sign language user.