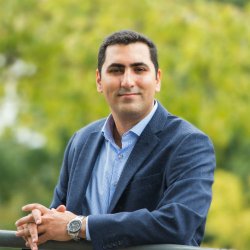 Dr Iman Mohagheghian is a Lecturer (Assistant Professor) in mechanics of materials in the Department of Mechanical Engineering Sciences. Dr Mohagheghian obtained his PhD from University of Cambridge in 2013. His PhD was conducted in Micromechanics research group in Engineering Department and was focused on the application of polymers and polymer nano-composites as lightweight impact energy absorbing materials. After finishing his PhD, he took a research associate position in Department of Mechanical Engineering at Imperial College London. As a member of BIAM-Imperial Centre for material Characterisation, Processing and Modelling, Dr Mohagheghian was working on various types of aeronautical materials including laminated glasses, composite sandwich structures and fibre-metal laminates.

Secondly, the performance of the laminated glass windows made of these chemically strengthened glass plates is evaluated quasi-statically under concentrated and distributed loadings. The effects of polymer interlayer thickness, glass and polymer type and multi-layering the polymer interlayer on the structural performance are investigated. The type and thickness of the polymer interlayer, as well as the type of loading are found to influence the fracture sequence in the glass plates and consequently the post fracture safety of the structure. The response of laminated glass specimens is then assessed under low velocity soft impacts, for velocities up to 3.3 m s?1, using a drop tower facility. Laminated glass with a polyvinyl butyral (PVB) interlayer shows the greatest improvement in terms of peak force and absorbed energy.

Li X, Jiang L, Wang Y, Mohagheghian I, Dear J, Li L, Yan Y (2017) Correlation between K+
-Na+ diffusion coefficient and flexural strength of
chemically tempered aluminosilicate glass,Journal of Non-Crystalline Solids 471 pp. 72-81 Elsevier
DOI: 10.1016/j.jnoncrysol.2017.05.011
The correlation between K
+
-Na+
diffusion coefficient and mechanical
properties of chemically tempered and hybrid tempered (chemically tempered
subsequent to thermally tempered) aluminosilicate glass are investigated. Firstly, the
potassium ion concentration profiles are experimentally measured and the diffusion
coefficient is calculated according to the Boltzmann-Matano approach. Secondly, the
flexure strength and Weibull modulus are determined using a combined experimental
(coaxial double ring) and finite element analysis method. The results indicate that the
flexural strength decreases with the diffusion coefficient of the air side for both types
of glass samples while there is no significant relationship between diffusion
coefficient and Weibull modulus. Diffusion coefficient on air side shows a higher
value than that of the tin side. With the same diffusion coefficient, the flexural strength of chemically tempered glasses are found to be higher than that for hybrid
tempered glasses. The effect of diffusion coefficient on modulus of rupture (MOR) for
hybrid tempered glass is more remarkable. These results would be useful in designing
the strength of glass and guiding the strengthening process by chemical or hybrid
tempering.
Mohagheghian Iman, McShane GJ, Stronge WJ (2015) Impact perforation of monolithic polyethylene plates: Projectile nose shape dependence,International Journal of Impact engineering 80 pp. 162-176 Elsevier
DOI: 10.1016/j.ijimpeng.2015.02.002
Ductile thermoplastics, for example Ultra High Molecular Weight Polyethylene (UHMWPE), are of interest for their impact energy absorbing capabilities. While the impact perforation mechanisms of metallic targets have been investigated in some detail, far less progress has been made towards understanding the impact resistance of ductile polymers. The aim of this investigation is to identify the relationship between the projectile tip geometry and impact energy absorption of semi-crystalline thermoplastics. The focus of the study is light-weight monolithic plates of extruded polymer impacted normally by rigid projectiles at velocities up to 100 ms?1. Three polymers will be considered: Low Density Polyethylene (LDPE), High Density Polyethylene (HDPE) and Ultra High Molecular Weight Polyethylene (UHMWPE). Polyethylene provides a convenient test material, as variations in microstructure provide a contrast in mechanical properties, without significant variations in density. Three distinct projectile nose shapes are considered: blunt, hemi-spherical and conical. For a conical tip, perforation occurs by ductile hole expansion. For this nose shape the high yield strength and strain rate sensitivity of HDPE offers an advantage over the other two polyethylenes. Perforation by blunt and hemi-spherical projectiles is more sensitive to deformation localisation. The high strain hardening of UHMWPE, which increases with strain rate, results in a significantly greater impact resistance than either HDPE or LDPE. The perforation mechanisms and energy absorption of these PE plates are contrasted with those of thin aluminium alloy targets that have the same total mass. UHMWPE outperforms these metallic targets for all three projectile nose shapes. Finally, the influence of target thickness on the impact perforation of LDPE is considered. All three nose shapes show a linear increase in perforation energy with target thickness.
Mohagheghian Iman, Wang Y, Zhou J, Yu L, Guo X, Yan Y, Charalambides MN, Dear JP (2017) Deformation and damage mechanisms of laminated glass windows subjected to high velocity soft impact,International Journal of solids and structures 109 pp. 46-62 Elsevier
DOI: 10.1016/j.ijsolstr.2017.01.006
Bird strike can cause serious risks to the safety of air travel. In this paper, the aim is to improve design by determining deformation and damage mechanisms of laminated glass windows when subjected to high velocity soft impacts. To achieve this, laboratory-scale impact experiments using bird substitute materials were performed in the velocity range of 100?180 m s?1. An important step forward is that high-speed 3D Digital Image Correlation (DIC) has effectively been employed to extract the full-field deformation and strain on the back surface of the specimens during impact. The finite element simulations were performed in Abaqus/explicit using Eulerian approach and were able to represent successfully the experiments.

For the laminated glass structures investigated, the damage inflicted is strongly sensitive to the nose shape of the projectile and most deleterious is a flat-fronted projectile. Two threshold velocities for impact damage have been identified associated with firstly the front-facing and secondly the rear-facing glass layer breaking. The order of the glass layers significantly influences the impact performance. The findings from this research study have led to a deeper and better-quantified understanding of soft impact damage on laminated glass windows and can lead to more effective design of aircraft windshields.

Jiang L, Wang Y, Mohagheghian Iman, Li X, Guo X, Li L, Dear JP, Yan Y (2017) Subcritical crack growth and lifetime prediction of chemically strengthened aluminosilicate glass,Materials and Design 122 pp. 128-135 Elsevier
DOI: 10.1016/j.matdes.2017.03.020
The effect of residual stress on subcritical crack growth in chemically strengthened aluminosilicate glass in air and water was firstly investigated using the double torsion (DT) technique. An experimental evaluation procedure was developed based on the DT method. The research demonstrates that high compressive stress (CS) and low central tension (CT) in chemically strengthened glass are beneficial in improving crack growth index and decreasing susceptibility to fatigue. Chemically strengthened glass with high CS and low CT exhibits a smaller proof-test ratio, which indicates better survival characteristics. The results are useful in designing the strength and optimizing the strengthening process by ion exchange to obtain a more robust glass with long service lifetime.
Mohagheghian I, Yu L, Kaboglu C, Dear J (2017) Impact and Mechanical Evaluation of Composite Sandwich Structures,In: Comprehensive Composite Materials II 8 pp. 239-261 Elsevier
DOI: 10.1016/B978-0-12-803581-8.10055-4
Owing to their high strength and stiffness to mass ratio, composite sandwich structures have increasing been used for various engineering applications especially where mass has a direct influence on operating cost and performance. In sandwich structures, the core has an important role of separating and stabilising the skins as well as transferring shear and compressive stresses between the skins. Therefore, the core properties have a strong influence on the strength and perforation resistance of sandwich structures. In this study, the aim is to investigate the effect of grading the core on the structural as well as impact performance of sandwich panels made of GFRP skins and PVC foam core. Both low and high velocity impacts are considered. High speed 3D digital image correlation is employed to extract full-field displacement and strain contours during impact.

Grading the core is found to result in a more stable failure process under quasi-static loading which can sustain larger deflections before final failure. Under impact loading, grading the core can improve the perforation resistance if a lower density core layer is immediately behind the impacted skin. The efficiency of grading, however, is influenced by the deformability of the impactor.