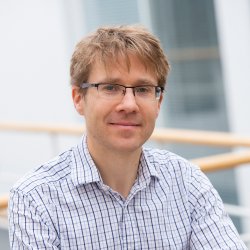 My research interests are focused on the properties of polymer systems, including:

The aim of this project was to investigate the use of LCEs as switchable PSAs using theoretical techniques. The tack energy indifferent liquid crystalline phases, and with various orientations will be calculated to ascertain the tack energy change on switching. The properties of the contact between a rough metal substrate and the adhesive layer will also be modeled.

Colloidal polymer composites, in which polymer particles are blended with a filler, are widely used in applications including pharmaceuticals, crop protection, inks, and protective coatings. It is generally found that the presence of hard particulate fillers will increase the elastic modulus of a polymer colloid composite. However, the influence of the size of the filler particle on the large-strain deformation and fracture and on the viscoelastic characteristics, including creep, is not well explored. We hypothesize that the size ratio of the filler to the colloidal polymer will play a critical role in determining the properties of the composite.

Colloidal composites were prepared by blending soft polymer colloids (as a binder) with calcium carbonate fillers having four different sizes, spanning from 70 nm to 4.5 mm. There is no bonding between the filler and matrix in the composites. The large-strain deformation, linear viscoelasticity, and creep were determined for each filler size for increasing the filler volume fractions (fCC). Weibull statistics were used to analyze the distributions of strains at failure.

We find that the inclusion of nano-fillers leads to brittle fracture at a lower fCC than when mm-size fillers are used. The data interpretation is supported by Weibull analysis. However, for a given fCC, the storage modulus is higher in the rubbery regime, and the creep resistance is higher when nanoparticles are used. Using scanning electron microscopy to support our arguments, we show that the properties of colloidal composites are correlated with their microstructure, which can be altered through control of the filler:polymer particle size ratio. Hard nanoparticles pack efficiently around larger particles to provide reinforcement (manifested as a higher storage modulus and greater creep resistance), but they also introduce weak points that lead to brittleness.

Adams J, Corbett D (2018) Transient shear banding in the nematic dumbbell model of liquid crystalline polymers,Physical Review E97(5)052601pp. 052601-1 - 052601-15 American Physical Society
DOI: 10.1103/PhysRevE.97.052601
In the shear flow of liquid crystalline polymers (LCPs) the nematic director orientation can align with the flow direction for some materials but continuously tumble in others. The nematic dumbbell (ND) model was originally developed to describe the rheology of flow-aligning semiflexible LCPs, and flow-aligning LCPs are the focus in this paper. In the shear flow of monodomain LCPs, it is usually assumed that the spatial distribution of the velocity is uniform. This is in contrast to polymer solutions, where highly nonuniform spatial velocity profiles have been observed in experiments. We analyze the ND model, with an additional gradient term in the constitutive model, using a linear stability analysis. We investigate the separate cases of constant applied shear stress and constant applied shear rate. We find that the ND model has a transient flow instability to the formation of a spatially inhomogeneous flow velocity for certain starting orientations of the director. We calculate the spatially resolved flow profile in both constant applied stress and constant applied shear rate in start up from rest, using a model with one spatial dimension to illustrate the flow behavior of the fluid. For low shear rates flow reversal can be seen as the director realigns with the flow direction, whereas for high shear rates the director reorientation occurs simultaneously across the gap. Experimentally, this inhomogeneous flow is predicted to be observed in flow reversal experiments in LCPs.
Richardson Philip, Martín-Fabiani Ignacio, Shaw Patrick, Alsaffar Eman, Velasquez Emilie, Gardner Paul, Shaw Peter, Adams James Michael, Keddie Joseph L. (2019) Competition between Crystallization and Coalescence during the Film Formation of Poly(Chloroprene) Latex and Effects on Mechanical Properties,Industrial & Engineering Chemistry Research58(46)pp. 21031-21043 American Chemical Society
DOI: 10.1021/acs.iecr.9b02279
Poly(chloroprene) is a synthetic crystallizable polymer used in several applications, including rubber gloves. The film formation of poly(chloroprene) latex offers opportunities to define structures at length scales between the molecular and macroscopic, thereby adjusting the elastomer?s mechanical properties. However, the connections between processing and the resultant film properties are not fully understood. Here, we investigate the competition between the coalescence of latex particles to build cohesive strength and their crystallization to raise the elastic modulus. We demonstrate that when coalescence precedes crystallization, the elastomer has greater extensibility and a higher tensile strength compared to when crystallization occurs during coalescence. The mechanical properties of poly(chloroprene) were tuned by blending two colloids with differing gel contents and crystallizabilities. Heating above poly(chloroprene)?s melting temperature allows increased particle interdiffusion and builds cohesion, prior to recrystallization. We provide evidence from in situ wide-angle X-ray scattering for the strain-induced crystallization of as-cast films from particle blends.