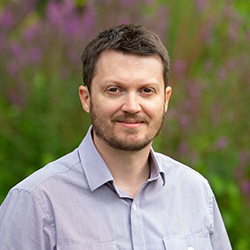 Centre for Vision, Speech and Signal Processing (CVSSP), Department of Electrical and Electronic Engineering, Faculty of Engineering and Physical Sciences.

I am Senior Lecturer in 3D Computer Vision and Postgraduate Research Director within the Centre for Vision, Speech and Signal Processing (CVSSP) at the University of Surrey.

My research centres on scene modelling from multi-view video input, with a focus on complex dynamic scenes. In particular, I’m interested in how to generalise modelling to scenes with complex surface reflectance properties (e.g. glossy materials), and how to extend modelling to uncontrolled outdoor environments. I work in close collaboration with industry to research applications for the creative sector. Examples of applications of my research have included free-viewpoint video, AR, VR and immersive content production.

My research centres on scene modelling from multi-view video input, with a focus on complex dynamic scenes. In particular I am looking at how to generalise modelling to scenes with complex surface reflectance properties (e.g. glossy materials), and how to extend modelling to uncontrolled outdoor environments. I have undertaken many research projects in collaboration with industry to develop applications for the creative sector. Examples of applications of my research include free-viewpoint video, AR, VR and immersive content production.

To date, my area of research has resulted in the introduction of robust methods for outdoor scene modelling from a small number of cameras and novel algorithms for the reconstruction of scenes with arbitrary unknown reflectance properties. Applications have been investigated as part of a stream of collaborative research projects with major companies from the creative industry sector (BBC, Foundry, Double Negative, Framestore, etc). This has the potential to open new applications in other disciplines requiring accurate scene modelling and understanding (e.g. in robotics, healthcare, cultural heritage).

In the future I would like to explore how new acquisition techniques such as lightfield imaging, and deep learning, can be leveraged to remove current constraints, enabling us to model live action scenes ‘in the wild’ from a small number of cameras.

I currently lead and teach the following three modules in the Department of Electrical and Electronic Engineering:

In Computer Algorithms & Architecture, I teach algorithms and data structures in C. The course focuses on how to analyse the complexity of algorithms and how to improve their performance and efficiency.

In the Laboratories, Design & Professional Studies module series, I teach professional studies, with an emphasis on entrepreneurship. As part of these modules, I lead the Enterprise Project which is a year-long project where students work in groups on creating innovative business concepts and pitching them at a Dragon’s Den.

I also supervise undergraduate and MSc projects in the areas of Computer Vision, Computer Graphics and Computational Photography (typically 6 projects per academic year).

Purpose – To determine the concentrations of different gas tamponades in air to achieve 100% fill of the vitreous cavity postoperatively and to examine the influence of eye volume on these concentrations.

Methods – A mathematical model of the mass transfer dynamics of tamponade and blood gases (O2, N2, CO2) when injected into the eye was used. Mass transfer surface areas were calculated from published anatomical data. The model has been calibrated from published volumetric decay and composition results for three gases sulphahexafluoride, SF6, hexafluoroethane, C2F6, or perfluoropropane, C3F8. The concentrations of these gases (in air) required to achieve 100% fill of the vitreous cavity postoperatively without an intra-ocular pressure rise were determined. The concentrations were calculated for three volumes of the vitreous cavity to test if ocular size influenced the results.