Marios joined the University of Surrey in June 2000 as Professor of Structural Systems. He originally trained as a Naval Architect at the University of Newcastle and MIT, and then read for a PhD in Structural Engineering at Imperial College where he was also employed as Lecturer and British Steel Reader in Structures from 1989 until 2000. Before embarking on an academic career, he worked in industry with Flint and Neill on the design of aluminium bridges and with Det norske Veritas on the reliability of offshore structures. His research focuses on risk-based performance of structures and infrastructure systems and the development of decision support tools for asset management, for which he has been funded by EPSRC, the European Union and industry.

He has published over 150 scientific articles and several book chapters and has lectured widely in the UK and overseas, including a fellowship in Japan sponsored by the Japan Society for the Promotion of Science. He has acted as the convenor of an international working group on structural reliability and probabilistic design, operating under the auspices of the Joint Committee for Structural Safety (JCSS) and has served on national and European advisory and codification committees, including the UK Standing Committee on Structural Safety (SCOSS), the Eurocode 3 Drafting Panel on Shell Structures and the working group on the revision of ISO2394: General Principles on the Reliability of Structures.

Marios has served as the external examiner of undergraduate and post-graduate programmes at the Universities of Aberdeen, Edinburgh, Newcastle and Trinity College Dublin, and has been a PhD examiner in over 20 universities both in the UK and overseas. He is an editorial board member of Structural Safety (Elsevier), Journal of Earthquake Engineering and Structure and Infrastructure Engineering (Taylor and Francis).

These relate to how randomness, variability and uncertainties in human and organisational factors influence the response of structural and infrastructure systems subject to natural and man-made hazards, and the development of risk-based performance standards. Over the past twenty years, a wide range of experimental, analytical and design-orientated studies have been undertaken, encompassing steel and fibre reinforced composite plates and shells, concrete and steel building frames, as well as metallic, concrete and FRP bridges. Increasingly, research has been directed towards the integration of advanced structural engineering and structural health monitoring into consequence analysis and loss estimation in support of risk-informed decision-making tools for structural systems and infrastructure networks. In the course of these investigations, he has supervised over 25 PhD theses and numerous MSc dissertations, has collaborated widely with industry and academics, and has co-authored over 150 publications in archival journals and international conference proceedings; examples of recent research projects include:

From 2001 until 2004 Marios acted as the Director of the Engineering Materials and Structures Research Centre, comprising 10 academics and over 30 research students and assistants. Subsequently acted as Deputy Director of the Centre for Materials, Surfaces and Structural Systems, a larger grouping which included chemists and materials scientists, as well as civil and mechanical engineers. In 2006, he was appointed to the RAE Task Group for the School of Engineering, which prepared the submission to General Engineering for RAE2008. From October 2007 until November 2012, he served as Head of the Division of Civil, Chemical and Environmental Engineering, one of the largest academic units in the Faculty of Engineering and Physical Sciences. 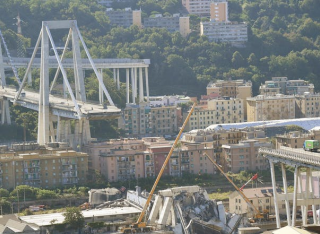 Why bridge maintenance is as important as good design

Steel-concrete-steel (SCS) sandwich panels are an efficient means of achieving a strong and stable composite wall. Development in the 70's and 80's focussed on tunnelling, with other applications, particularly in the defence and offshore sectors, appearing later.

Renewed focus has been placed on the system in recent years due to a proliferation of proposals for new nuclear power stations in Europe. Many new nuclear projects that have been completed in recent years have been significantly delayed by problems with reinforcement congestion. SCS construction offers a potential solution to this, since reinforcement is either significantly reduced or eliminated entirely in most designs. As a result of this renewed interest, industry has sought to develop improved design rules, both for economy and easier regulatory approval.

As with any composite system, the strength of the system is derived from the ability of the materials to interface efficiently with each other where they are connected. Review of existing design guides and research showed a gap in understanding of the effects of shear connection on the overall behaviour of the system, particularly when resisting out-of-plane loads. This thesis aims to improve this understanding, leading to improved design provision and a wider range of applications for SCS panels in industry.

An extensive literature search found a large body of test results. However, the majority of these tests are for designs where shear connection is over-provisioned, meaning shear connection is not critical. The tests that were conducted with lower degrees of shear connection were found to be insufficient to draw definitive conclusions about changes in behaviour. For this reason, numerical modelling using finite element analysis was used to supplement the test data. A validation and verification exercise was performed, which showed that the model accurately predicted the behaviour seen in testing, for all of the relevant failure modes.

This thesis focusses on the three design checks that are required for panels subject to out-of-plane loads; bending resistance, shear resistance and deflection. The effect of reduced shear connection on each of these design checks is explored in turn.

For bending resistance, design rules based on first principles cross-section equilibrium are found to accurately predict the point of failure for the majority of cases. However, the existing assumption of a smooth profile of shear connector force is found to be incorrect on the tension plate, with tensile cracking leading to discontinuities in the stud force profile. Further interpretation of this result shows that this can lead to an unconservative prediction of the failure load when a panel with a low degree of shear connection is subject to a uniformly-distributed load (UDL). A new design rule is presented for this situation.

Design equations for shear resistance are found to vary considerably between design codes and countries. As with the bending check, the test database is found to be lacking in tests with low enough degrees of shear connection to draw definitive conclusions about any changes in behaviour. A parametric FE study is presented to investigate these effects. The study focusses on varying the degree of shear connection for groups of beams loaded at different shear-span to depth ratios. Different behaviour is observed in each group, with the influence of shear connection varying, depending on which shear transfer action is dominant. The study shows that unconservative predictions are made for a number of the design models, particularly for slender beams with low degrees of shear connection. A new adjustment is presented for the Eurocode shear resistance model that removes the unconservative predictions. The models from the fib Model Code are suggested as a better alternative, again with some adjustment to account for reduced degree of shear connection.