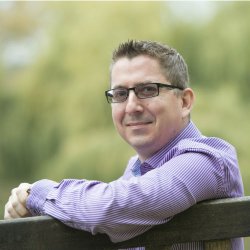 I obtained an MMath degree at the UEA in 2002 before completing my PhD in Fluid Dynamics in 2006, also at the UEA, under the supervision of Dr Paul Hammerton. After this, I spent 3 years at the University of Exeter working with Prof. Andrew Gilbert, before moving to the Sir Harry Ricardo Laboratories at the University of Brighton, where I worked with Prof. Sergei Sazhin, Prof. Jonathan Healey (Keele), Dr Renzo Piazzesi (ANSYS UK Ltd) and Dr Cyril Crua.

I started as a Lecturer at Surrey in May 2011 and was promoted to Senior Lecturer in 2016. I'm currently enjoying fruitful research collaborations with Prof. Tom Bridges on sloshing and dynamic coupling of fluid systems and Prof. Ian Roulstone, Dr Bin Cheng and Prof. John Norbury (Oxford) on convection in a moist atmosphere.

My research interests lie in the field of fluid dynamics, in particular:

For more information on my research interests, see the research page of my personal web site.

For more information on my publications, including draft copies of papers, see the publications page of my personal web page.