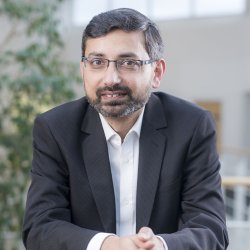 Dr Muhammad Ali Imran received his M.Sc. (Distinction) and Ph.D. degrees from Imperial College London, UK, in 2002 and 2007, respectively. He is currently a Reader in Communications in the Institute for Communication Systems (ICS - formerly known as CCSR) at the University of Surrey, UK. He has lead a number of multimillion international research projects encompassing the areas of energy efficiency, fundamental performance limits, sensor networks and self-organising cellular networks. He is also leading the new physical layer work area for 5G innovation centre at Surrey. He has a global collaborative research network spanning both academia and key industrial players in the field of wireless communications. He has supervised 20 successful PhD graduates and published over 150 peer-reviewed research papers including more than 20 IEEE Transaction papers. He has been awarded IEEE Comsoc’s Fred Ellersick award 2014 and FEPS Learning and Teaching award 2014 and twice nominated for Tony Jean’s Inspirational Teaching award. He is a shortlisted finalist for The Wharton-QS Stars

He has active collaborations with researchers from different parts of the world: USA, Europe, Middle East, China, Brazil, Australia and the Subcontinent (India and Pakistan).

He has also lead the multidisciplinary research (the REDUCE project) collaborating with researchers in Psychology, Environmental Studies, Economic modelling and Scholarship of Teaching.

EE3.DCM - EEE3006 (University of Surrey, UK): Module Leader Since 2008 Digital Communication and Modulation: 20 Hours of Lectures for final year undergraduate students and MSc students. A group of around 100 students.