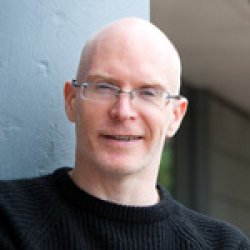 I am a poet, publisher and Senior Lecturer in Creative Writing at the University of Surrey. I have been writing poetry seriously since the late 1980s, in Dublin initially, where I completed a BSc in Management Science (TCD), and later in London where I have lived since 1994. There, I completed a second degree, a BA in English Literature (Birkbeck, University of London), and went on to gain my PhD in temporality and contemporary poetics (Birkbeck) in 2009. During this period, my writing and poetics changed significantly, with a focus on contemporary and experimental language and form.

In 2003, I co-founded the small press, Veer Books, which has published over 100 publications to date, and is now one of the most significant small poetry presses in the country. I remain an associate member of the Contemporary Poetics Research Centre at Birkbeck, and am one of the organisers of the Writers Forum Workshop (new series) poetry workshops. In 2012/13, I was the Poet in Residence at the University of Surrey.

My poetry has appeared in various places and web-places, including as part of the performative poetry grouping 'London Under Construction'.

My books, DCLP and Shuddered, the latter co-authored with Aodan McCardle and Piers Hugill, were published by Veer Books in 2008 and 2010 respectively, while The Cursory Epic (2014), 663 Reasons Why (2016) and Ratzinger Solo (2016) were published by Contraband Press as a trilogy of books.

Why study for a Masters degree in English literature or creative writing?

I am interested in supervising PhD projects in the following areas:

Natalie Isabelle CawthorneThe Mindsweeper Tales: A Creative and Critical Approach to Reinventing the Medieval Framed Story-Collection as a Modern Novel

Wafik DossTrail of a Syllable: The Advance of Politics through Literary expressions- Revolutions and the word

Anna StearmanThe body on the parapet: Experimental feminist poetics and embodied and textual practice in the semi-ˇderelict suburban space.

Konstantina GeorgiouThe translator as reader: the case of poetry translators from Modern Greek into English

Janice McFarlaneRecovered Voices: Poems based on the translation and interpretation of women’s letters from and to the Paston family of fifteenth-century Norfolk

Claudia Davidson Thinking up, Writing Down: The creative process of imaginative writing

I am currently teaching creative writing theory and practice, poetics and English literature  modules such as:

I am also supervising a range of PhD projects in the School of Literature and Languages.

“That the ex-Pope, Donald Trump, and Han Solo continually survive as characters, despite radical inconsistencies in public declaration and perception, obviously has something sinister about it. What’s the fuel of their survival, if not ‘our’ flesh and blood, translated into code? This book’s operation is un-translation. Back to the real inside the speech. Something is happening which exceeds existing understanding and description of the operation of power, and goes beyond existing critique of language – something other than hyper-reality, hyper-instrumentality, fetishism of reference, degradation of language, ‘post-truth’. Complex meldings of theology of sacrifice, business discourse, political rhetoric give some paths to follow. Ratzinger Solo shows an essential part of what it means to be inside this situation.” William Rowe

In A Thousand Plateaus: capitalism & schizophrenia, Deleuze and Guattari, pose the question: ‘Problem II: Is there a way to extricate thought from the State model?’ in relation to war machine of Nomadology that they propose (that which exists outside of the State as mechanisms of resistance). This is also a question that William Rowe’s poetry of resistance in his collection, Nation, raises and attempts to address. This article examines ways in which Rowe’s innovative poetry, in the context of revolution and resistance, provides a nexus for thinking through the space of the language of change. In this book, Rowe seeks to expose, undermine, reposition and remake the language formulations of imposed, orchestrated and co-optated oppositional stances that the State, and the organs of the State (military, police, finance, justice, politics, religion), foster and reformulate into its own managed space. It proposes a poetic war machine of 'response'. I examine the strategies of resistance that this text brings into being and offers to the reader, both in relation to its own poetic action and to that of other innovative poetries. In so doing, I demonstrate the poetic war machine and its shifting, variable intermezzo spaces as a mode of resisting not just languages and strategies of control, but also the very processes of co-optation that these employ in stealing and negating the spaces of resistance and revolution from the language of the populace and of poetry.

This article presents an overview, from a publishing and poetics perspective, of innovative women's poetry in the United Kingdom in the present day, examining some of the issues around access and representation of women's writing in that context. Conferences, festivals and anthologies are considered, alongside information from poetry publishing houses in the field, including a reading of the current scape of innovative women's writing in the United Kingdom from the author's perspective as an editor of Veer Books. The convergence of transgender identity and that of women in key issues of identity space and visibility in terms of innovative writing (both practices and spaces) is also proposed.

"Selections from the three bodies of work written during our collective time at the Contemporary Poetics Research Centre (CPRC), Birbeck ... selections of this work also stem from the performances and publications of the "London Under ...

This text is a transcript of a performed article at the Forum for Women Writers at Birkbeck College in 2007. Aodan McCardle, Piers Hugill and Stephen Mooney represented London Under Construction (LUC) at the forum.

Creative Review for the Readings Literary journal of MJ Weller's Secret Blue Book. MJ Weller’s three part Secret Blue Book is a work that very successfully walks the line on the pornographic issue (so to speak); it is clearly not a pornographic work in that it scrutinises, and speaks about, the pornographic gaze, and the language of porn, and is not in this sense reducable to these forms; at the same time it is equally clearly a work of undisguised pornography, utilising as it does, both pornographic content and technique to achieve a form of linguistic pornography that it uses to critique the genre itself.

British writer STEPHEN MOONEY says we need the Beats’ example of resistance to oppressive conformity more than ever.

Lee Harwood’s poetry employs a disjunctive temporality that is both multiple and unfixed in relation to the visuality of the page as well as to the live poetry reading (performance). Cinematic techniques (such as framing and cutting) complicate both the visual and temporal fields of the poem. Paying particular attention to oral recordings by Harwood, I examine the temporal complexity a reading of his poems displays and brings into contact with the reader/listener. Positing a temporal operation that is disjunctive, unfinished and unfixed, I propose an openness in Harwood’s poetry to external and internal temporal factors that engage both the poem and the reader/listener, and link this to background temporality. KEYWORDS background temporality • frame • Lee Harwood • poetics • poetry reading • temporality • visuality

Stan Brakhage, as one of the foremost avant-garde filmmakers of the 20th Century (indeed right up to his death in 2003), has offered viewers of his films an expanded sense of what the camera can achieve. His influential development of theories of ‘hypnogogic vision’ and ‘moving visual thinking’ complicate the ways in which viewers of his films experience the visual. What is presented on the screen often reflects a discontinuous sense of the camera as eye. What is seen on the screen, and what can be seen, is not presented to us as a cohesive, non-negotiable actuality, but rather as a complex unearthing of cinematic techniques that relate to the physical aspects of seeing, and that engage with the viewer’s own sense of the visual. This paper seeks to show ways in which Stan Brakhage’s ‘just seeing’, and his achievements in cinematic technique in this area, are useful, in an expository way, in the contextualisation of some of the poetic techniques and strategies used in contemporary poetry in relation to the formulation, and manifestation, of complex temporal structures that invoke a sense of ‘Background Temporality’, or sense of temporal engagement that informs the poetry, and the performance of the poetry, at a given time, in a given place, to a given reader or audience. I will demonstrate, in relation to avant-garde and contemporary strategies of representation, such as those adopted in Brakhage’s cinema, how these poetries can engage with forms of discontinuous visuality, visuality that is fractured and multiply activated, particularly in terms of its temporal operation. Specifically I will look at some examples from the poetry of Lee Harwood, Bruce Andrews and Joan Retallack.

The Cursory Epic - in which YOU are the Hero! Drawing on language, imagery and the distinctive "multiple-choice" format employed in eighties' fantasy fiction and RPG, Stephen Mooney's Cursory Epic takes the reader on an socio-political nightmare adventure - from the Shumanti Hills (where the reader will be faced with tricks and fantasy as venture capitalism) to Khare, Cityport of Traps (where every doorway and alley may conceal the Coalition Agreement). Will you secure the Cursory Spellbook required to bring order to the United Kingdom? or will you fall prey to the Seven Serpents? The legendary grasp or is it? In this late modernist epic, YOU are Porky George Osborne (Hero) - and the fate of the Big Society is in your hands! (Oh - and Rihanna Worships the Devil.)