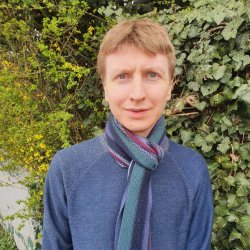 I am a postdoctoral research fellow in the Surrey Morphology Group (SMG), a research centre hosted by the School of Literature and Languages. Before joining this group, I taught linguistics at UCL and at the University of Oxford, where I also completed a doctorate in General Linguistics and Comparative Philology.

My current work, under the auspices of the AHRC-funded project ‘External Agreement’, looks primarily at the grammatical organization of several languages belonging to the diverse but little-known Nakh-Daghestanian family, spoken in a mountainous region of the Northern Caucasus. In a previous project, funded by the French Agence Nationale de la Recherche, I worked on Northern Talyshi, an Iranian minority language spoken in Azerbaijan. For this project I glossed and translated into English a collection of folk tales compiled by a native speaker of the language.

My doctoral and Master’s level research projects investigated different aspects of the development of the verb system from the unattested ancestors of Latin through to its various daughter languages, including lesser-known varieties such as Romansh. My doctorate looked in particular at the morphological phenomenon of heteroclisis, in which a word seems ‘unsure’ which other words in the lexicon it ought to pattern with.

My research interests include:

Since 2018 I have worked as a postdoctoral research fellow on the AHRC-funded project 'External Agreement', with Marina Chumakina and Oliver Bond. This project looks primarily at the grammatical organization of several languages belonging to the diverse but little-known Nakh-Daghestanian family, spoken in a mountainous region of the Northern Caucasus. Languages belonging to this family display a cluster of properties which are highly unusual from a global perspective, and which raise questions for linguists aiming to understand the mechanisms that speakers use to combine words into sentences. On this project I have undertaken fieldwork in the village of Zilo (Russia), as well as surveying the existing linguistic literature for other examples of the unusual ‘external agreement’ behaviour in question, which will be compiled into a searchable database.